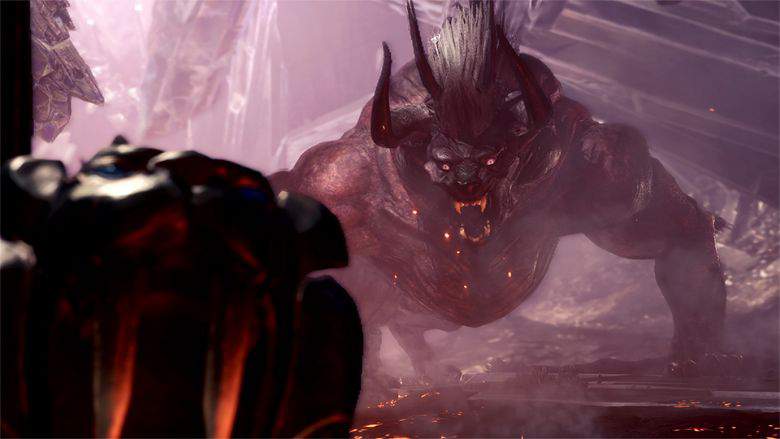 Fellow hunters, it’s time to grab your squad members and prepare yourselves for the Monster Hunter: World crossover event with Final Fantasy 14! Launched on August 1st, a mysterious aetheryte shard brings an invasion of cactuars (and one adorable moogle) to the Wildspire Waste. Not everything it brings is cute and fun though, as it also summons the fearsome behemoth to the Elder’s Recess to challenge hunters like never before.

Hunters begin this event with the Serious Handler informing them of some strange occurences in the Wildspire Waste. There are cactuars running all over the place! Hunters can capture these quick critters with their nets and show them off in their rooms. Following the trail of cactuars leads to the discovery of the aetheryte shard and the moogle trying to guard it so he can return home. Unfortunately, the crystal quickly gains the interest of the rock-obsessed Kulu-Ya-Ku, who snatches it! Hunters will obtain the special assignment A Visitor from Another World where they are tasked with putting a stop to the super-powered, and constantly growing, Kulu-Ya-Ku.

Once the lovable chicken has been slain, hunters will return to Astera where they are informed of a greater threat to the New World. Heading to the Elder’s Recess, hunters will come face-to-face with the fearsome form of the behemoth. On top of its gigantic size, this monster packs a punch that most hunters will not be prepared to face. Designed as a raid boss as a nod to its origins in Final Fantasy 14, hunters will want to join up with three friends to take on this foe. From devastating lightning attacks to tornadoes that chase you across the field (called Charybdis), hunters will be running and dodging like never before. To make matters worse, behemoth has a super-powered move named Ecliptic Meteor which brings a gigantic meteor crashing to the field. This move will instantly kill any hunter, regardless of location, unless they are huddled behind one of the small comets he drops or use the special Final Fantasy 14 gesture given to all players.

Behemoth will challenge players to utilize strong team communication and break out their best armor and weapon sets. The fight will be worth it though, as collecting all of behemoth’s parts will allow hunters to build the drachen armor set and the Gae Bolg insect glaive. Both items are extremely powerful resources to have and are some of the best items released in the game to date. Even palicoes can get in on the fun with a special moogle armor set. So although behemoth is challenging, it is proving to be one of the most satisfying adventures the game has offered to hunters. So get out there and prove your worth hunters, for our sapphire star!

The Big Bang Theory Is Not Over Yet