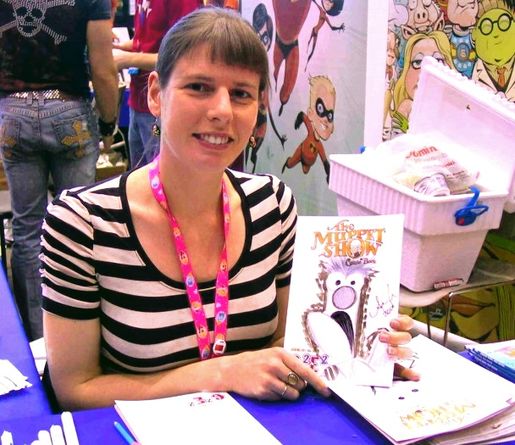 At Wondercon, fans wait for hours to meet the artistic geniuses behind their favorite comics. I was lucky enough to meet one in particular, whose work has been shared by people on my facebook ages 8-67. The woman in charge of the Pocket Princesses series. 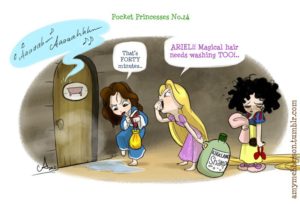 Pocket Princesses is a comedic series about a hypothetical situation where all of our beloved Disney princesses share a space together and spend their time hanging out and bonding. Most of us have dabbled in  scenarios like this when we were younger playing pretend, so it’s no wonder so many people are fans of how charming and entertaining it is.

We asked the creator, Amy Mebberson, how she began her journey: 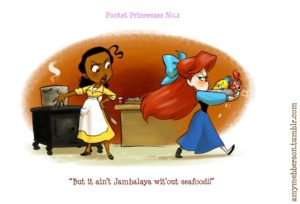 “Pocket Princesses was something that pretty much engaged people immediately from the very first posts. The first one was only a rough pencil sketch, but people loved the gag and I decided to try another one presented a little more properly (Tiana’s ‘Jambalaya’ one) and it did even better. I pretty much figured it was a viral hit then!”

Most people who have seen or shared her work can remember seeing them pop up as early as 2012. One of the biggest draws is by far how endearing each princess acts. Seeing the princesses whose personalities we loved growing up portrayed in a totally new and usually hilarious setting is what people tend to love about each comic strip. Not only can we see the princesses acting this way, but it feels like a completely real reaction as well. We wanted to know, “do you ever base the characters reactions off of people in real life?” to which she replied: “No, the writing on the Princesses is all based on their own personalities, I don’t think I’ve ever drawn from reality. The Princesses are their own people!” 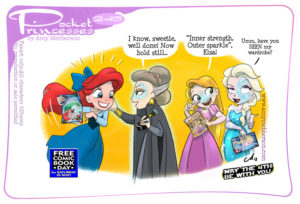 In California especially, you’ll meet the most hardcore of fantasy book fans. Amy was of course no exception, and has been an avid fan ever since she was young. She cites growing up with Beatrix Potter and Richard Scarry as some of her biggest influences. “I’ve drawn pretty much ever since I was 2 and drew my own little comic strips from about the age of 8. I always wanted to do book illustration too.” She remarks, and goes onto tell us that “it’s a huge thrill to now be doing storybooks for Disney!”

We wanted to know if she ever had any plans to stray away from Disney Princesses, to which she thankfully assured us “I get asked constantly if I’ll do Pocket Princes/Villains etc. People tend to forget these little comics still take time to make and even more aren’t aware that I’m an active working professional artist. […] Princesses are my love and that’s where my passion lies.”  So don’t worry Pocket Princesses fans, Amy’s personal devotion for Princesses won’t waver any time soon. 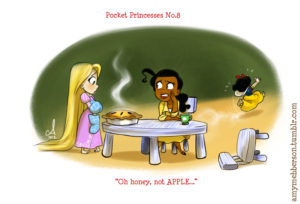 When asked what new work she has in store for everyone in the future, she luckily promised us that she has projects we can look forward to.

“All I can say is I’m always working with Disney or Hasbro on something Disney-related. Lots of little pies in the oven, but nothing I can talk about publicly yet.”

Well, we’re so excited the surprises she has in store, and can’t wait to continue reading her work. Check out Amy Mebberson website: http://www.amymebberson.com/ as well https://www.facebook.com/pocketprincesses/ for Pocket Princesses comics you can “share” straight to your facebook wall!