4 Kids Movies that are Darker than You Remember

I’ve never been one to be obsessed with movies from my childhood. I re-watch them on occasion as a gentle reminder of a simpler, sweeter time in life, when singing on the bus was adorable and not unnerving. Can I still sing “Can’t Keep a Good Dog Down” on command? Of course. Did I get a brown dog and name him Charlie? In fact, I did. Do I sleep in a junkyard? Unfortunately.

My nephew tends to watch the new stuff, Pixar and a bunch of TV cartoons that are a hell of a lot funnier than anything that was ever on Heathcliff. (Only 90’s kids will remember). A few years ago I was riding in the back seat with him while he was watching a DVD. I wasn’t really paying attention until I saw him freeze up and his eyes widen. He patted me on the arm.
I immediately recognized the movie as one of my childhood favorites, The Secret of Nihm. I remembered a brave mouse with an amulet, a cutesy mouse house made out of a cinder block and a funny bird. I totally forgot the devil owl with the eyes of pure evil and fire that wants to eat the plucky little mouse. 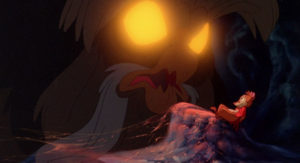 Guys, cartoons from my childhood were dark.

Get ready to pull the covers over your head, because it can’t get you if you can’t see it.

All Dogs Go to Heaven

What you remember: Griffter dog, voiced by Burt Reynolds, saves lovable orphan and helps her find adoptive parents in between musical acts.

Let’s not clutch our pearls over the fact that the dogs drink, gamble and smoke constantly. Or that one of the dogs has access to a submachine gun. It was the 80’s. Let’s be glad they didn’t give Carface a coke problem and a hooker with a heart-of-gold girlfriend. Dogs are strange creatures, who knows what they would do if not beholden to us humans and our tedious “sit” and “stay” rules. Or the fact that Anne Marie’s care is basically “Child Abuse 101”. They say kids don’t come with a manual, but if I was a doctor, every time I delivered a baby I would hand the parents a copy of the movie and say. “Watch this. Everything in this movie –do the opposite and you should be fine.” Charlie spends the run of the movie exploiting Ann Marie’s ability to talk to animals to fix the odds on things like frog races, which apparently was all the rage in the 1920’s.

Let’s talk about when Charlie goes to Hell. 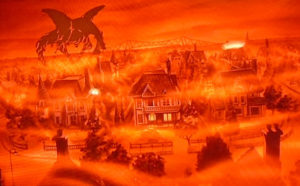 Charlie goes to Hell, a historic moment for dogs everywhere. Not some jokey, situational Hell –Hell is a DMV waiting room, perhaps hell for dogs would be constant doorbells and vacuum cleaners –Charlie goes to full on fire and brimstone. Dante Hell. Lakes of lava and rains of ash, skeletal dinosaur creatures and demon imps that chase him into the inferno. Charlie is terrified, Charlie pleads for forgiveness, pleads for his soul. Remember, this is moments after a lighthearted song about sharing pizza. Charlie is damned to hell for eternity, he awakes with this certainty. When his time runs out (literally represented by a fragile pocket watch –perhaps illustrating the fragility of life?) this is what eternal torture awaits him. All for stealing a time piece from a distracted, sexually charged poodle. 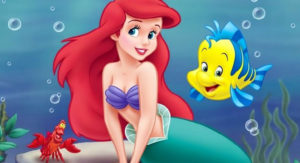 What you Remember: Jaunty Calypso music sung by a crab and a small mermaid turned mute human.

Putting aside that Ariel marries a prince of a fishing community which supports itself by massacring her musical buddies, and the fact King Triton is neck and neck with Walter White for Worst Father of All Time, The Little Mermaid seems like your typical upbeat Disney movie. Bright and filled with catchy songs, pretty princesses and princes and lessons. The lesson here is… I don’t know what the lesson in The Little Mermaid is. Fear change? Never trust an eel? Guys will love you if you’re pretty and quiet? Hopefully it’s the eel thing.

After Triton smashes Ariel’s cherished collectables like a redneck dad just back from a bender, Ariel does what any rebellious teenage girl would do –strike a bargain with a famously evil sea witch for her immortal soul so she can hook up with the cute dude she saw at the food court. It’s a part of growing up.

We can discuss whether or not fish have souls all night. For the purposes of this film, they do. Ursula invites Ariel into her literal garden of imprisoned souls, horrific husks with tortured eyes, squirming along to her bawdy dance number. How many times have these miserable beings witnessed her luring a victim with this very song? They certainly seem to know the words.

Let’s talk about the word “victim” as used here. Ariel is not a victim. A paste eating idiot, sure. Ariel full well knows the deal she is striking with Ursula. Ursula is never coy about what’s going on, she even offers visual proof of what the consequences are. Not only does Ursula spell it out in song, she hands her a written contract that Ariel is welcome to take a moment to read rather than click “Agree”, like it was Facebook’s Terms of Agreement. If Mark Zuckerberg sashayed around the room singing about the right to sell your personal information maybe we all wouldn’t be so mad at him.

The Land Before Time 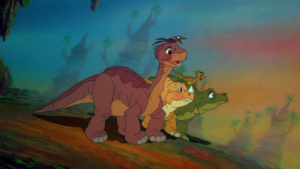 What You Remember: A plucky group of dinosaurs need to make it to The Great Valley to avoid extinction.

There’s just so much to choose from in this one. I used to watch this movie once a day before the tape wore out. I may have moved on to All Dogs Go to Heaven at this point. There’s no booze filled musical numbers in here and most of the Commandments stay intact. Probably. I don’t know them all, just the big ones. There’s probably something about Thou Shalt Not Be a Dinosaur. I think a guy on the bus handed me a pamphlet on that.

Years before Mufasa did a soft job of explaining the Circle of Life, the lion’s equivalent to explaining death to a child (“Your fish was sick, so daddy took him to a farm upstate”) in Disney’s The Lion King, Don Bluth decided that kids needed to know that life is brutal. All of the eggs Mrs. Littlefoot laid were eaten by predators, prefacing early that she’s a little neglectful of her children. The dinosaur equivalent to leaving your kids in the car on a hot day to get cigarettes. Also, dinosaurs are giant racists. Much like the aforementioned chain smoking Mom with an ex-boyfriend’s name tattooed on her thigh, Mrs. Littlefoot cracks a Coors and calmly explains that dinosaurs don’t have anything to do with other dinosaurs that look different from them, just because that’s the way it’s always been and shut the hell up. Just in case you ever wondered how racism happens, here you go folks. 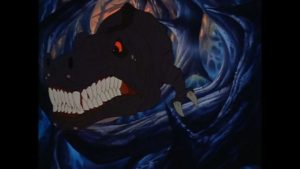 That is the moral of the story though and it’s a good one, because the kids do realize that there parents’ bigotry is ridiculous and become good friends and value each other’s differences and individuality. In the meantime, the are relentlessly pursued by Sharp Tooth, a horrifically enormous Tyrannosaurus rex that isn’t satisfied with just murdering Littlefoot’s mother, but her son and all his friends, like a mob rival out for revenge. In one particularly disturbing scene, he chases Littlefoot and Sara through a … thorn forest? I’m no horticulturist. It’s pretty foreboding though and at one point he gets stabbed in the eye. Even that doesn’t deter him from murdering these morsels. It’s kind of like me burning down a McDonalds to get a four piece Chicken McNugget. Of course, the gang eventually teaches him that friendship is magic and he learns his lesson.

Oh right, they use their friend as bait and murder him with a giant rock. 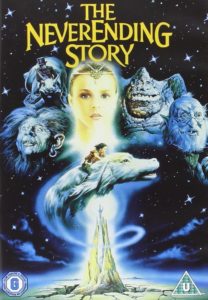 Full disclosure: I never really sat down and watched this movie from beginning to end until a few years ago. I had a friend as a kid who would demand that we watch it every time I came over because she was bossy and mean and our parents were friends. I tuned it out in protest. I related this to my husband, who left mid-sentence and returned a half-hour later with a copy of the movie.

Everything about this movie is weird/dark/terrifying. A kid bullied so badly he has to hide in an attic. A sentient book. Rock monsters and bad dubbing. A creepy carpet dragon with a dog face. The fact that the kid who played Atrayu nearly died making it. Gmork.

But you all know what I’m going to talk about.

I don’t cry a lot in movies. Maybe the lone tear when Rose won’t let Jack on the door, or a little misty whenever Littlefoot cries “Mother”, only to realize it’s not his mom, just an enormous shrub. It’s happened to me when I get lost at the mall. But when that horse gave up the will to live I didn’t cry.  I sobbed. Ugly, Claire Danes –crying. I couldn’t even understand what was happening. I was so inconsolable my husband had to stop the movie, generally concerned and feeling bad he had even shown it to me. They only thing I could choke out was, “What does a horse have to be so sad about?” What was going on in that horse’s mind? What darkness couldn’t the horse overcome, that even as his best pal begged him to make it through the Swamp of Sadness, he couldn’t? How much emotional pain did that poor horse have bottled up in his heart? If a horse can be that sad, what hope do any of us have? He knew his buddy needed him, but he was too tormented by his horse demons and even as he looked Atrayu in the eyes, listened to his assurance that everything would be okay, he knew he had lost the battle.

Now here’s a video of Under the Sea!

What family-friendly films do you think have a dark side? Let NERDBOT know in the comments.