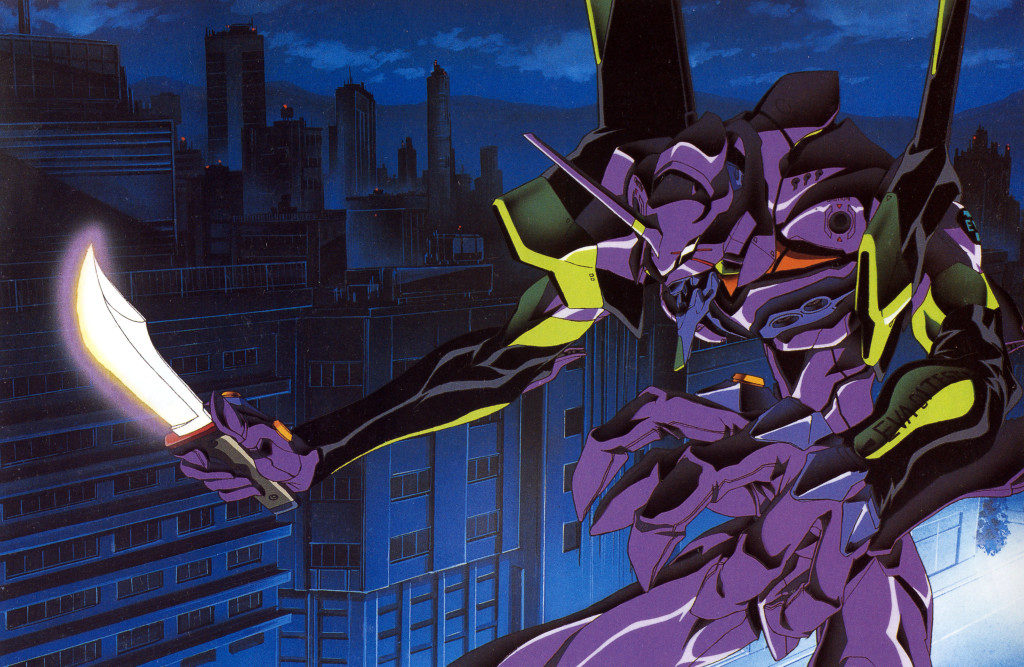 They’re some of the most brilliant things that ever happened to television. While many have fond memories of watching old school Godzilla films, waiting for that big, lumbering dino-dragon to wreak havoc, huge mech are my emotional magnet. There are few things more exciting than turning on a new Power Rangers season or new mecha anime and not only geeking over the design of the robot, but seeing it blast some baddies in action is nothing short of electric. But what happens when you tune into what you thought was a mech show just to have the actual robots be put on the backburner?

Like bait, the mecha lured you in with promises of battles, fire, and lasers…only to realize…wait a second…is this a SOAP OPERA? That’s the sad case with some of our metal monsters today, which is why we’re counting down the shows that sometimes forgot they had robots to make it awesome.

5) The Lost Galaxy Megazord Got Trampled by his Predecessors

It’s exceedingly difficult (if not impossible, really) to compete with the majesty that is the original Mighty Morphin’ Power Rangers Megazord. First and foremost, it was the OG Daddy-Zord brought to us by the dark lord and master, Sir Chaim Saban, when he obtained the Super Sentai license from Japan, bringing over the sixteenth season, Kyōryū Sentai Zyuranger. He morphed it into the masterpiece flagship about a team of teenagers with attitude we know today, and from there, it was all magic…and marketing…and investment funds…and…stuff. Pair it up with the elusive Green Ranger’s Dragonzord and oof…I’ll be over here adjusting my pants.

But alas, the Mighty Morphin’ Money Train ran out, and America had to move on to other seasons of Power Rangers. The most exciting part of the show was; one, the variation of the Ranger suits. Two, the appearance of the “bonus” ranger (the green, white, gold, black, etc. depending on the season). And three, the Megazord battles. It’s always been about the robots. And while certain seasons of Power Rangers are less memorable than others, there’s one specific megazord that doesn’t get the love it deserves.

And that is, the Power Rangers Lost Galaxy megazord. What a beauty! It has the chunkiness of Voltron and an old-school Gundam combined. Sure, the show’s plotline might be a little…difficult to remember. And yes, those striped costumes are the Charlie Brown of all Power Ranger uniforms.

But if nothing else, watching that Megazord come together is more titillating than a Magical Girl Transformation sequence.

2) Gundam Wing’s Robots Were Upstaged by The Drama

The Mobile Suit Gundam franchise undeniably has some of the most brilliantly designed mechs in anime history. And while Mobile Suit Gundam Wing most certainly wasn’t the first Gundam series by any means, it was aired on Cartoon Network’s Toonami block in the early 2000s and became more popular in America than it was in Japan.

While impeccably animated with some of the most stunning action sequences, Gundam Wing was heavy. And layered. Probably too layered. And dramatic…oh, so dramatic. Dramatic to the point where it sometimes plays out less like a mech show and more like a soap opera. The first 3-4 episodes of the show are even shot and staged like a soap opera, particularly the flowery scenes that involve Relena, rich and at home, inviting Heero to her birthday party where he promptly threatens to murder her. And while the show exploded in popularity, finding merchandise of the mind-blowingly awesome robots was surprisingly difficult! But you know what wasn’t hard to find?

Posters of Heero with his hand over his face.

Posters that paired up Wufei with Treize.

Declarations of “shipping” between Trowa and Quatre.

And when I turn on a random episode of the series, at any point, (beginning, middle, or end) do you know what I do not see ample amounts of?

Sometimes I can’t help but wonder if people were actually fans of Gundam Wing for the amazing mechs Maybe they were pulled in by the drama.

Or possibly…they were just watching in hopes they’d see those boys kiss already.

Hear me out before you yell at me.

There are few shows that stand up to the aesthetic design of Neon Genesis Evangelion. What with the original robot designs, light and limber that looked like nothing else that had come before it, the show added a whole new spin to the big-robot genre. Combine that with a theme song that was arguably more memorable than some of its episodes and you have a mecha-anime staple. And that it was! The show followed mental health poster child Shinji Ikari, who gets summoned by his puppet-master megalomaniac father Gendo Ikari to pilot the purple and green Eva Unit 01. Or rather, get plugged into it and go insane.

Evangelion is a heavy, surrealist show with many abstract questions and vagaries. It’s one of those shows that draws you in with promises of robot fights, but makes you stay for the complicated interpersonal relationships between characters.

It also really wants you to look at Rei Ayanami, Gendo’s dead-wife-clone-plaything in her underwear. Naked in bandages. Floating in suspension. However it can force us.

A quick personal anecdote: Back in 1999, when my anime obsession was beginning to peek and Evangelion was on the top of that list, a friend of mine told me he had an Eva video game for the original Playstation for me to check out. Sure, it was in Japanese- but I didn’t care because I was about to see some robots. No, not robots. Evan-freakin’-gelion. He brought over the game, booted up his Shark system to play Japanese games…

And this pile of Dating Sim nonsense started up.

And this isn’t even the only Evagelion dating sim game. It’s a franchise!

What were they thinking?! You have access to the most incredibly designed robots in anime history! Almost nothing looks cooler than an Evangelion in action. The Evangelion lopped off someone’s head!

Between Shinji and the “hospital scene” (you know which sticky situation I’m referring to), Pen-Pen the mascot, the hypersexualized female characters, and the surrealist (if not boarding on pretentious) “big question scenes”, it’s a disservice to mecha history that the Evangelion are upstaged in their own narrative.

2) The Magic Knight Rayearth Rune Gods Were an Afterthought

There’s something to be said about fantasy and mecha trying to exist in the same arena. In the mid-1990s, two (that I can recall at least, there might be more) fantasy-mech animes popped up. One of those was Magic Knight Rayearth. It was a really exciting story about three teenage girls from different schools and backgrounds all on field trips to Tokyo Tower. A flash of light sucks them away and the three are transported to a fantastical world, only to be told by a young, begging girl named Princess Emeraude that they are the only ones who can save this world. Therefore, the three girls (Hikaru fire element red, Umi water element blue, and Fuu wind element green) must become the Legendary Magic Knights and save the world from perils alongside a colorful cast of characters, a little item-carrying mascot named Mokona, a boy-elfin love interest warrior, and some other stuff.

Excellent. We have a fantasy/JRPG story.

But that is where our disjointed “Wait, where are the damn robots?” conundrum comes into play. Fantasy shows have an (overwhelming) tendency to take place in the past. Not necessarily a constant trope, but that’s typically the setting we’re provided (please see Game of Thrones, Xanth, Easrthsea, Lord of the Rings, A Court of Thorns and Roses, Throne of Glass, World of Warcraft, Dungeons and Dragons and other such fantasy worlds for confirmation). Mecha are typically saved for future or dystopian settings. But we can stray, that’s fine. Story telling is subjective. No argument there.

The problem is with Rayearth is that the setting is so rich, and the lore is so full and complicated that by the time the actual rune gods (IE, the robots) show up, they just don’t…do much. And I remember really paying attention to Rayearth, watching the entire first season religiously plus spending ample amounts of time with the patched RPG ROM for the SNES Emulator. I definitely remember seeing the mechas. I remember the episodes where the girls discovered them in their hiding spots.

But seriously, for how incredibly designed those robots were, they didn’t do anything. They were completely under utilized and treated like an afterthought. The girls’ rune gods could have been anything. But when you decide to make it a damn lumbering mech. Make it mech.

1) The Escaflowne Mech got Lost Between the Romance Line

The Vision of Escaflowne was another mid-90s fantasy anime that, like Rayearth, decided it needed a mech squirreled in there. The series wasn’t very long, only 26 episodes of spectacular animation. Nothing looked like Escaflowne. And while fitting into the genre of “I went to a magical world and now all the guys want to do me” (such as another popular anime at the time, Fushigi Yugi (The Mysterious Play)Escaflowne had one looming flaw, and it’s right in the opening theme.

We don’t see the mech that Van pilots.

It even takes over a full minute for the mechanical dragon to even show up. Gauging solely from the opening theme, you could blink and miss the robot. The show presents like a romance, really. A girl from another world (Earth) is caught in a dust cloud where her and Van’s timelines intersect and she is taken to another world. She meets fantasy human characters, including a hot guy named Alan with long blonde hair and a sword. Van is the sneering, accidental bad boy who doesn’t keep many people close, and therefore the love interest.

I’m going to go out on a limb and say “there’s this side plot about Van being the only person who can pilot his mecha, Escaflowne”. Side plot- I went there. Because really, the anime is about a girl from another world and the two guys who love her.

Maybe the reason that it flopped on Fox Kids back in the early 2002s.

Follow Loryn on Twitter and help her achieve robot nirvana. She also has a personal blog, and her debut novel My Starlight (a YA novel about anime, cosplaying, fandom, sexuality, love, loss, and friendship) will be released August 3rd, 2018 by Affinity Rainbow Publications.