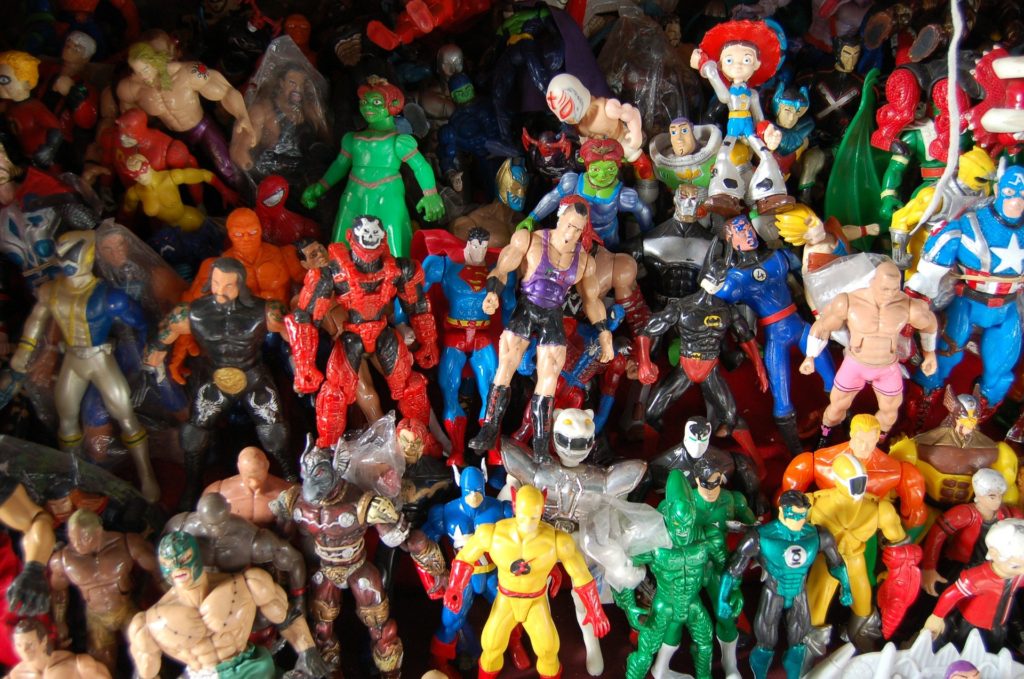 Toying with a Franchise

I recently took out a payday loan to see The Last Jedi in the theater. If I didn’t have a big purse to sneak in sodas and candy it would have been two loans.  Now, enough words have been written on the Last Jedi to fill every book in the world so I will be brief in my review. I liked it. That said, during one scene, it looks like a character may be about to meet the Jedi Temple in the Sky. As the tension built on screen, my cold practical mind obliterated it with the thought. “No way. Think of all the money they’d lose on toys.”

Cynical you say? Perhaps. Perhaps I had been corrupted by the Netflix documentary, The Toys That Made Us, which detailed the staggering amount of money that the Star Wars franchise has made on toys over the last forty years, much more than the films have ever made (not to mention the flop of the prequel toys –notably the amount of Jar Jar Binks toys created before the toy makers were allowed to see the film). It made me wonder just how much a film series like Star Wars can be shaped by toys.

Looking around my small, cluttered apartment as I write this, we have more Star Wars merchandise than food in the house. We have Star Wars glasses, Monopoly, action figures, posters, light sabers and t-shirts. We have no children. In fact, I have to patiently explain to my 6-year-old nephew when he’s over why he’s not allowed to play with his uncle’s collectable X-Wing while my husband clutches his talking Yoda to his chest like a petulant kid on the playground that won’t share. What my husband and my nephew have in common is that they are both collectors. The elder wants the memorabilia, collector’s items on display. The junior wants the toys, characters from the film that he can smash into one another and relive the movie in his own imagination. While toys and merchandising are a huge part of a successful franchise, most would assume that they were somewhat of an afterthought and not a factor in shaping the future of a series. Except when they are.

Tim Burton’s Batman was arguably one of the superhero movies that jump started the genre, a decade after Richard Donner’s Superman. It was dark and zany in the way that good Burton movies are.  Back in the days when a home with a VCR only had two or three tapes and at least one was recorded off of TV, Batman and Ninja Turtles were pretty much the only movies we had. I can quote Batman to this day and still not know what I’m talking about. Have you ever danced with the devil in the pale moonlight? Suddenly Batman was everywhere, the Batdance was part of our lexicon, I was terrified of Jack Nicholson, and we as a nation knew that Batman’s beverage of choice was Diet Coke. Batmania was at high tide. In 1992, Burton’s highly anticipated Batman Returns hit theater –and cost him the franchise.

You remember Batman Returns right? The one where Michelle Pfeiffer gets thrown out a window and starts dressing like a Hot Topic S&M enthusiast? Where she punctuates a sentence by licking herself? The one where Pee-wee Herman attempts to murder his disfigured child by tossing him in the sewer? The one where a bloated, misshapen Danny DeVito spends a majority of the movie in soiled long-johns and a good deal of time making grotesque sexual innuendo? Yeah, kinda hard to make toys at of Sexual Harassment Penguin.

Parents were incensed by the dark, frightening direction that Burton had taken in this movie so they did what I always do when I’m incensed by something, they complained to McDonald’s. McDonald’s had a licensing agreement with Warner Brothers to distribute Batman Returns toys in their Happy Meals. Obviously they couldn’t serve McNuggets with a toy that looks like a Todd McFarlane take on a bus flasher, so they offered up a cuter version of the Penguin.

McDonald’s corporately interposed in this controversy that they associated with Batman the character, stepping away from Burton’s vision that included De Vito graphically eating a raw fish. Still unhappy that McDonald’s was marketing a disturbing PG-13 film to the kindergarten set, boycotts were threatened.  In a 2014 interview with Yahoo, Burton (presumably while twirling an amulet holding Johnny Depp’s immortal soul) said, quote: “I think I upset McDonald’s. [They asked] ‘What’s that black stuff coming out of the Penguin’s mouth. We can’t sell Happy Meals with that!’ It was a weird reaction to Batman Returns, because half the people thought it was lighter than the first one and half the people thought it was darker. I think the studio just thought it was too weird — they wanted to go with something more child- or family- friendly. In other words, they didn’t want me to do another one.”

Amidst this merchandising nightmare, Burton was scrapped from the third film. Instead, the more kid friendly Joel Schumacher of St. Elmo’s Fire fame was hired. What Schumacher gifted to us was the neon rave vomit that will always be known as the “Schumacher Batmans”. As a ten year old at the time, I LOVED Batman Forever. Laugh if you must (and you will) but I memorized every line of that movie. My favorite shirt was my Batman shirt. I even had the soundtrack. “Kiss From a Rose” is playing in my head right now. Still have no clue what that song is about but if it comes on at the grocery store I extend my arms and howl to the ceiling “Baa-bae! Now that your rose in bloom, the light hits the gloom of the gray!”

So, you say to yourself, Amanda was an idiot child and between her and McDonald’s they ruined Batman for the rest of us much like they ruined hotcakes. The integrity behind one’s favorite shows and movies have little to do with the corporate greed of some toy company. To that I say, where’s your damn Beth Funko Pop?

Yes Beth, from The Walking Dead. Maggie’s younger sister who suddenly became relevant an episode before she died? Before Beth died her main role in life was to hold Judith and sing at awkward times, like that dude at the party who learned the opening chords of “Wonderwall” and wants to show off.  People wrote petitions begging to somehow reverse the effects of a lethal shot to the head. Before her death, and even after, the only Beth toy one could find would be in some mad collector’s basement shipped from North Korea, the cleverly named, “Bath”, to keep away the copyright infringement.  The character of Darryl will most likely outlive the human race with the popularity of his collectible figurines, Funko Pop’s and assorted “I love Darryl” t-shirts.

Once a character dies in a series, they fade from our consciousness. Like Beth and Bob and Shane on The Walking Dead, they become irrelevant. Certainly part of the series’ history but no longer contributing to the ongoing story. So their bobble heads and action figures migrate to the clearance bin at GameStop. The new generation of kids seeing the new Star Wars films, our kids and nieces and nephews are not going to see Luke and Leia and Han as the heroes of the films, heroes they want to pretend to be at recess. They’re gruff parental figures, telling the cool guys what to do. Their heroes are the next generation, Rey and Finn, Poe and BB8. Whether that disappoints you or satisfies you is beside the point, because at the next child’s birthday party you attend, you will be purchasing a Kylo Ren action figure that will end up in the pool filter.

How big of a role do you feel that toys play in your favorite franchise?

Also, did you know, that when it snows, the my eyes become large and the light that you shine can be seen?