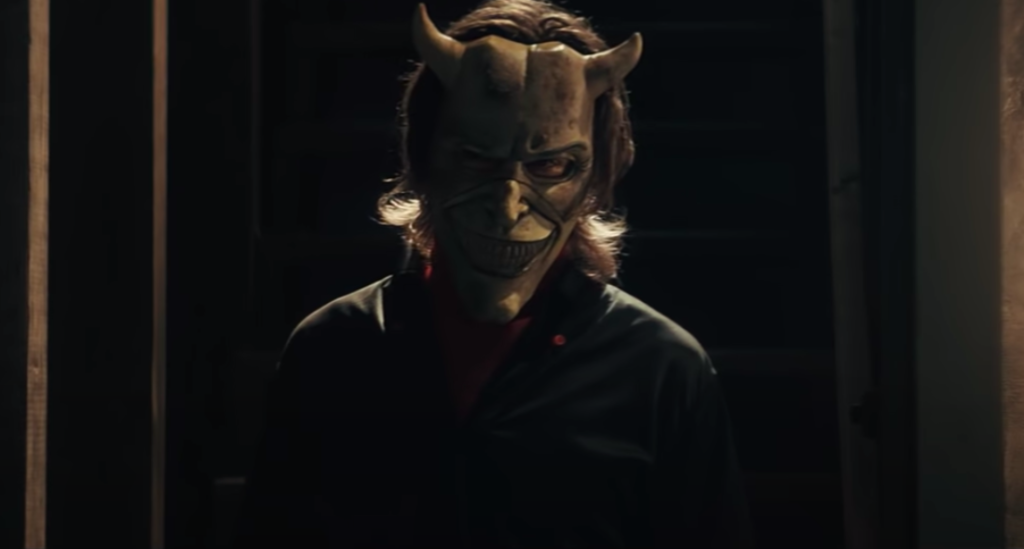 I keep saying I don’t care for horror as genre, and yet time and time again this year has put that bias to the test with some killer outings. “The Black Phone” feels like it’s been ‘coming soon’ for over a decade, having seen trailers for the better part of a full year now. Having finally arrived to high praise from both critics and audiences alike, I admit to being on that hype train.

Small in scale and even smaller in its overall narrative, “The Black Phone” exemplifies taking a rather simple premise and elevating it into a standout thriller. Everything from setting to performances manages to get the most of out the story and remain engaging from start to finish. Though a bit flawed in that you can feel its short story origins being stretched too thin, “The Black Phone” lives up to the hype. Blumhouse Productions continues to make good on their promise of delivery solid horror films on a b-movie budget, and this latest outing is another example of how reliable the studio has become.

Based on a short story of the same name by Joe Hill (a successful writer in his own right but also Stephen King‘s son) and written and directed by Scott Derrickson with C. Robert Cargill (“Doctor Strange“) serving as a co-writer, “The Black Phone” takes place in the Denver suburbs in 1978. A series of missing children abducted by the aptly named “The Grabber” has taken the small town by storm. Siblings Finney and Gwen live with their abusive father who rules their home with the ruthlessness of a belt and alcoholic rages. Things aren’t much better for Finnney at school either, where he is constantly bullied and has only a few friends. After a few kids he knew are abducted, Finney finds himself to be the next victim of The Grabber. Trapped in a sound proof basement and taunted to participate in a game like ritual, Finney soon discovers that he’s not as alone as he thinks. A broken black phone in his empty room begins to ring with the voices of previous victims, who begin offering clues on how to survive. Adding more to the search for Finney is his sister, who’s dreams may or may not be the key to finding her brother.

Knowing now that “The Black Phone” is based on a short story by Stephen King’s son sheds a lot of light on the overall aesthetic of the film. Though taking place in Colorado, the kid centric, suburban setting with a part supernatural part real terror villain feels as if it’s been directly transported from Derry, Maine. Hell, this film could almost be an offshoot of “IT,” with how similar it is to the non inter-dimensional clown aspects of that story. That isn’t necessarily a bad thing, though.

“The Black Phone” thrives when it’s playing it straight instead of digging into the supernatural aspects, tapping into the real horrors of child abduction that was all too familiar for the time the film takes place. It most certainly recalls the sheer unsettling atmosphere of other real life instances, with The Atlanta Child Murders coming to mind. It is here in the fictional conjuring of real life events for the time that it is at its strongest, with the supernatural elements coming secondary to success.

Though the supernatural isn’t as interesting as the actual thriller that’s being told, “The Black Phone” is smart enough to not create an entire mythos surrounding those elements. There’s no real examination of why the phone connects to the dead, why Gwen’s dreams are apparently psychic, or why The Grabber is obsessed with devil masks that change expressions based on his mood. Derrickson seems to recognize a boy fighting for his survival and serial abductor/child murder are far more terrifying than ghost stories. It is a mistake that often plagues similar stories like this, where a desperate attempt to over explain everything removes any and all intrigue into what would otherwise be a solid premise. These pitfall avoidances are a prime example as to why the pairing of Blumhouse and Derrickson is a match made in heaven.

Derrickson was born for films like this, and it actually makes me wish he didn’t end up exiting “Doctor Strange 2.” Not that Sam Raimi‘s vision wasn’t a good alternative, just that “The Black Phone” puts his strengths in plain view and leaves you wondering what he could have done with an MCU follow up.

In addition to solid story telling and stellar directorial execution, “The Black Phone” is further elevated by its cast. Newcomer Mason Thames is the true anchor of the film, as he brings something special to Finney that we rarely see with child actors nowadays. You instantly root for him, and Thames has to essentially carry the bulk of the film on his shoulders and must often do so without lines and predominantly reactionary expressions. Thames nails it, and really becomes the heart and soul of the film in the best of ways.

Likewise, Madeleine McGraw as Gwen is terrific, a girl who is always the smartest person in the room be it children or adults, and actually has some of the funniest moments in the film. Though she’s on the outside trying to find her brother through premonitions, she’s not given as much to do as one would like, but McGraw is good enough to make the most of every minute of screen time she’s given.

And then there’s the often underrated Ethan Hawke as the Grabber, who’s electric energy makes him one hell of a terrifying villain.

Hawke is having a blast here, and even though he spends a majority of the film with his face covered, you can tell he understood the assignment and truly delivers a haunting performance. He is most effective the less we know about him, and Hawke seems to relish in being able to create a monster from his own imagination. I don’t know why we keep doubting him, because it’s incredibly rare that Hawke brings anything less that everything he has to just about every performance. Though he serves as a catalyst for the film, he doesn’t have a significant amount of screen time. But this feels more purposeful than wasteful, as both Derrickson and Hawke understand that “The Black Phone” is about the horrifying experience of the protagonist and not the exposition of the antagonist. it is an effective strategy that pays off, as the film doesn’t waste time chasing subplots and keeps everything focused on the singular story it wants to tell.

As mentioned, the film does feel like a short story being expanded upon, and while many of that leads to its overall success, there is a part of you that can walk away feeling a little underwhelmed. The film is narratively simple, and while the direction and performances deliver, there is a sense of it being a little too bare bones for its own good, having very little to mine from its source material and stretching it beyond what’s available. This is a minor issue though, and easy to look past due to the film’s strengths far outweighing any of its weaknesses.

Overall, “The Black Phone” is an effective horror thriller worth watching, and is another solid outing for Blumhouse. Though i’m sure a less than effective sequel will probably be in the works that ends up committing all of the mistakes this one avoids, this current standalone stands tall above many other horror thrillers this year.

“The Black Phone” is now playing in theaters. You can watch the trailer below.