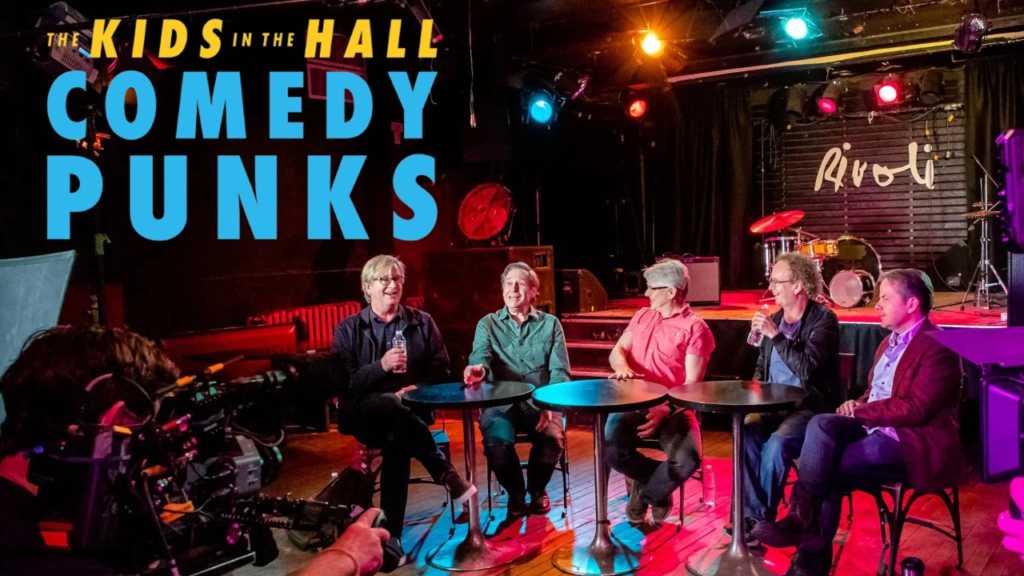 “The Kids in the Hall: Comedy Punks” All Grown Up, Still Funny [Review]

We should probably establish up front that I am not, nor have I ever been a fan of “Kids in the Hall.” Not that I don’t find the actors funny in their own right, or have any kind of aversion to sketch comedy shows. Simply put, I just kind of missed the show in its heyday despite the exact age for who it was made for. And by the time the show was over and done with (at least temporarily), I didn’t see what all the fuss was about.

Now, I’m still not inclined to tackle all the seasons (both old and new) but I will say that “Kids in the Hall: Comedy Punks” is enough to make anyone a fan of the men who created a cultural comedic phenomenon. “Comedy Punks” is wonderfully crafted; vulnerable, honest, and a celebratory examination of the men behind the madness. So well done in fact that you don’t even have to be a fan of their creation to develop immense respect for its creators.

“Comedy Punks” is exactly what you think it is: an exposé on the comedy troupe that created “Kids in the Hall,” the Canadian early 90s sketch show that transformed into a huge, international success and launched many of the individual careers of the comedians, who are all still working today. What really elevates the documentary is that it is told entirely through their own perspectives, both individual talking head recaps of events as well as reuniting them all together often to share their experiences. These are men who have literally grown up both in the spotlight and together, and their camaraderie and brotherhood is expertly demonstrated throughout the film. It’s not unusual to make a documentary about longstanding performers, but “Comedy Punks” feels somehow unique and fresh even when it is following all the rules of its own genre.

From their humble beginnings performing on small stages, to the budding friendships that were created as their little, weird troupe transformed into a cultural tour de force, to their inevitable fallout and reunion, the scope of “Comedy Punks” is both vast and specific. More so than anything, the documentary places their family like bonds at the heart of everything. It rarely travels down the rabbit hole of success or simply being a montage of greatest hits. It is explicitly told through their own words and interpretations, which allows them to cover all of the greatest hits and failures in honest and personal ways. There is real heart and love between these men, and “Comedy Punks” never strays from exploring the incredible weight of meteoric success. These are troubled men who found solace in being funny and silly together, and everything that comes with that allows the film to really dig into the heart of the matter. Namely, what mattered and matters to them.

It is rare that a documentary about a comedy troupe who many may only know in a fringe capacity can immediately become enthralled with the story unfolding. “Comedy Punks” is truly vulnerable, with every member willing to open up about their successes and mistakes, the things that drove them together, apart, and back together again. It is a fascinating journey, and their intelligent and often humorous recounting of their lives ends with a message of hope, love, and comedy. Director Reginald Harkema clearly has a genuine love for his subjects and subject matter, and is more willing that not to let the story take shape how the men who lived it see fit. “Comedy Punks” is the kind of highlight comedic legends like The Kids in the Hall deserve.

“Comedy Punks” has something for everyone. Whether you’re a fan of the series or completely unaware of the cultural impact they represent, “Comedy Punks” is one of the better documentaries out there. These are revolutionary comedians who inspired a generation and continue to influence comedians and generations to this day. Sure, they’re a little less angry, less ‘fight the power through jokes’ and less confrontational, but they are also far more in love with each other and their craft. It truly shows in their experiences and their recounting of their history to where they are now. It is a hopeful and uplifting conclusion to a surprisingly tumultuous journey of laughter and creation.

The journey examined in “Kids in the Hall: Comedy Punks” is one everyone should tune in for, regardless of your previous knowledge or enthusiasm for the long standing comedy troupe. Unrelated and not really focused on in the documentary, but why did I want to immediately watch “Sky High” afterwards?

Anyway, I SQUISH YOUR HEAD!

“Kids in the Hall: Comedy Punks” begins streaming on Amazon Prime May 20th. You can watch the trailer below.