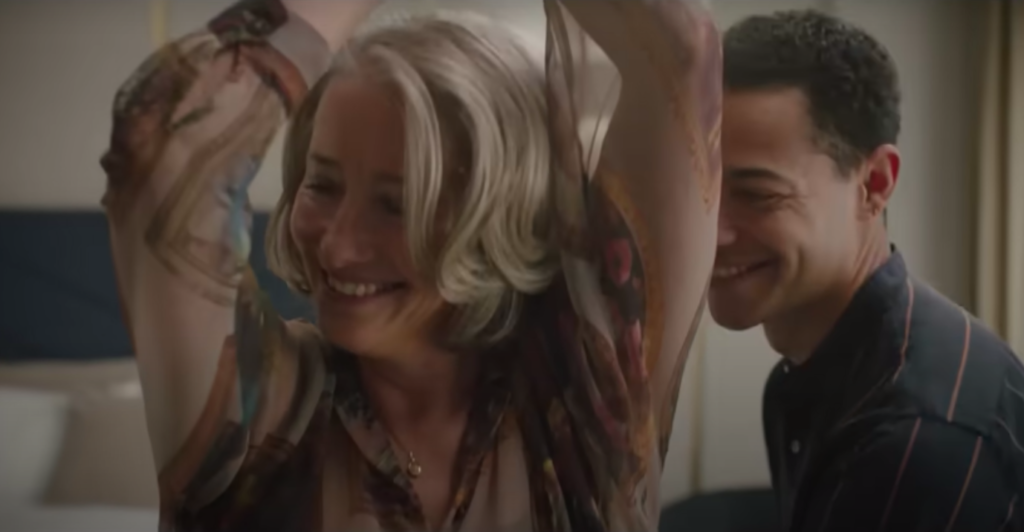 Emma Thompson Bares it All in “Good Luck to You Leo, Grande” [Review]

Every time I think we’re done bringing up how impactful and strange it is that Hulu is the wild wild west for Disney-owned properties, Searchlight goes and acquires the rights to something like “Good Luck to You, Leo Grande.” I don’t think I will ever get over the fact that Disney continues to release extremely adult content films on any service. Disbelief aside, I am infinitely grateful for this weird world we live in, because it means more people get to see this incredibly well made, quiet film. Trust me when I tell you, this is the most you’ve ever seen from Emma Thompson, and I mean that both emotionally and physically. “Good Luck to You, Leo Grande” is a small, introspective, and often times a very funny look at sex without being sexually exploitative, something I didn’t know was missing until now.

Directed by Sophie Hyde and written by Katy Brand, “Leo Grande” tells the story of retired widow Nancy Stokes, who after a life of mediocrity and boredom, hires an attractive young sex worker to help her explore and live out her sexual fantasies she feels she missed out on throughout her life. Stokes is pragmatic, unadventurous and unsure of herself and her life, so while she continually says she wants to indulge these fantasies, she is constantly going back on the agreement decided on with Leo Grande. Grande is young, attractive and self confident; he has spent years creating his persona to satisfy his customers. As their worlds begin to collide, the facades of both individuals begin to shed as each one learns more and more about each other and their life choices, all while developing new understandings of both each other and themselves.

On paper, this reads like a trashy romance novel your mom doesn’t want you to know she owns. But powered by incredible performances from Thompson and Daryl McCormack while paired with an exceptionally sympathetic and purposeful script, “Leo Grande” is elevated from its strange premise into an endearing exploration of self discovery and sexual normalcy.

The line between sexually graphic exploitation and sexual commentary is almost non-existent, yet somehow “Leo Grande” manages to ride that line with expert balance, never tipping into trashy Skinemax softcore nor falling over into the trappings of self importance. The small scale, “two people talking about sex in a hotel room” setting that dominates a majority of the film allows these difficult balancing acts to take place with expert precision, and allows the film to thrive with intimacy, both in its subject matter and setting.

“Good Luck to You, Leo Grande” sets out to truly explore the masks we wear, both when it comes to our own desires and personal relationships as well as how we think about sex. I can’t stress enough how refreshing it is to watch a film about sex that never once feels sexually exploitative for either person involved. The film goes out of its way to demonstrate Stokes’ own misunderstands of sexuality while also reframing how we think about sex workers.

McCormack and Thompson are absolutely charming and endearing, which is crucial since pretty much the entire film takes place in an empty hotel room with only each other as company. “Leo Grande” simply doesn’t work without or the oozing chemistry of McCormack and Thompson, nor do is land as well as it does if both actors are not completely dialed into the story and their characters. Thankfully for us, both of them are absolutely wonderful. The mismatched pairing works brilliantly, and you can’t help but love both Stokes and Grande for every reason you should and every reason they are trying to hide from each other and themselves.

What becomes more and more apparent as both parties work on developing their relationship (paid or unpaid in this case) is the facade and misunderstandings in how each party approaches the relationship. Thompson is willfully ignorant of her own situations. She wants one thing but can’t get over the stigma of the very things she’s trying to set in motion. McCormack is self assured and confident, but in moments of vulnerability demonstrates that Leo Grande is in fact a character created for his work, and not actually a reflection of who he is. The film is a character study of two different worlds colliding through sexual interactions, and the brilliant work of the actors paired with the minimalist vision of Hyde and witty, introspective script from Brand is a match made in heaven.

“Good Luck to You, Leo Grande” is infinitely better than it ever should be. It is heartfelt, funny, and introspective, allowing both actors to being completely vulnerable about things we often pretend aren’t a part of our very nature and desires while never disparaging either chosen yet opposing lifestyles. And underneath all of the sexuality, there is a true sense of connection and relationship, with Thompson and McCormack brilliantly demonstrating how misconceptions and perceptions of things we don’t understand hinder us from being truly at peace with who we are and the life we’ve lived.

There is a true charm here, as both Thompson and McCormack bring endearment and humor to an otherwise taboo subject matter. Like the script which is acutely aware of its own themes and purpose, both of the film’s leads not only understand the assignment, but transcend the off putting premise to create something truly special. Both display incredible chemistry despite a majority of the film being spent with them at odds; Nancy not entirely sure she wants what she’s asking for or even what she’s asking for in the first place, with Grande doing everything he can to keep up the facade of his character to satisfy his client. “Leo Grande” is intentionally uncomfortable at times, but both actors are so in tune with their respective roles that they sort ease you into everything even as those things often escalate in unexpected ways. It is incredibly engaging despite is minimalist framework, and the self discoveries and messages of self love and sexual confidence feels organic and meaningful.

I really do understand how at first glance, there is no way in hell this is a film you think you want to watch. If all you did was read the synopsis on IMDB, your aversions to it wouldn’t be unfounded. But I would argue that, much like Nancy herself, get out of your comfort zone and try something new. It is not nearly as sexually explicit as it sounds, and as I said before, brilliantly balances its subject matter which its purpose. There is a real heart underneath all the conversations about the unmentionables and sexual acts, and in a world that seems dead set on reverting back to the 1950s, “Leo Grande” somehow manages to become a more important viewing that ever.

Not to be one for spoilers, but “Good Luck to You, Leo Grande” does sport some full frontal nudity from Thompson. No one prepared me for “About Schmitdt” with Kathy Bates, so I feel it’s only fair to prepare for you Thompson. I want to be very clear, though. Thompson’s physical vulnerability should praised and herald as a true accomplishment of embodying a role, and the way in which is presented is meant to affirm the true self awareness of being comfortable in our own skin. Something I think we all struggle with this more than we are willing to admit, and I swear to god I will go after anyone who goes after Thompson for her incredible bravery and dedication to her craft and character here. “Leo Grande” brilliantly presents this as a self love depiction rather than a typical mocking, body shaming antic, and I hope and pray that no one sees it any differently.

I mean it, I will come for you if come for Thompson on this one. I literally write for a living, and will eviscerate anyone who attempts to body shame her for doing what many of us wouldn’t even be willing to do 50% of the time at the beach on a Sunday afternoon.

Anyway, “Good Luck to You, Leo Grande” is a terrific, unique film about sex, sexuality, self discovery and human connection and you should absolutely check it out.

“Good Luck To You, Leo Grande” will be on streaming on Hulu June 17th. You can watch the trailer below.