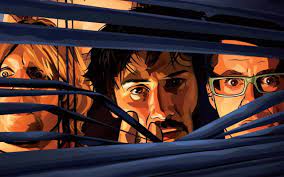 Nerdbot Recommends: 5 Under the Radar Movies You Haven’t Seen

With a new streaming service popping up seemingly everyday, and an all out assault of content, it can be difficult to find the time or interest to see everything you want to watch. As someone has to seek out content for a living, it is a very, very daunting task that often times has more films than time in a day to watch and review. With movies being more accessible than ever, the sea of cinema can often sweep some strong titles under the rug, never to be seen by anyone other than hardcore cinephiles.

Luckily for you (and me I guess), I spent my pre-streaming digital age days collecting DVDs, and have quite the book(s) of films you may not have heard of in my trusty carriers. Say what you will about the old school way of collecting films, but I’m pretty sure most of the films on the list are hard to find in most places where films are readily available. So let’s take a look at 5 of my favorite films you haven’t seen that I recommend you track down.

Of course, we have to do a disclaimer because people only like to read the headline, a movie title then come after me in the comments about how they’ve seen every single movie I recommend. Not to get too combative, but I don’t know you. You could very well have seen every single film on the list. Hell, you may even own them all yourself. So I’m not talking about you. These are merely films that aren’t often talked about and general audiences probably haven’t seen. Let’s not get hung up on semantics. Just enjoy the list, recognize the movies you have seen and/or make notes of the ones you haven’t seen that sound interesting.

Ok, let’s get into it! Here are 5 films you may not have seen that I recommend.

1 “Before the Devil Knows You’re Dead “

This is one of those star studded cast movies no one really knows existed. “Before the Devil Knows You’re Dead” stars Phillip Seymour Hoffman, Marissa Tomei, Ethan Hawke, Amy Ryan and Michael Shannon, among other notable names. Bet ya didn’t know this many high profile stars were in one movie, huh? It’s a non-linear film which was a big narrative device in the mid to late 2000s, and tells the story of two down on their luck brothers who plan to solve their problems by robbing their parents jewelry store. The plan is to do so with a toy gun and with minimal resistance, but everything goes awry very quickly and the brothers are left with less than when they started and surrounded by even more tragedy. The film is brilliantly crafted and powerfully acted, and serves a reminder to how missed Hoffman still is and how versatile and captivating Hawke can be. It is also the last film from Sidney Lumet, who sadly passed in 2011. It’s a wonderful kind of depressing film that I highly recommend to check out.

“Before the Devil Knows You’re Dead” is currently streaming on STARZ.

Paul Dano has always been a sort of manic, odd ball type actor, but he brings something truly special to his turn here in “Ruby Sparks.” Dano plays a novelist who’s fictional romantic interest Ruby Sparks magically comes to life. He soon realizes that whatever he writes, Sparks becomes. This leads to deeper questions about what we truly want out of relationships, and how idealizing the perfect partner or person can lead to unknown dangers and disappointments. It also stars Zoey Kazan as Ruby Sparks (who also wrote the film), Annette Benning, Antonio Banderas, Steve Coogan, and Chris Messina. It’s a beautiful romcom/drama, one that I think about quite often and really wish more people have watched.

It’s not all festival and Oscar bait films on here, you guys. “Chocolate” is one of my favorite martial arts films, sporting a unique device to frame it’s inclusion of numerous fighting styles while also dealing with mental illness and autism. It’s the feature film debut for Yanin “Jeeja” Vismitananda, a thai martial artist who was discovered in 2003. The film tells the story of a young girl Zen who is autistic and can mimic anything she sees. Her mother is a lover of a Yakuza boss, and is cut off from ever seeing her lover ever again. After she becomes diagnosed with cancer, Zen decides to help raise money for treatment by taking on difficult jobs that require her unique set of skills. Of course, that takes her to the top of the underworld, and she’ll have to fight for her life to survive. It has some incredible fight scenes and Jeeja is a terrific, believable leading lady as a bad ass martial artists. Also, the DVD has a blooper real that shows the horrible mishaps and injuries that occurred during filming. They make Jackie Chan outtakes look like child’s play. It’s on Amazon Prime right now if you wanna check it out.

This is weird film, and I’m not even sure “The Ten” is a good one. But it’s certainly a star studded funny one, and is one of those odd ball vignette comedy films that rarely succeeds in what it’s trying to do. With the bar of the genre set low, “The Ten” stands out high above the rest. Packed with notable actors doing ridiculous things like buying CAT Scan Machines, having sex with Jesus Christ on vacation (yes, really), and having naked man Sunday parties while listening to Roberta Flack. Each vignette is a sort of parody take on one of the ten commandments, and are linked together by Paul Rudd as a narrator connected to each story somehow. Literally everyone is in this movie, and they’re all doing things you probably didn’t think they should be doing. But unlike “Movie 43,” everyone knew they were in this movie and they all lean into it in a way that makes it funnier than it should be.

“The Ten” is currently available to buy/rent on Vudu.

If you’ve ever wanted a reason to take an edible and watch movies, “A Scanner Darkly” should be your go to. Written and directed by Ricard Linklater (“Boyhood,” “Apollo 10 1/2 A Space Age Childhood“) it is an adult animated sci fi psychological thriller that serves as an adaption of the 1977 Phillip K. Dick novel of the same name. It stars Keanu Reeves, Woody Harrelson, Robert Downey Jr, and Winona Ryder, and is one helluva ride whether you’re sober or not. It’s hard to really get into the plot itself, but the film tackles themes like addiction, government surveillance, and shady police tactics. It’s a manic, wild film that takes a minute (or many) to really get used to, and the strange unique animation really requires some adjustment. But the film is really well acted and well paced, and worth tracking down and checking out.

“A Scanner Darkly” is currently available to buy/rent on Amazon Prime.