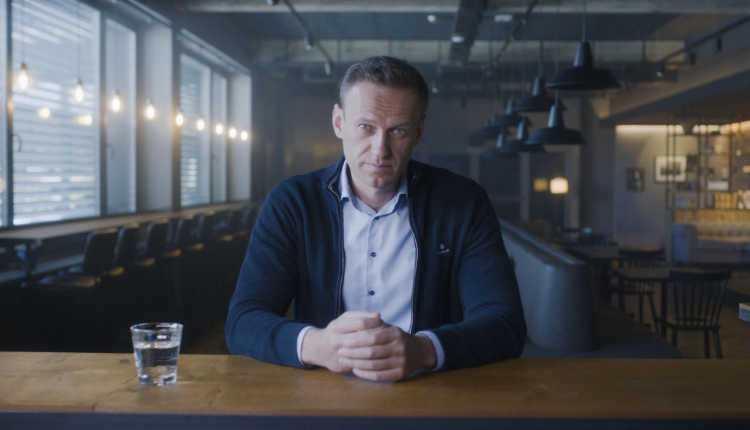 Given the current state of the world, it seems somewhat of a crime for a film like “Navalny” not to be rushed to the forefront of releases. As I’m sure you’re all aware of my fascination with true crime, there is simply nothing quite like this gripping and unrelenting documentary about a failed assassination attempt and a politician set on finding his would be killers. Adding even more fuel to the fire, all of these events are not only true and happen in real time, but they are firmly planted in Russian politics and Putin’s power plays. All of which are deeply and hauntingly relevant to the current invasion of Ukraine. “Navalny” doesn’t get into all of that, as it takes place long before Putin decided to flirt with the idea of WWIII, but it remains one of the most relevant and captivating pieces of cinema I’ve seen in a very long time.

The hype is very real, and anything you’ve heard or read about the triumph and mastery of “Navalny” is unequivocally true. It is without a doubt one of the most gripping, thrilling, intense documentaries I’ve seen in a very long time, and deserves all of the praise and acclaim it has received ahead of its release and Sundance Film Festival chatter.

For those unfamiliar with the premise, Alexi Navalny is a Russian opposition leader who managed to gain a strong following by using social media and campaigned hard against Putin in 2020. In August of that year, he was hospitalized due to an unknown ailment on a flight in Russia, then released two days later to Germany for treatment and recovery. It was soon discovered that he was in fact poisoned, and the nerve agent used was specific to the Kremlin as a common means of dispatching opposition. He miraculously survived, and upon regaining his faculties, sets out to find the what, where, who and why for his attempted murder.

Everything about “Navalny” reads like a true crime book you’d pick up at an airport terminal. The story reads like a Jack Ryan novel; international conspiracy, assassination attempt, global politics in a totalitarian government, and a bold faced cover up to the public. It is incredibly difficult to relate just how much of the common fiction tropes we read and watch exist in this very real life story. Director Daniel Roher is absolutely fearless in his pursuit of the truth, and unbelievably lets the left for dead man himself uncover his own assassination attempt in real time. I have never in my life watched a man who should be dead at the hands of a current political leader track down his own killers and uncover the spiderweb of lies at the same time we are. It is truly masterful, and Roher is unafraid to explore every single aspect of this complex and unbelievable story.

For the sake of not giving anything away, I will tailor my excitement to describe “Navalny” to you and highlight a few things that set this documentary apart. You know, aside from literally everything. The first thing that is intriguing outside of the films primary subject matter is the introduction of Chriso Grozev, a Bulgarian investigative journalist with a propensity for black market information. The ease with which Grozev is able to uncover and acquire the kind of data only something like the CIA or the Metaverse would be able to access is quite literally a documentary on its own, and he plays an integral part in discovering what actually happened to Alexi Navalny. Grozev is a testament to how good “Navalny” is – he is quite literally the guy in the chair, hacking things the way it only exists Hollywood fodder but doing it for real and with ease. Case in point: everything everywhere is available for a price and nothing, absolutely nothing in this world doesn’t come with a price tag.

What also sets “Navalny” apart is how well and complete and Roher chooses to frame his primary subject. While you’re rooting for Navalny every step of the way, Roher is quick to point out that he is a flawed man with some not so wholesome political views. He may be the hero of his own story, but the film is unafraid to point out that he is not a Jesus figure. he is, for all intents and purposes the lesser of two evils when compared to someone like Putin. This is brilliant filmmaking, because it allows viewers to really grasp the complexities of the unrest in Russia and what it really means to be an opposition leader in a country that makes those very same people disappear. Allowing us to see Alexi as he is, flaws and all actually makes the film even MORE compelling and gripping. He isn’t a man painted in a saintly light; he’s a complicated man who has experienced an out of this world trauma.

Lastly (and perhaps most surprising), “Navalny” is strangely a beautiful love story. Alexi may be many things and not all of them great, but he is without a doubt a man who loves his country and has an unwavering wife in his corner. The documentary proves that behind every man, great or not, there is a woman standing behind him pushing him. “Navalny” is no different, with his wife Yulia Navalnaya serving as the rock and immovable force being everything. She is the reason he was extradited to Germany when it was clear that the Russian hospital had no intention of releasing him. She’s the reason he was able to recover during his time in exile, and driving force behind his ill advised return to Russia after his tremendous ordeal. She is the rock, and the unsung hero of story that should be a Netflix series with all its complexities, twists, turns and revelations.

I don’t think I can harp enough praise of “Navalny.” It is quite possibly of the best documentaries I’ve ever seen. Beautifully crafted, expertly paced, and packed with so many nuances and out of this world characters it’s hard to even fathom that all of this is 100% real. What’s more is that most of it is happening in real time. This is a man who is investigating his own attempted murder, and we are privy to watching him uncover everything simultaneously. There is a point in the film where a phone call happens, and it is hands down one of the most intense and compelling scenes I have every seen on film. I’m not kidding, either. Hollywood literally can’t do a better job fictionalizing these very real events as we watch them unfold. It is simply stunning, unbelievable, and even harder to come to terms with the fact that everything you are watching is actually happening.

“Navalny” is set to be released on HBO Max sometime this year. While I won’t tell anyone to subscribe to a streaming service for a single piece of cinema, it is worth the price of admission. You do NOT want to miss this one. Documentaries like this don’t come around very often, and if anything has ever been worth shelling out a few dollars a month to watch, it’s “Navalny.”

There is no official trailer yet, but the film is set to release on HBO Max sometime in 2022, and CNN after that.