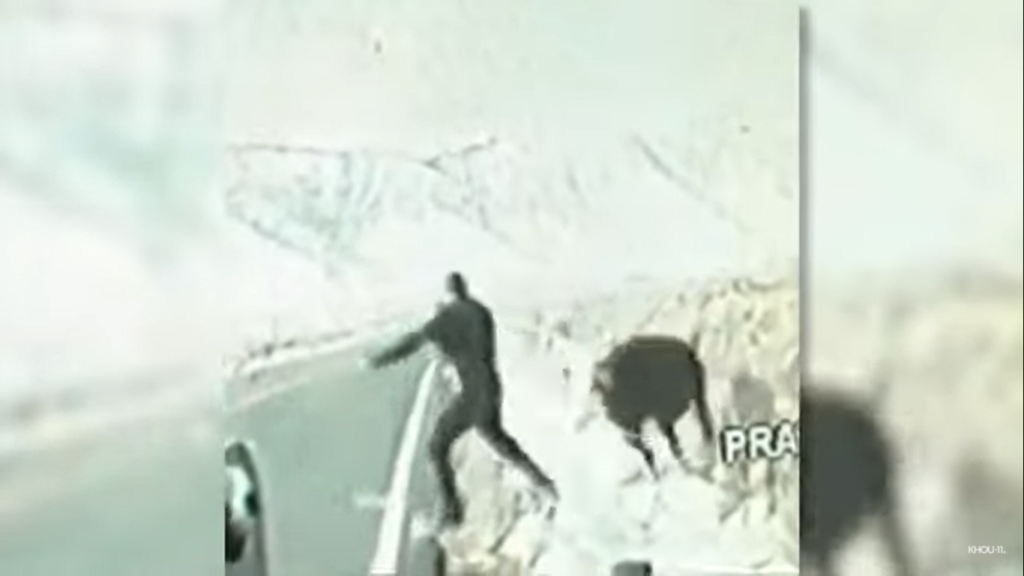 Depending upon where you live, sometimes your job may entail things that another person in the same position, somewhere else in the world, would have nothing to do with. Many of us who grow up in rural areas probably contended with the annoyance of getting stuck behind a tractor going down the road, or the serious threat of deer crossing a roadway. For the California Highway Patrol (CHP) in the northern region of the state, sometimes they have to deal with farm animals. And sometimes, very large ones with horns.

On December 23rd, the Susanville branch of the CHP released a video to their official Facebook page of Officer Pratt having to deal with an escaped bull that was roaming around the road. Given that bulls can weigh anywhere from 1,000 to 2,000 pounds, that’s a lot of animal to be charging into a car, or a person for that matter.

Given that people are injured and killed by bulls in pretty horrific fashion at times, it’s important for these animals to be where they need to be and away from the public.

From the video, we can see how quickly the bull closes in on the officer quickly. Additionally, it has its head down and horns in position to potentially gore whatever it runs into. Luckily the officer seems to avoid the brunt of the attack. The dash cam footage that recorded the incident isn’t the greatest quality, so its hard to see how much contact the bull made, if any. Considering the lawman was able to walk away from the incident though, he’s incredibly lucky.

Considering that no one was hurt, here’s the fun part where I get to go through a bunch of puns related to this incident and see if my editors let it stay in the article. So if you’re reading this, then brace yourself:

It’s good that Officer Pratt was able to steer himself out of danger by staying calm and not having a cow. He really had to hoof it out of there before the situation got gore-y. When your life is at steak like that, you have to take the situation by the horns and avoid an abomina-bull end. Anyway, I don’t want to milk this incident for more than its worth, so perhaps its time to put this story out to pasture and moo-ve on.

[Editor’s note: we feel we should also remind readers that our friends on “MythBusters” were able to disprove the old adage of a bull in a china shop. The creature is fleet of foot, and almost elegantly evades the shelves of fragile things.]