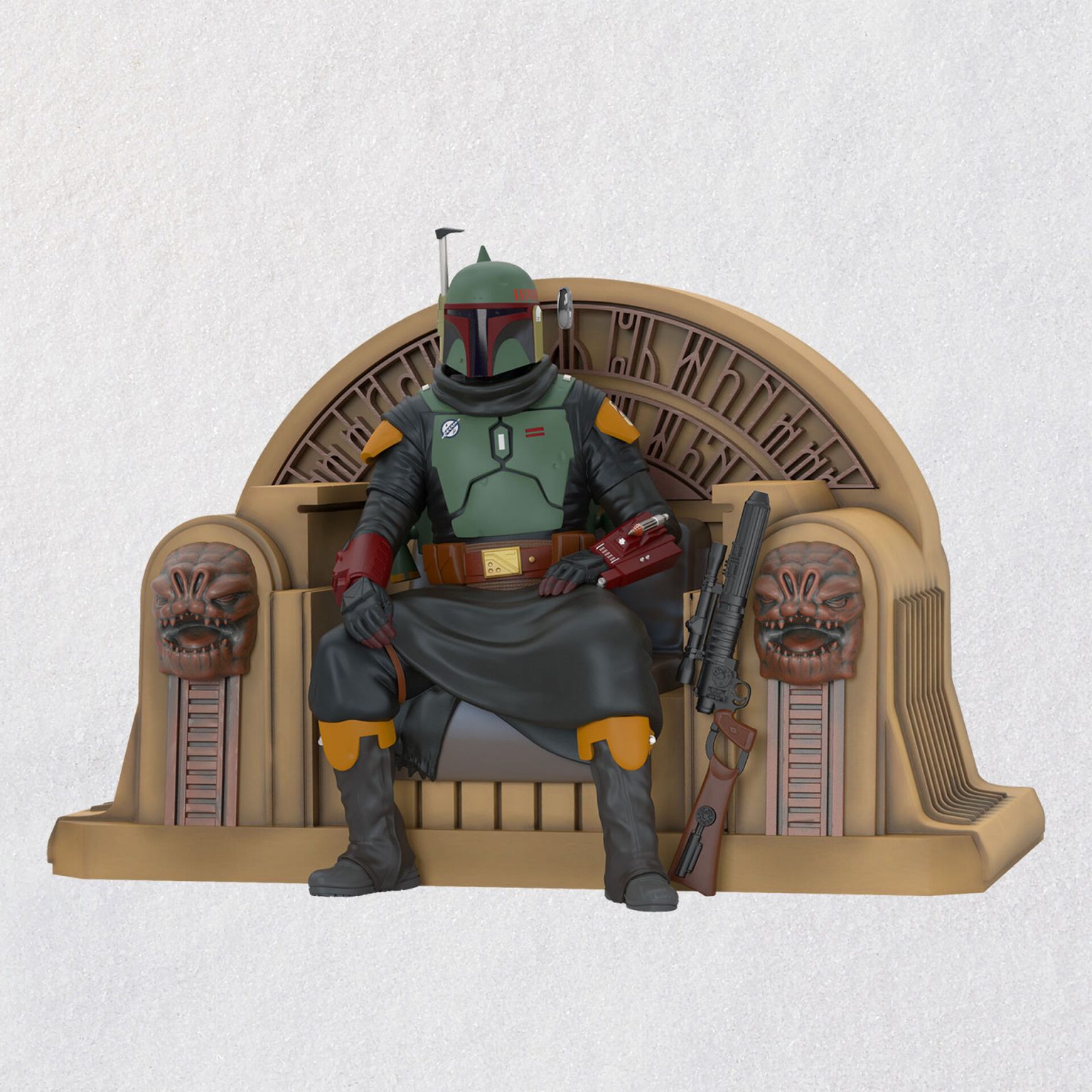 We know November just kicked off, but that means it’s the PERFECT time to start shopping for holiday ornaments. And what better place to look than Hallmark? We have to say, there are some pretty great offerings this year. Especially if you decorate your tree with a nerdy flair.

As you’ll recall, at the end of season 2 of “The Mandalorian,” we see notorious bounty hunter Boba Fett in a new place of honor- the throne in Jabba the Hutt’s palace on Tatooine! We’ll be seeing Fett in his solo series next month, “The Book of Boba Fett.“

A self-proclaimed “simple man making his way through the galaxy” (like his father before him), Boba Fett endures as one of the most infamous bounty hunters in “Star Wars” lore. After falling into the belly of the Sarlacc, his reappearance in season 2 of “The Mandalorian” thrilled fans—even more so as he returned to Jabba the Hutt’s palace on Tatooine and usurped the throne held by Bib Fortuna. This Christmas tree ornament depicts that triumphant moment, which teased the upcoming arrival of “The Book of Boba Fett.”

Blanche from “The Golden Girls“

One of our favorite sitcoms, “The Golden Girls” makes their way to your Christmas tree with this figure of Blanche, played by Rue McClanahan.

Share the laughs this holiday season with a little help from Blanche Devereaux, the sultry southern socialite who shares her Miami home (and plenty of cheesecake) with Rose, Dorothy and Sophia in “The Golden Girls.” This Christmas tree ornament features Blanche wearing her striking red wedding dress and plays audio clips of some of her hilarious lines from the popular TV sitcom (battery-operated).

Pick her up here.

Considered one of the most powerful Disney villains, the dark and sinister Chernabog first reared its wicked head in the classic 1940 film “Fantasia.” Pay tribute to good versus evil with this striking likeness of the menacing character ferociously emerging from Bald Mountain with his giant wings extended. Insert the bulb of a standard miniature light string through the rubber grommet on the ornament to create a special lighting effect.

Some other notable ornaments this year include Marvel Studios’ Falcon, Michael Scott from “The Office,” a new Mirror Mirror Captain Kirk from “Star Trek: The Original Series,” and Mini-Pufts from “Ghostbusters: Afterlife.”

Also, we wanna bring your attention to this “Wizard of Oz” ornament. WE THINK looks like the Wicked Witch is proposing to Dorothy?!