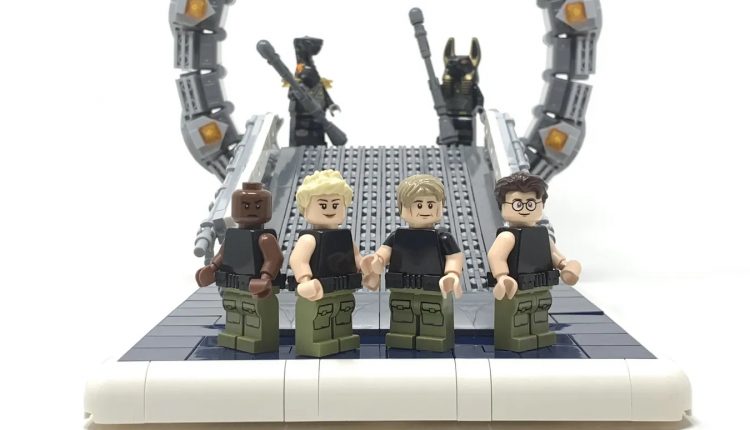 The simplicity of LEGO have lent themselves to a treasure trove of creativity from fans and artists across the world. Aptly named ‘The System,’ the basic block design opens up a whole world of LEGO Ideas, be them original creations or film and tv replicas. On the official website, fans can upload their creations and collections to share with other builders and creators. Recently, someone has recreated the Stargate, equipped with the portal, control room, and inter-dimensional gate on either side of the mysterious water-like portal. Equipped with a briefing room, gate room, control room, off world site and of course, everyone’s favorite show characters in miniature lego form. It’s a merely a fraction of the vast amount of creativity and time that can be found on the site.

The “Stargate-SG1” project design and set pieces aren’t 100% show accurate, but it’s close enough marvel at the compromise. What’s truly fascinating is this whole design is not something that is offered by Lego themselves. Someone has created this from scratch, be it bits and pieces from other, smaller lego sets or simply their imaginative work. Users on the site submit their ideas and/or creations and then get ranked by subscribers/comments on the project. If the project or idea gets chosen by lego, the user can get an offer for an official lego build. Fans across the world put their skills to the test and submit hundreds of incredible ideas to LEGO. It’s quite the rabbit hole to go down if you check out the submissions, and is a true testament to just how versatile and unique the entirety of the Lego world is.

People have submitted all kinds of thing to the site, including “Seinfeld,” the house from “Luca,” 123 Sesame Street, the “Gremlins” house, and even a moving Pac-Man display. The creativity is truly incredible, and one can get lost in seeing all of the amazing project submissions. There seems to be an endless combination of recreations that can be done with Legos, and it’s pretty neat to be able to see the work from some of the best builders in the world in one place. The ideas and submissions are truly endless and is not just limited to film and TV. There’s The Great Coral Reef, a typewriter, a Clockwork Solar System, and even an adorable LEGO Koala with a little baby on its back.

The possibilities are truly endless, and I highly recommend taking a second to get lost in the amount of stunning submissions to LEGO. There is truly a design for everyone, and its worth marveling at just how much you can do with a simple brick.

You can vote for “Starge SG-1” on LEGO Ideas here.