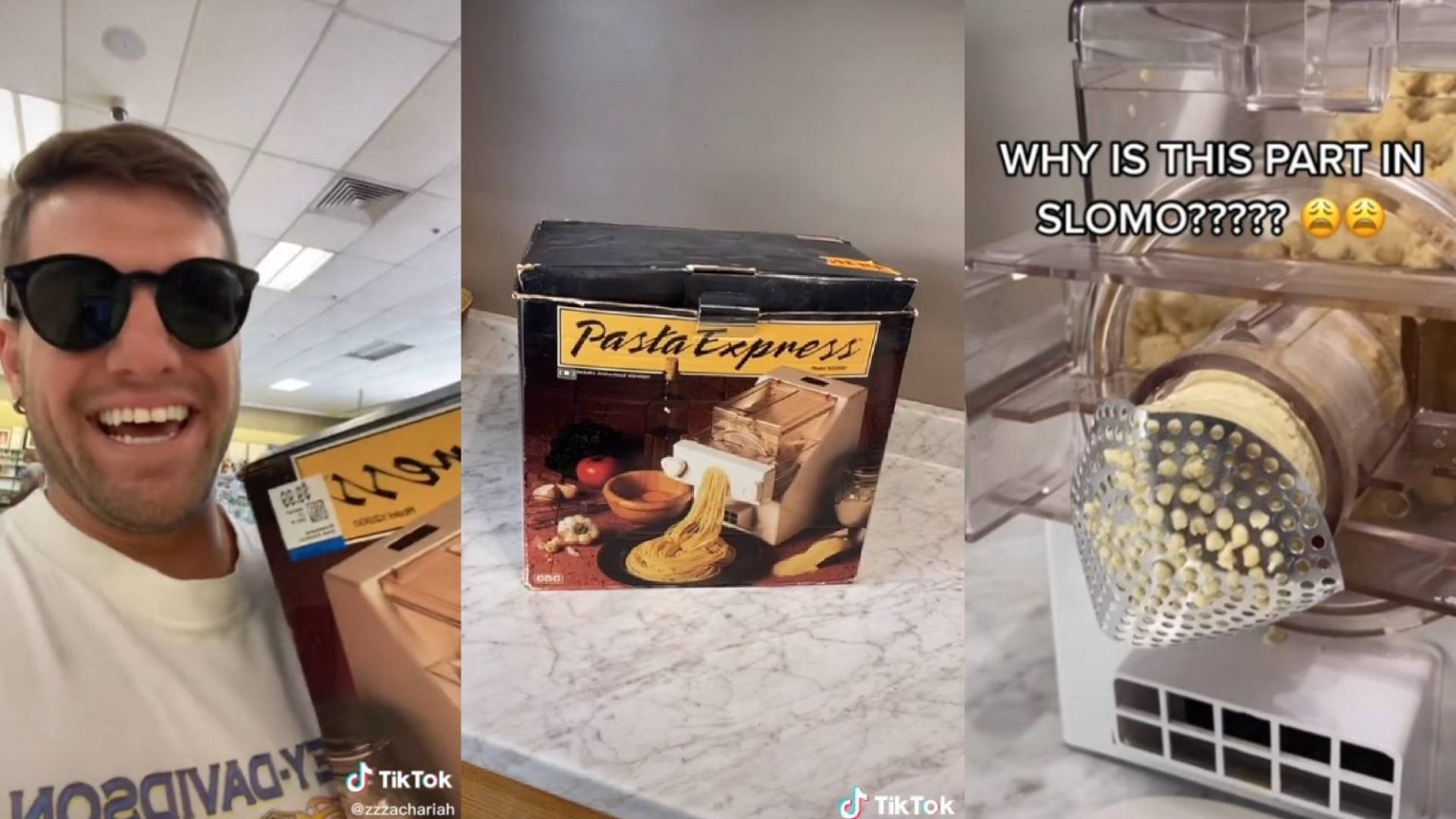 Popular TikTok user zzzachariah uploaded a video over the weekend that has quickly amassed close to nine million views. The contents of it are some of the more comical set of circumstances we’ve come across in a while here at Nerdbot, especially considering how seemingly mundane the subject is. What follows is an almost “National Lampoon’s: Vacation” series of events that lead to comical disappointment.

In an unnamed thrift shop, Zachariah comes across a dusty box on a shelf. Inside of it is the Pasta Express 2000. As it turns out, it only costs $10.00, to which our plucky protagonist is elated to find out. Seeing that the contents of the box contain the original Styrofoam, he’s hopeful that he’s got himself a bargain on his hands.

Elation turns to concern though as he quickly discovers three things while further investigation of the contents. One of them is that the pasta maker comes with an instructional VHS tape. The second is that the copyright date on the tape is from 1990. The third is that the picture of the Pasta Express 2000 that’s featured on the cover of the tape, indicates that they should be some kind of apparatus that goes on the front of the machine to shape the pasta into a noodle form. That apparatus, otherwise known as a die, is nowhere to be found in the box.

With nothing else to do, a full day ahead of him, and a determination to make things work, Zachariah has an idea that brings him to Lowe’s. It’s there where he picks up a shower drain and things only go downhill from there. I mean, it seems like a good idea right? A metal shower drain should be sturdy enough with well-defined holes that could form dough into a spaghetti like shape.

This is what happens when you get your hopes up…

Once Zachariah returns home he turns the Pasta Express 2000 on but quickly finds out that was a mistake. The previous owner had left the specialized plastic measuring cup inside. So the mechanized kneaders broke the cup, cracking it along the side and tearing off a chunk of it. He “fixes” this with scotch tape and a bandage.

After washing the parts, the aspiring pasta chef finds a copy of the instructional videotape online. We’re treated to a snippet of audio, complete with cheesy music. The narrator of the video promises us we’re about to have “the pasta experience of a lifetime”. Apparently this promise was made with the assumption that we’re going to have all the parts to the machine.

Zachariah, lacking the die, decides to take a portion of the shower drain and duct tape it around the pasta exit chute. As a side-effect of this, he can no longer place the bar across the front of the machine that would normally screw on to keep the pasta shaper in place. He’s hoping that the duct tape would compensate for this; it doesn’t.

Unfortunately the shower drain and duct tape assembly doesn’t hold in place. It’s not strong enough to allow the pasta to exit it. Zachariah also notes though that his pasta dough doesn’t look quite like it should in the video. Even holding the drain in place does nothing to help the situation. What’s worse is now the TikTok video itself has seemingly shifted into slow-motion for no explicable reason.

The end result? The dough is taken out of the mixer, flattened onto a cutting board, cut up with a pizza cutter, boiled, put on a plate with sauce, and self-served. How does it taste? Well, to quote the cook turned diner; “like clay.”

Everything you never needed to know about the Pasta Express 2000

Now, a normal writer might just summarize what happened in this TikTok and end things there. But I, as my loved ones and friends have frequently pointed out to me, am not normal. So let’s cut to the exciting part about my investigative journey. I came to the conclusion that Zachariah here could’ve actually had his fingers cut off by this machine.

I wanted to find out how things went wrong in the pasta making process. Other than the obvious missing parts problems, broken measuring cup, and use of duct tape. So I decided to find the same video that Zachariah did on YouTube for the Pasta Express. I’ve included the link to it below.

It’s actually a pretty informative video with bits of self-referential and meta-humor. At one point in time the narrator points out that they’ve opted for cheap stock music to cut down on licensing costs, and jokes that the woman featured in the video, Mary, has a hobby of pointing at pasta machine parts. It’s evident from the video that there are a great deal of parts included in it that Zachariah was missing, particularly, all of the “dies” as they’re called, that shape the pasta.

The video also shows how the plate at the front of the machine has to be secure in order to have the pasta come through it cleanly. Additionally, the plastic dies have to be warmed in water to allow the dough to come through it in easier fashion. The duct tape and shower drain clearly was not a good solution to this…which is partially why this is so hilarious.

Here’s the part that’s not so funny though. The instructions note that the lid of the machine has a built-in safety feature so that if the lid is lifted up, the pasta maker will shut off. Zachariah even notes this as a reason why the machine stops working at one point because the lid wouldn’t fully shut.

There was a reason for the machine turning off when the lid popped off..

As it turns out, this wasn’t always the case. While I was trying to search out information about the company that made this machine, Creative Technologies Corp. (CTC) I came across an archived article from the United States Consumer Product Safety Commission. A voluntary recall was issued for CTC products including the Takka Pasta and Dough model X1000, and the Pasta Express models X2000, X3000, and X4000. According to the CSPC, any model number up to 78209 had a risk of the lid safety shut-off not working. This resulted in 11 incidents where people’s hands got caught in the pasta makers twisting dough kneader. Of those 11 reports, nine of them resulted in injuries including cut, crushed, and severed fingers.

The article also states that these machines were originally offered from 1989 to 1992, retailed anywhere between $90 – $200, and were sold in mail order catalogs and warehouse clubs. There’s also a phone number listed that you can contact for the replacement lid. I decided to give them a call to see if they’d be able to offer some perspective on this problem that gripped the nation at the cusp of the ’90s. Unfortunately, the number led me to Ace Janitorial Escalator Cleaning.

Further research brought me to the website Stock Smart Pro where it’s indicated that in 1995 the company was suffering stock losses thanks to a reduction in sales and retail demand for pasta makers. I guess the magic could only last so long.

At the time of this writing I managed to find a model on eBay in the safe serial number range selling for $99.99 and seemingly containing all the parts. Is now the time to invest in the pasta making experience of a lifetime?

I think I’ll just take my chances at Olive Garden instead.