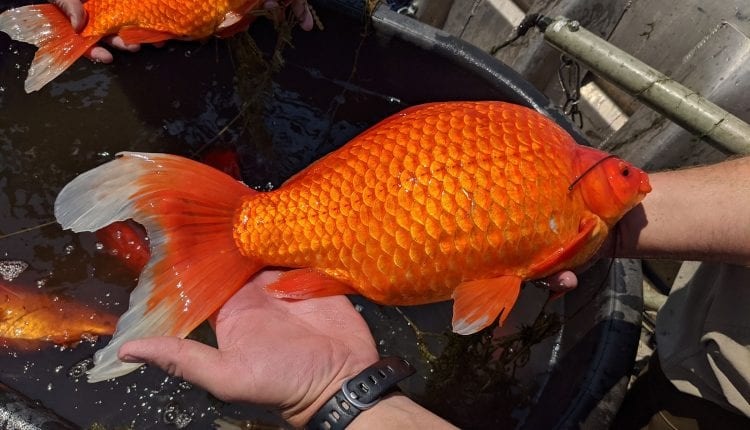 In 1980, a film called “Alligator” was released. In said film, a young girl buys a baby alligator only for her jerk of a father to end up flushing it down the toilet. As it so happens, the alligator winds up in the sewers and eats the disposed carcasses of other animals that were being experimented on with a growth serum. The alligator in turn grows to a monstrous, 30 plus feet in size and eventually emerges from the sewer to wreak havoc on a city. Now imagine this happening with goldfish, minus the growth serum.

Okay, so perhaps that’s a littler hyperbolic but believe it or not, discarded goldfish are growing to ridiculous sizes when they’re dumped into freshwater lakes and ponds. On July 9th, the City of Burnsville, Minnesota put out a tweet asking people not to get rid of live goldfish by putting them into the environment.

If you do, this could be the result:

Yeah, that’s right, giant goldfish. But it’s not just the size of them, its the number of them too regardless of size. A nearby county announced that they had to remove roughly 50,000 goldfish from their local waterways in a single day. Even when they’re not monstrously large, that number of goldfish is not healthy for the environment for a number of reasons.

First and foremost, goldfish aren’t really found in the wild. Centuries ago, goldfish were selectively bred for their color and have since remained a kind of domesticated fish. The goldfish that people get today aren’t fished out of the water somewhere. They’re born and raised in farms in order to be pets. Therefore, they have never truly been a part of the environmental cycle because of how they’ve been selective bred through centuries. Introducing them into the wild is therefore incredibly dangerous in the kind of impact they can have.

What’s also dangerous about them is that they’re basically a variety of carp. Now, not all carp are “bad fish” so to say, but certain kinds of carp can be devastating to the environment. Carp can grow to shockingly large size and are thus voracious eaters. Their appetites can devastate other fish population and their size and tendency to stay near the bottom of water bodies also allows them to splash up a lot of soil and mud. This creates a more difficult environment for feeding and hunting for other animals.

The problem isn’t isolated to Minnesota either. In 2020, in South Carolina, park workers in Oak Grove Lake found a nine pound goldfish in the water. They noted that the fish had to have been dropped off into the water by a pet owner that no longer wanted to care for the fish. As for its size? Well, goldfish can actually grow to fit the environment they’re in, especially when there is an abundant food source to feed from.

It’s one thing to talk about the delicate balance of nature and what invasive species can do, but it’s another thing to actually see the effects of it. Just like some areas have huge problems with feral cats thanks to irresponsible owners trying to dump them into the wild, the same problems can happen in the water. Things don’t have to turn into “Alligator” to have a devastating effect on the environment. If you can support a pet of any kind, don’t get a pet.

And if you realize you’ve bitten off more than you can chew; find someone to take in your pet. Otherwise we’re going to have giant goldfish to contend with alongside murder hornets.

Florida Man “Teaches Alligator a Lesson,” Throws it on Roof