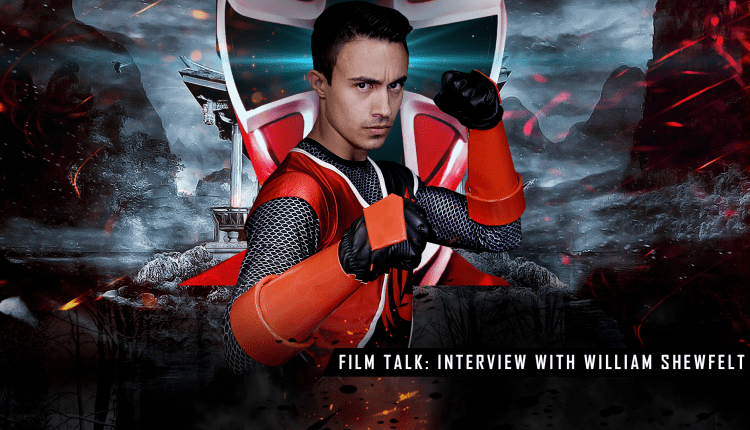 Welcome to the first Film Talk! My name is Colin K. Bass. I write and act for Nerdbot Studios. But now, I’m venturing into the journalism side of things, with a twist. In this ongoing series, I’ll be interviewing fellow filmmakers about their experiences, and asking questions about their life in general.

My first guest is actor, writer, and musician William Shewfelt. You may know him from “Power Rangers: Ninja Steel,” “Solaris: Evolution,” “Rise of the Ninja,” and more!

I’m sure you get a lot of Power Ranger questions… is there a certain one you get asked over and over?

William Shewfelt: If you mean a Power Ranger related question…one of the most asked ones is always “what was it like being on Power Rangers?” I really don’t get tired of answering it because I totally understand the curiosity. It was quite literally a dream come true for myself as well as our cast members. To sum it up, for a brief moment upon booking the role—I was in heaven. I couldn’t believe what was about to happen and I was thrilled that all my hard work had paid off and that you could actually accomplish your dreams. Very soon after that, my mind shifted completely into work mode. I’d constantly think how do I succeed at this? How do I leverage this to succeed afterwards? What should I be focused on right now? I honestly wasn’t very present at the time and put a lot of pressure on myself. But all in all, it was an amazing experience that came with many great learning lessons and some lifelong friendships and memories.

So from acting, writing, and creating fitness content to writing/performing/producing music…was that always the plan? Or did you catch the music bug after recording “Rising Son?”

WS: I certainly caught some sort of bug after recording “Rising Son”…but that’s a story for another time. Honestly music has always been a part of my plan. When I first decided to fully dedicate myself to creating the life of my dreams at 20, part of that dream life included creating music that I loved. But it was a foggy idea and far in the future. I fully expected to focus solely on acting for 10-15 before considering anything else. After acting for 2-3 years, I started to realize that I wasn’t as creatively fulfilled as I thought I would be and that it wasn’t acting per se that I loved, but rather performing. I also enjoyed creating and collaborating, which is harder to do as a beginning actor where you’re often auditioning and learning parts for years before you have a chance to create your own thing. I wanted something that I could fully create and bring to life. Through music I felt I could do that.

So I began experimenting in the studio with different sounds, rapping, singing, different languages. I had a very clear idea of the kind of sound, artists, and songs that moved me and I basically just started emulating that and mixing it all together. In fact I’m still doing that. I’d say I’m in the beginning stages of my music journey…but thank God it’s been very creatively fulfilling and I’m having a blast.

If you could co-star with any actor…who would it be and why?

WS: Besides Colin Bass? Wow, what a good question…let me start with my obvious answer. Arnold Schwarzenegger. It would be less about acting and more about just wanting to hang out with him and learn from him. I would also say Al Pacino would be awesome. He’s obviously an incredible actor but he also seems like a fun person to be around. Johnny Depp would be a fantastic guy to work with also. And if I had a time machine, Marlon Brando.

And what about your dream musical artist?

WS: Another great question! One of my goals in music is to explore multiple genres. So I’d love to collab with The Weeknd, Justin Bieber, Anuel, Enrique Iglesias, Common Kings. There’s not one in particular, but rather to do great songs in numerous genres. It’s all about having fun.

As many viewers know, you star in “Power Rangers: Rise of the Ninja” and “Solaris: Evolution.” If you had it your way, how would you see both of those series ending?

WS: For Rise of the Ninja, I don’t know if I want it to end! I’d love to see multiple seasons, a new boss/villain every season, more series crossovers, and just a long, interesting character arc for Brody. Kind of like the arcs you see in a Game of Thrones or Vikings. I’d also love to see the production, actors, VFX, marketing, stunts, costumes, music elevate every season. So yeah, there’s really no end game in my mind—I personally would just want to see it get better and better over time! As long as the fans are enjoying it and watching, I’m in.

For Solaris, I’m really interested to see a dramatic, emotional, post-apocalyptic ending. I’d want to see that after Ethan/Solaris makes his sacrifice, the world is a different place after. I think there’s so much potential in how those scenes and episodes could play out. I’d hope that its something that deeply moves the audience.

Are there any favorite moments from filming those series that stick out?

The first weekend filming Rise of the Ninja was certainly one for the books—filming out in a snowy Big Bear in California. Any time I’m filming with Colin or Jessica Rey on Rise, it’s always a blast just for the chemistry and banter. For Solaris, I’d say the first few shots on that were exciting as well—the scorch marks, the music, the effects.

If you could give any advice to up and coming actors and musicians, what would you tell them?

Get rid of your success deadlines and plan b’s. Fully commit to going after your dreams, even if it takes a lifetime, even if it kills you. Be willing to keep trying, improving, experimenting, and getting back up for the rest of your life—because it’s actually a lot of fun. And imagine the alternative! Imagine doing something you don’t enjoy for the rest of your life and having that gnawing disappointment all the time. So just go for it—as long as you stay disciplined, have a strategy, and work hard…SOMETHING will happen. Maybe you’ll reach your dreams, or maybe you’ll get close, or maybe just halfway—but any of those outcomes are better than giving up.

Tell us about your writing process for your music? What’s the ideal day of writing for you?

The ideal day of writing for me is hearing a beat or instrumental that I love, recording a topline melody, and immediately starting to hear lyrics and words and themes come to mind. Within 30 minutes, the song is roughly done and I know I have something special.

Unfortunately, that rarely happens. It’s usually just showing up every day, giving it my best shot on different songs, and after a few hours, calling it a day on writing. It’s a great day when I create something that really excites me. But it’s like they say, keep showing up and eventually something’s going to happen.

What’s next for William Shewfelt?

Right now, I’m having a great time working on singles, doing covers, planning my next few steps and improving my music marketing game. I plan to keep doing that while I work towards reaching the next level as a singer.
Thanks to Colin and Nerdbot for all you guys do!