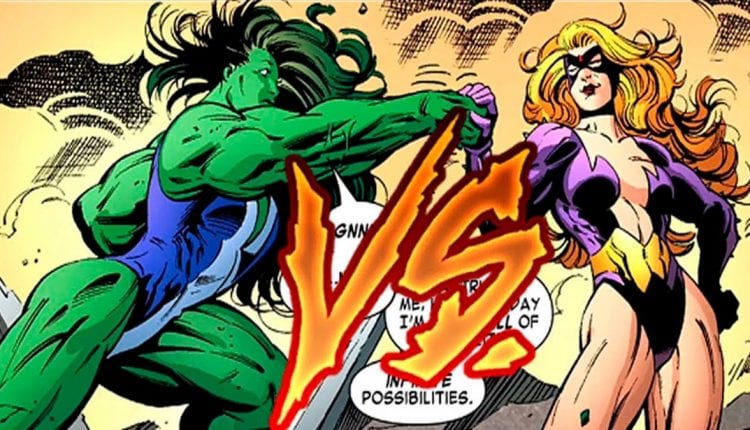 Marvel Studios has added more names to its ever growing MCU cast by reportedly bringing in Jameela Jamil of “The Good Place.” According to early sources, Jamil will play one of She-Hulk’s many arch-nemesis, Titania, in the upcoming Disney+ live-action series staring Tatiana Maslany as the title character.

In the Marvel comics, Mary MacPherran aka Titania began as a normal human, with no powers. But that changed for her when the Denver neighborhood she lived in was ripped from Earth to fuse into Battleword. While there, she runs in Doctor Doom, who gives her super strength and the moniker Titania.

Titania and She-Hulk duke it out many times in the comics, and hopefully they’ll exchange blows in the MCU show as well.

Marvel already has a list of big names coming to the Disney+ show with Tatiana Maslany (“Orphan Black“) playing the titular green character and her alter-ego Jennifer Walters. Walters is a lawyer who deals with superhuman law cases and is also cousin to Mark Ruffalo‘s Bruce Banner/Hulk. Ruffalo will also be on the show reprising his role. Speaking of reprising roles, Tim Roth, will come back after a decade-plus as the Abomination. Doesn’t ring a clue? That’s okay, the last time we saw the Hulk villain was back in 2008 in the close to forgotten MCU movie, “Incredible Hulk” – you know, the one where Ed Norton played Bruce Banner.

Marvel hasn’t yet announced as to when “She-Hulk” will release on Disney+, although it is expected to come out sometime in 2022.

With the success of “WandaVison,” “Falcon and the Winter Soldier” and with the record-breaking debut of “Loki,” it looks like the Marvel Studios Disney+ shows are riding just as high as the theatrical movies. As an avid Marvel fan (before the movies), I can’t wait to see what happens with this entire universe in the future. Let’s hope that with this new show, that Hulk.. oh excuse me… She-Hulk SMASH!

Thanks to Collider for confirming the news.