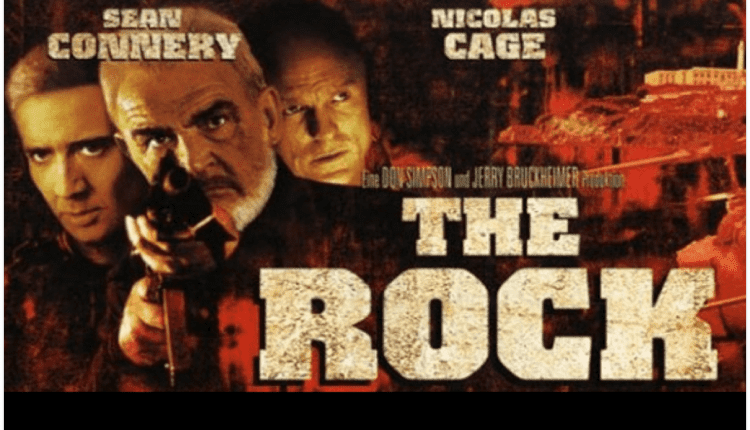 There are many movies that spark the nostalgia of the movie going experience, and “The Rock” is one of them. I can clearly remember buying my ticket at $3.75 for a different movie only to sneak in the theater playing the hot new R-rated summer blockbuster. Yes, I am aware that this dates me as I was just barely becoming a teenager in 1996. Age shaming aside, though, “The Rock” is perfectly 90s and perfectly 90s action, capturing an era of ridiculousness in a pure, unapologetic, star studded blow shit up movie.

I’m going to go as far as to say that it is Michael Bay‘s best film, at the very least top 3. It has all the workings of a Bay film from the implausibility of its plot to its unlikely action hero to its constant need to blow up just about everything that comes into frame. Unlike latter Bay films though, this one is just damn fun. Gleefully relishing in the silliness of its premise and delivering on just about everything you would expect from this kind of movie.

To be fair, I wasn’t even sure I needed to even do a review of “The Rock,” seeing as how I already did “Executive Decision” a few months ago. They’re literally the exact same film released months apart, but one is clearly more successful and memorable than the other. I guess this will be more about why “The Rock” is the better of the two and what makes it watchable even today. For starters, Bay knows what he’s doing here. Say what you want about his eccentricity and weird justification for underaged relationships in the “Transformers” movies (I am never ever going to be ok with the overabundance of references to the Romeo and Juliet in “Transformers: Age of Extinction“) but Bay knows how to blow shit up.

I would argue that prior to him going all in on the Autobots, Bay is a stronger action filmmaker than people give him credit for. It’s easy to point to his shortcomings, especially recently, but “The Rock” is prime Bay and that’s a compliment. There is a self awareness here that we don’t really see anymore from him, as he’s now kind of caricature of his own legacy. No one both in front and behind the camera are trying to convince you that this movie is anything other than pure, unadulterated action entertainment. Because we’re all in on the joke, the film because a fun thrill ride of ridiculous fun, much like the latter “Fast and Furious” films do today.

Additionally, “The Rock” sports one hell of a cast that bring way more to the table than anyone should for a movie about breaking into Alcatraz. Say what you want about Nic Cage, but his strange, erratic delivery and demeanor works here. He’s so easy to root for and so vastly different than the self assured old timey bad ass in Sean Connery that the two end up making a strange brew of buddy cop brilliance. I know Cage has a string of 90s action films like this on his resume, but”The Rock” is special because he feels natural here. Look, I know his filmography is way too extensive and riddled with questionable choices to make any kind of definitive statements about best action performances, but something about this film feels just right. Maybe it’s Connery playing off Cage so well you don’t really notice the Cage-ness, but I’m inclined to believe that Nic has never been more suited for an action role than he is here.

As if two compelling leads that are clearly having a good time wasn’t enough, “The Rock” decides to double down on powerhouse actors and fill the entire enemy line up with recognizable faces. Ed Harris, Michael Biehn, WIlliam Foresythe, John C. McGinley, David Morse, and Tony Todd (to name a few); and many more round out the cast of soldiers and mercenaries and FBI agents. It seems like every single face in “The Rock” is a recognizable one which only adds to the elevation of the film.

Hell, Biehn is a blink and you miss him appearance and it’s still worth it. Harris brings so much to his role as General Frank Hummel you have to wonder if they sent him a different script that seemed more important than the film he’s in. Seriously, Harris is a complex, nuanced villain and brings such a gravitas to a role that really didn’t need or require it. It is these kinds of things that make “The Rock” stand out as a memorable rewatchable timeless 90s action film.

The action is solid and constant, the vision is self aware, the story unfolds at a good pace, and the actors are all bringing their A game to B movie. On paper, “The Rock” simply shouldn’t be this good. It really is a dumb movie, and you’d be forgiven for rolling your eyes every time someone says anything about what happens in the film. But as we’ve come to know, I will always stan for movies that embrace their absurdity and unapologetically execute their vision with keen self awareness. “The Rock” does all of this and does it all well, making it stand out above the long list of 90s action films that are incredibly similar. Seriously, “Executive Decision” is the SAME movie released 3 months earlier but most certainly does not stand the same test of time. These two films transport us to an alternate universe where Nic Cage is a better protagonist than Kurt Russell. I can’t even believe I wrote that sentence, but it in this very rare instance it still holds weight.

I don’t know that I can convince anyone who doesn’t like “The Rock” to find things to enjoy about it. For all the things I love about it, it it certainly riddled with all the things people don’t like about these kinds of action films. For me, all of those things make it a better film. It’s fun, silly, action-packed and well acted, even when they’re being over the top. The premise may be implausible, but everyone involved knows it and it’s a large part of its charm and longevity.

“The Rock” is a definitive action film, both for the 90s and beyond. It is an enjoyable time at the movies, and somehow makes you believe that not only is Alcatraz more intricate than it actually is, but also that Nic Cage went home and married a prom queen.