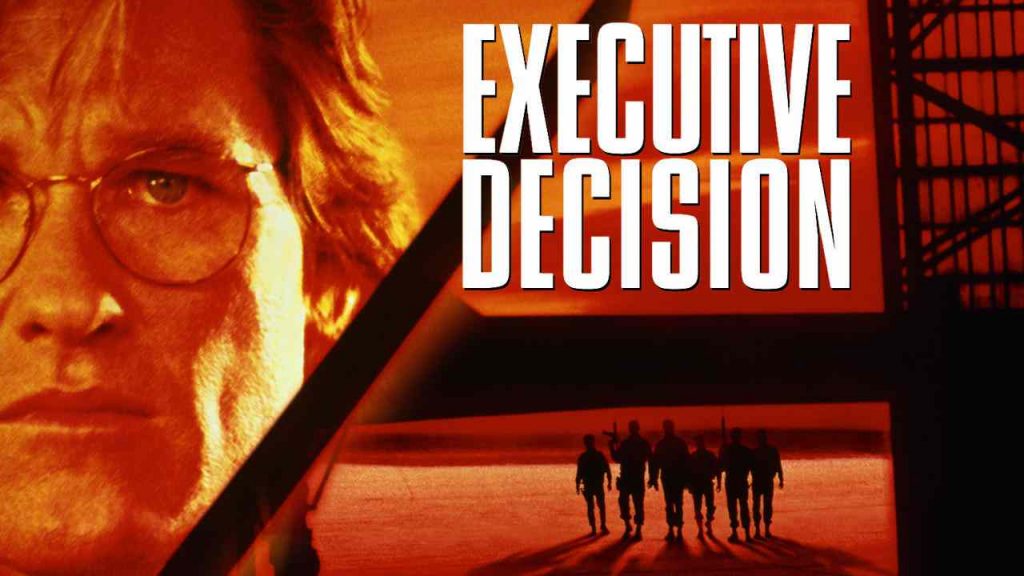 When it comes to 90s action films, there was about a 3 year stint where every single film followed the exact same formula. I don’t mean similar themes for the genre, I mean pretty much any action film from 1995 to 1997 is practically identical, down to the exact plot and characters as all of the other films before and after. “Executive Decision” is both elevated and held back by these constraints, falling victim to becoming “another one of these” rather than leaving its mark on the genre in any memorable way. There’s still enough to be enjoyed, but it is impossible to separate this particular flick from the selection of other, better films around the same time.

Stop me if you’ve heard this one: terrorists take over something valuable to the government, America needs a team of soldiers to infiltrate and save the hostages, and the tech guy or bomb guy or nerd guy needs to come along so he can end up being the real hero and save the day. I’m sure a long list of films came to mind before “Executive Decision” and all of them, including, well, “Executive Decision.” It’s adherence to the 90s action formula probably did the job well enough at the time, but looking back with hindsight, it falls into the more forgettable category of its own genre.

Fun Fact: “Execute Decision” is literally “The Rock” on a plane. No, not Dwayne Johnson, I mean the Nicolas Cage, Sean Connery version of this film. Amazingly, “The Rock” came out a mere 3 months after “Executive Decision,” making both movies that are damn near identical being released in the same year. That isn’t hyperbole either. Both films are so close in their plot and release that while “The Rock” is the far superior film, it has a very “which studio is gonna get the same film out first?” vibe to it. This isn’t uncommon for Hollywood, either. Think about it. “White House Down” and “Olympus Has Fallen,” “Dante’s Peak” and “Volcano,” “Armageddon” and “Deep Impact” etc. All films with damn near identical plots released within the same year with only a handful of months separating them.

Unfortunately for “Executive Decision,” once I discovered its resemblance to its counterpart, the film became less and less interesting to watch. That’s not entirely “The Rock‘s” fault, or the 25 years that have past since the film’s release, either. In such a crowded genre of similar films, it is difficult to stand out, and “The Rock” has the secret weapon of Sean Connery and a much stronger all around cast than “Executive Decision,” which why you remember one over the other. I’m pretty sure that Steven Seagal was suppose to be the Connery character of this film, but he’s shockingly killed within the first 20 minutes leaving only Kurt Russell to be the stand in for Nicolas Cage, but alone this time.

I can’t stress enough how identical these films are. I know that this should be a simple critique of “Executive Decision,” but the film just isn’t good enough to stand on its own, especially because when you actually watch it, you can’t help but think of all the films that did it better. It’s not bad, but it’s also not “The Rock,” and even if you want to try and explain it away by the plane aspect, it’s also not “Air Force One,” which came out one year later and is also far superior.

All of this is the downfall of sticking to the formula a little too closely. Sure, the formula was and sometimes is still tried and true, and if it ain’t broke don’t fix it. But “Executive Decision” is only inventive up until Seagal unexpectedly dies, and ends up running the gambit of everything we’ve seen before and after. You can give the film credit for literally inventing plane technology to get our heroes onto the terrorist filled plane, which is goofy and ridiculous and perfectly fitting for an action movie like this one, but everything becomes familiar to the point boredom after that.

“Executive Decision” isn’t a bad film, it’s merely a forgettable one that is far too similar to ones that have stood the test of time much better. The film lands somewhere in the middle; it’s not the worse of its kind, but there is certainly a long list of others that deserve a watch more than this one.