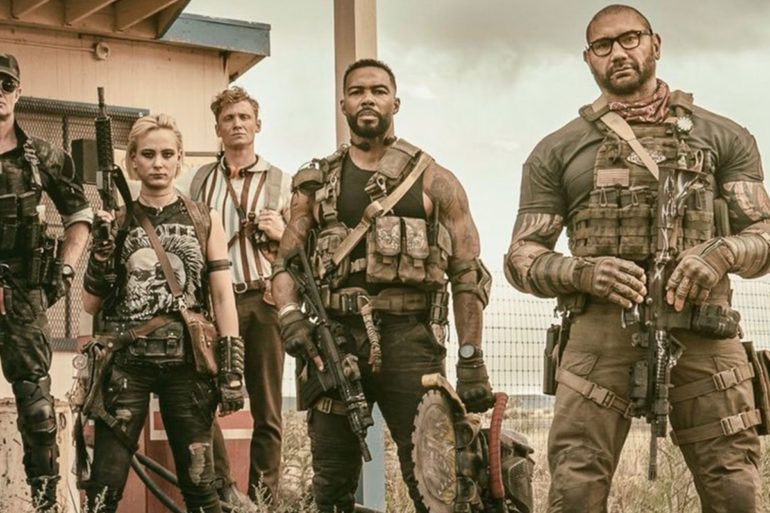 The past few years has only served to remind us what a powerhouse filmmaker can do with the ability to deliver some amazing original content. Unfortunately, the latest release from the DCEU’s chief architect Zack Snyder, “Army of the Dead,” doesn’t even begin to hold up. Dave Bautista leading a rag tag group of zombie-fighting mercenaries on a casino heist in the midst of a sea of the undead – how could it go wrong, right? The result is so lackluster and drawn out that one might start to think back on the horrid “Train to Busan” sequel, “Peninsula” and decide it wasn’t that bad after all.

The setup is straightforward enough – a zombie being transported by military convoy (from Area 51 no less) winds up getting loose and stumbles across Los Vegas, only to turn the bulk of the population into an undead horde. The military walls off the city, containing the threat. Jump to several years later and billionaire Bly Tanaka (played by Hiroyuki Sanada) hires Scott Ward (Bautista) to assemble a team and go into the dead city and lift 200 million dollars from his former casino’s vault. That would seem to be a fun setup, there have definitely been far worse premises for zombie romps, but somehow for all the potential that the story has, it just goes from plot hole to plot hole.

The film cribs liberally (and unimaginably) from “Peninsula,” “Escape from New York,” and “I, Legend.” In the end, the action is lackluster, but where the over two-hour running time feels interminable is anytime the characters try to have a moment to express deep emotions. They aren’t able to make us care about any of these characters or their various interpersonal relationships. There are so many story threads that are touched on, only to never be revisited (and definitely never concluded). It feels like either a half hour should have been cut out, or adding another few hours and carve it into a limited series. As it stands those threads wind up being some of the most compelling elements of the film, but then they go nowhere. The audience winds up being more frustrated than engaged.

One thing that keeps coming up are failures in basic logic in the overall story. It’s ironic that the undead zombies are the soundest aspects of the storyline.

Starting with the heist itself: the team goes in to steal $200 million in 100 dollar bills. One million dollars worth of Benjamins weighs 22 pounds. Even if each person could carry 220 pounds each, that means the eight person crew could only haul out about $80 million in total. The escape plan involves taking a helicopter from the roof, in a model that with the team’s weight on board would again not be able to hold anything close to the amount of cash being planned to be extracted. But even that basic issue, the very accomplished team, when smuggled into Vegas by Lilly the refuge camp’s resident coyote (played by Nora Arnezeder), they walk out through her hidden tunnel and out of the double wide doors of a cargo container, and never bother to close the passageway behind them. Nearly all of these characters have had experience at dealing with the zombies, but they act like they haven’t so much as seen a single George Romero film.

Some of the action sequences are decent, though they have the typical head-scratching aspect of where they keep getting all of their ammunition from. Bautista gives his all to try to give the character some depth, but the script keeps letting him down by taking the wind out of most of his scenes against his daughter, Kate (played by Ella Purnell).

The film actually has both a prequel feature as well as an animated series both in the works. Hopefully those might help expand on the interesting aspects and frame this opening entry into a better light.