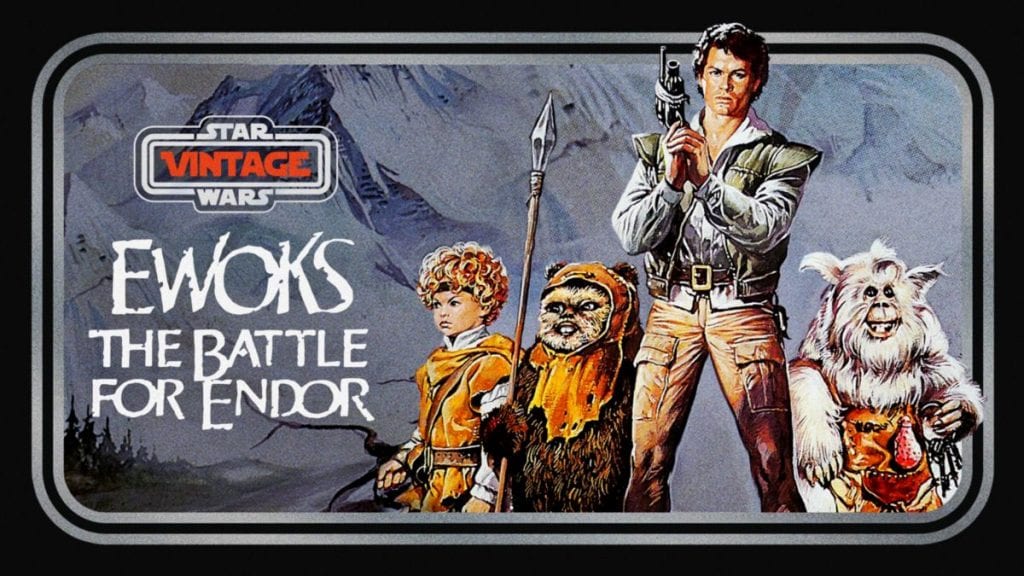 Ok, I’m going to be honest and tell you know I’m not entirely sure what to say about “Ewoks: Battle for Endor.” Not that the film is bad (it’s actually not) or that it doesn’t really warrant critique (it most certainly does), but more because I spent my entire childhood watching it only to be challenged about its existence as an adult. Since they are both coming to Disney+ you definitely don’t want to be Cancelling Disney Plus just yet.

See, if you didn’t grow up knowing “Ewoks: Battle for Endor” existed as a made-for-TV adventure, you would have no reason to believe Star Wars has not one but TWO Ewok centric movies that actually aired in the early 80s.

Hell, my own girlfriend didn’t believe it existed until Disney+ announced they would be adding both films to their streaming line up in April. Having not watched this film in close to 30 years (yes, I’m THAT old) and only vague nostalgic memories to keep it alive in my heart, I finally sat down and gave it another go as an adult. The long and short of it is “Ewoks: Battle for Endor” may be dated and pretty damn silly, heavily geared towards the children of its time, but for all its faults it is actually really well done from a technical standpoint. “Battle For Endor” once again proving that while George Lucas may be a pretty terrible writer, he is and has always been at the forefront of technology.

Serving as a sequel to “Caravan of Courage: An Ewok Adventure” (which you do not need to watch to enjoy or even understand what’s happening here) the film follows Cindel (Aubree Miller), a young girl who’s family has befriended the Ewoks and is preparing to leave Endor. The village is raided by marauders lead by Terak (Carel Struycken) who is searching for a “power” he believes the humans have. After being the only survivor from the raid, Cindel and Wicket (Warwick Davis) meet Noa (Wilford Brimley) and Teek (Niki Botelho), an old man in the woods and a “speedster” creature who they befriend. Noa is working on a star cruiser of his own, but Terak believes that the child understands how to unlock the power from the item he has removed from her families ship. After capturing Cindel, Noa, Wicket and Teek must storm the castle and save their friends before it’s too late.

There’s no denying that story wise, “Ewoks: Battle for Endor” screams prequel George Lucas. Look, I know it’s fun to give him shit as a storyteller as the years have proven that when left to his own devices, things have a way of going south very, very quickly. You can shit on Kennedy and Disney all you want for your own, dumb theories about the new trilogy, but nothing, absolutely NOTHING is worse than something like “Attack of Clones,” a solo, auteur vision of Lucas himself and easily the worst film in all of Star Wars.

Yeah, that prequel is even worse than “Ewoks: Battle for Endor,” which by all accounts has similar struggles but benefits from being much more contained and straightforward. The film doesn’t make a whole lot of sense, and really drops you into an unfamiliar world without much care to explain why any of it is exists or anything is happening in the first place. Hell, if it wasn’t for the fact that Wicket (played by Warwick Davis and donning a voice that sounds exactly like Gus Gus in “Cinderella” ) is a recognizable Ewok, there would be nothing that ties “Battle for Endor” to Star Wars. Marauders, witches, orphaned children and star cruisers are all pretty much staples of any science fiction adventure stories and not explicitly tied to Star Wars as an entity.

On these grounds, “Battle for Endor” isn’t really that bad as much as its forgettable. Even for a children’s story about cuddly creatures and terrifying enemies and an old man in a hut, it all just goes about its story without much care of concern as to why any of it is happening to begin with.

Why IS there a witch (Siân Phillips) who can transform into a raven? Who the hell is Terak and what are these bad guys doing on this moon in the first place? Why does he think a space shit has magical power that can be unlock by a child? My god, did we really just murder this entire girl’s family in the first 5 minutes of this thing? Wait, this is for CHILDREN? What the hell is this, a Pixar film? The point is, “Battle for Endor” asks a lot of questions and doesn’t really seem concerned with answering any of them. It is a film (much like MOST of the Lucas-controlled “Star Wars” entities) that seems far more concerned with their technological advancements than they do about what narrative is being told.

While it may be easy to scoff at some of the special effects in hindsight as you fire up “Battle for Endor,” it is important to remember just how good they actually are for the time. Much of the animation went to Industrial Light and Magic, one of the last strongholds of stop animation before it was replaced with go motion technology. Much like previous Star Wars work, Light and Magic invented techniques like matte paintings, which simply put allowed them to film painted sets and frames without losing any quality. While none of this can really be identified in “Battle for Endor” even if you know what to look for, it is obvious that for most of the film, time and care and craft went into the recreation of Endor and its’ colorful creatures. I know it may be hard to believe now, but “Battle for Endor” literally won an Emmy award for their achievements in Special Effects. I would even go so far as to argue that the costumes and make up deserve some praise, as every marauder is nightmare inducing even if they’re only show for a moment. Big giant set pieces are recreated with impressive landscapes and inventive technology, and “Battle for Ewoks” is about as technically sound as you can get for a made for TV movie in 1984.

Look, I can easily take my nostalgic goggles off and eviscerate the poor acting, silly narrative, and mind numbing dialogue delivery that never gets better the longer “Battle for Endor” goes on. It’s a pretty easy film to dismiss, and even at its best it is really just ok. But honestly, despite being viewed decades later, I still enjoyed myself immensely. Sure the childhood memories of Teek and Ewoks all came flooding back, but even taking all of that into account I still walked away from the film with a sense of pleasantness and enjoyment. The truth is, “Battle for Endor” is better than at least two films in the Star Wars series. I’m not going to debate which two, but no matter which ones you’ve conjured in your mind, “Battle for Endor” simply isn’t a bad watch even as an adult. You can absolutely write it off, but you’re all the better if you just kind of let it do its thing and remember the harshest of truths: Star Wars has and will ALWAYS be for children and merchandise. I know, we all want it to be for us, but it’s not and has never been, and “Ewoks: Battle for Endor” is both a sobering and endearing reminder of that fact.

So, if you wanna prove to your friends that this movie that you watched as a kid does in fact exist, watch it on Disney+. If you want to journey back to a simpler time of “Star Wars” adventures- even if that adventure is pretty silly on the surface with nothing deeper beyond that- watch this movie. And yes, even if you want to rip it up into a million little pieces and adamantly hashtag #NotMyEwoks, you too, should watch “Battle for Endor.”

We can all still be children and enjoy “Star Wars” the way it was intended, and “Ewoks: Battle for Endor” is a great reminder of just how fun and childish it all can be.

If for nothing else, you get to watch Wilford Brimely yell at children. That’s always a good time at the movies.