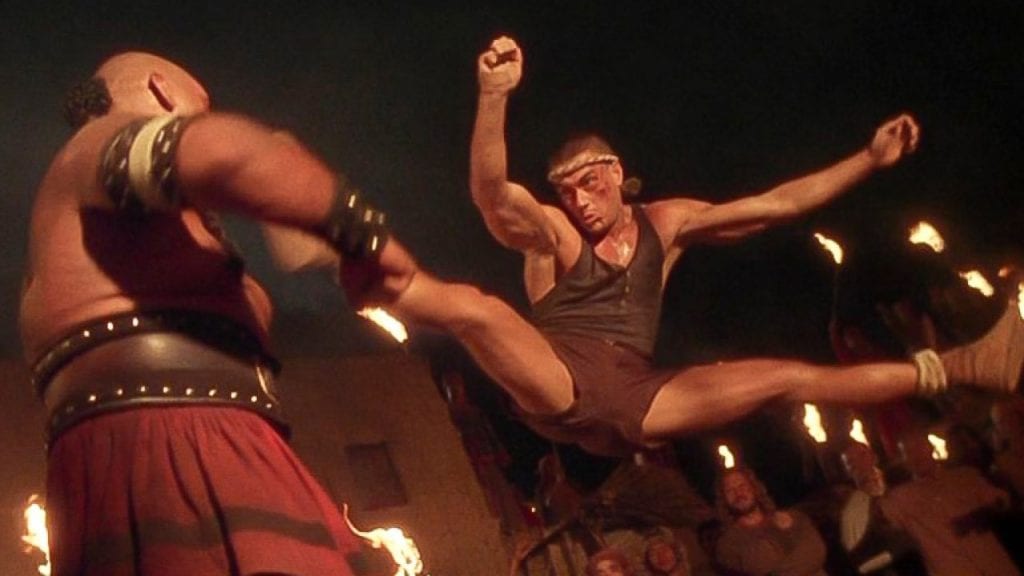 Hollywood is no stranger to shipping the impossible when it comes to Jean Claude Van Damme. For most of his career, we’ve been asked to believe that he’s an accomplished martial artist (he’s not), he’s an American (sure, why not) and perhaps even more of a stretch, he represents America on the grand martial arts and military stages in 80% of his films. I thought I had seen it all, and then I watched “The Quest,” which not only attempts to sell the aforementioned lies, but adds filmmaker to Van Damme’s resume. That’s right, making his directorial debut, something I never thought I would write, “The Quest” features Van Damme both in front of and behind the camera. He’s also a co-writer here, too. I’m not sure whether or not this is his vision in the middle of a coke binge or a sober man filled with ideas, but “The Quest” shows the limits of Van Damme’s ability, and makes for one of the most confusing, narratively messy films I’ve seen in a long time. And yes, that includes the long list of films in the Rated 10% or Less series. “The Quest” narrowly escapes making that list, and despite some decent action scenes and solid set pieces, the film as whole is a baffling experiment of bad story telling and even worse direction.

As with most movies as narratively muddled as “The Quest,” trying to articulate a synopsis is more difficult that describing my thoughts. I’ll do my best, but if it sounds like a spec script for Screenrant’s Pitch Meeting, that’s because it plays out as one without any need for exaggeration or punching up. Ok, so an old guy walks into a bar and beats up a bunch of guys, the bartender asks “Where’d you learn to fight like that?” Alright, now we’ve got an old man telling a story, so that of course takes us to New York City 1925 because….reasons. Chris Dubois (Van Damme) is a clown street performer who also heads a gang of orphan children who steals money from the mob but are found out and Dubois must flee the city. He hides on a boat, is discovered and thus begins one of two off screen montages where he’s a working slave on the ship. Of course, the captain chains him up and is gonna kill him because….reasons, when suddenly, the ship is attacked by a bigger, better ship who kill the crew and sell Dubois to someone on, get this, Muay Thai Island. Montage two, Dubois becomes an absolutely shredded fighter, confronts the guys who sold him out who have showed up to watch the fight and they hatch a plan to steal a golden dragon from a secret tournament. Also there’s a woman who’s a reporter who shows up because, you know, it’s been all dudes and ah f*** it you know what, we’re just gonna make “Bloodsport.”

This is almost exactly how the film plays out, right down to moment where you can see Van Damme decide whatever he was trying to do prior should just be abandoned altogether for the sake of staying in his comfort zone. It feels as jarring to watch as it is to read, like there are at least two or three films happening and, lacking the skill to make them work together, Van Damme opts to stick to what he knows even if it never really makes sense to do so. Honestly, everything prior to the Ghang-gheng tournament could be eliminated, and “The Quest” would be better served as the budget “Bloodsport” knockoff. That’s saying a lot considering that “Bloodsport” is more of a cult classic than a good movie, so “The Quest” acting as the discount version puts it pretty far down the list of must see Van Damme films. “The Quest” is disastrous storytelling, and not even Rodger Moore as Lord Dobbs overacting his heart out is enough of a distraction to blind viewers from just how bad it actually is. Hell, I can’t even offer a valid critique of Janet Gunn as Carrie Newton, the ONLY woman in the entire film who is so pointless and under utilize I said out loud, “Why are you here?” more than once during my viewing.

And yet, “The Quest” is still fun as hell to watch. I can’t really explain it, and I’m the last person to make excuses for bad Van Damme films. But as much as I hated the film from an actual filmmaker’s perspective, the actual tournament is just fun and interesting enough to make you forgive the first 45 minutes. Make no mistake, “The Quest” is bad, but it borders on being so bad its good. At the very least, is laughably entertaining, and not in the way something like “Street Fighter” (another Van Damme flop) is. By contrast, “The Quest” is bad because it’s trying way too hard to be something it isn’t, but that’s also what makes it so much fun to watch. You can see the amateur skillset permeate a majority of the film, but you can also see that Van Damme had a great time being in “Bloodsport” and wanted to try his hand at making his own version. Once “The Quest” gets into this territory, it’s still bad, but I’d be lying if I said it wasn’t damn fun to watch him try to make this work. It’s not a good movie by any stretch, but it’s still somehow easy to consume and enjoyable enough to not be filled with regret after the credits role.

Though everything from a filmmaking perspective is cringe worthy, the film’s strengths is most certainly in its action and set pieces. Van Damme may be a terrible writer and director, but he actually understands how to film a fight and highlight the style diversity of his global competitors. He also seems to have a keen eye for locations, with set designs for the tournament looking almost out of place in how good they look. I don’t believe a stronger, more accomplished director could fix the glaring issues in the script nor the derivatives of other Van Damme films that are undeniably present, but there is a decent film in here buried under a poorly executed one. With a better script and a better director, it could be argued that the film could make it out of the teens on Rotten Tomatoes and claw its way into the high 30s, maybe even 40s. It would still show as rotten, but a better writer/director would be able to latch on to the things that make the film entertaining and bring them to the forefront rather than dancing around with things that don’t matter.

Anyone who walks away from “The Quest” in disappointment and disdain is absolved of any wrongdoing and justified in their conclusions. “The Quest” is a bad movie, and I’m not here to make any excuses to say otherwise. What I will say is that it is also a fun movie, one that doesn’t require much more investment than having it play out in the background and tuning in to check out a style vs style matchup once in a while. How or why or who to provide context is irrelevant, and doesn’t enhance or inform the action unfolding in the slightest. “The Quest” really is a discount “Bloodsport,” and however that makes you feel will determine how you come out on the other side of the journey.

For me, it was a “quest” worth taking, even if I didn’t gain much for taking it.