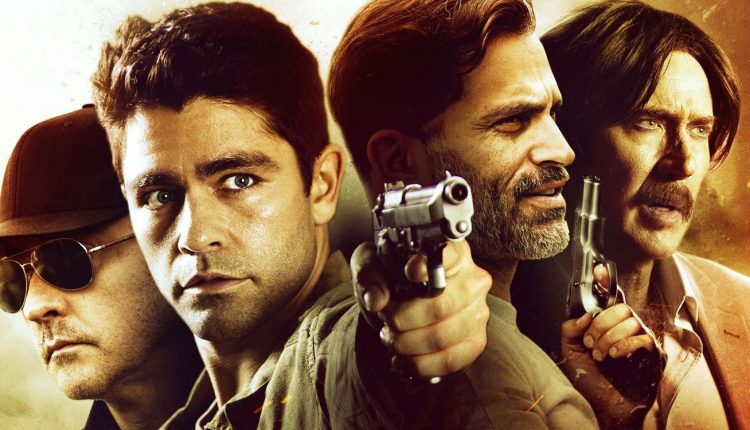 Have you ever wondered what Nicolas Cage would look like with a low budget prosthetic nose, giant sunglasses, and an even worse wig while doing what I can only assume is a variation of Tony Clifton if he were a mobster would look-like? Well, “Arsenal” answers the questions that no one, absolutely no one has ever asked or wanted to see. It’s one thing for Uwe Boll to make an unwatchable video game adaption. It’s quite another for someone to make a sequel to a 1993 box office bomb on purpose and fill it with recognizable faces. “Arsenal” is meandering in its pacing, nonsensical and heavy handed in its plot, and brutally violent without warning or merit.

There are a lot of problems with “Arsenal” (also known as “Southern Fury“) beyond its overstuffed and cliche script and its bizarre casting choices. For starters, the film is self indulgent, self righteous, and far too self important all without being self aware. It’s all well and fine to attempt to string together crime thriller drama tropes as long as you’re acutely aware that that’s what you’re doing. This film can’t look inward and see itself for what it is, resulting is a film that truly believes it’s better than it is and wants viewers to believe in its themes despite them being often indecipherable most of the time.

Much like previous entries into this series, I’m hard pressed to recount the plot. Jason Mosberg‘s script suffers from not enough edits and drafts before reaching its final working script. It narratively feels like a first draft, desperately needing a pass from editors to stamp out bad ideas and focus the story. Instead, we get every facet of every crime thriller drama imaginable, down to two brothers on opposite ends of the tracks, an aging gangster, a troubled niece, a gangster’s brother, and an undercover street cop. I guess “Arsenal” is about family, with Mikey being an older brother screw up who gets entangled in a kidnapping plot and his stand up, model citizen younger brother JP has to head to the seedy underground to save him? Ya, that’s a question because I’m not entirely sure that’s what’s going on here, but its my best guess and best attempt at a synopsis for this thing.

In addition to the script, the cast of this film could not be more jarring. I’m gonna save Nick Cage for the end so you can let that aforementioned image stew in your brain for a little while longer. Adrian Grenier as protagonist JP is a hard sell as a vengeance seeking tough guy, and the poor script doesn’t do him any favors. Likewise, Jonathan Schaech AS the tough guy Mickey could probably work were he placed into a much more functioning narrative. The two are suppose to be brothers, but we only know that through vague mentions and expository lines of dialogue, which in turn ends up being the extent of their relationship. JP cares about Mikey because the script says he does and so that the movie can happen. It’s unfortunate, because I actually enjoy both of these guys in other things. In “Arsenal,” their talents are wasted and miscast.

Did I mention John Cusack is in this thing? Well, he is. And that’s kind about the extent of his purpose in the film, too. He just shows up looking like he just rolled out of his trailer filming something else (probably “Blood Money“), coasts on autopilot and does nothing more than exist. Seriously, his under cover cop Sal is exactly the kind of thing that someone would recommend to delete during the editing process, which I am convinced Mosberg’s script never had one and this is the one and only draft ever in existence. And then there’s Nick Cage as low level gangster Eddie. What a nightmare inducing vision this train wreck is.

Look, Cage is overacting his heart out in typical Cage fashion, but the physical transformation choices are just too outlandish to ignore. The fake nose not only LOOKS fake, but feels fake, so much so you can’t help but laugh every single time Cage appears on screen. Predominately sporting giant sunglasses and doing some weird mumble line delivery where he refuses to open his mouth all the way and insists on talking through his teeth, it’s so over the top ridiculous you’ll wish you could take it back and rip that nose right of his face. It also doesn’t help that “Arsenal” is dead set on subplots from thin air and heavy handed dramatic dialogue wrought with self importance. So watching Cage deliver some long winded, passionate regret (???) about brutally murdering his brother 30 seconds prior sits so strangely in your mind it leaves viewers unsure what to make of it.

I don’t know what it is about bad films, but they all seem to generally have a few things in common that cause them to make the 10% or less list, “Arsenal” being no exception. For starters, all of them suffer from narrative composition, failing to tell a straight forward, linear story and choosing to cram as many subplots as possible regardless of their need or sense. Secondly, why do they all seem to have a sepia tone? What is it about bad movies and yellow hues? Does “Arsenal” think that it can be saved by cinematography and just dimming the lights? Sorry, but it most certainly does NOT make the movie better. We can still see Cage’s nose is fake no matter what filter you throw over it.

All in all, “Arsenal” most certainly earns it’s rating, with some reviewers going as far as to call it the worst film of 2017. They may not be too far off, either. I’m all for Cage hamming it up at any chance I get, but even this couldn’t sell it to me. The package is a mess; overly indulgent and brutal violent without context or necessity. Is it the worse movie of 2017? I’m not entirely sure.

But does it deserve it’s 4% on Rotten Tomatoes?

Absolutely. This is a burn all copies movie. And throw in that Cage nose for good measure.

“Vikings”: How Well Do You Know The Main Characters’ Lines?