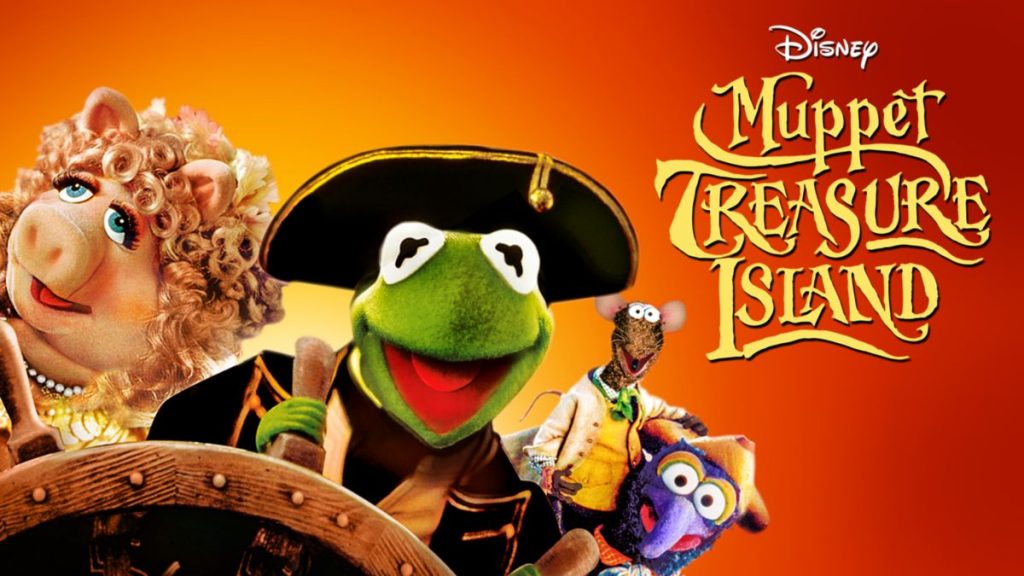 You read that right- “Muppet Treasure Island” celebrates its 25th anniversary this month, coinciding with the release of The Muppets series on Disney+ as well. I can’t quite remember the last time I sat down and watching this film from start to finish. Not that I have anything against the Muppets; they raised me like many of you, but I recall it escaping my coming of age years and solely being viewed as adult with hindsight rather than in its current released climate. “Muppet Treasure Island” is the fifth entry into the Muppets feature film franchise, and for the most part, doesn’t miss a beat. From its music to its reimagining of classic tales and perfect blend of childish slapstick mixed with self aware adult nods, it is a fun watch for any Muppet fan.

Like its predecessors, “Muppet Treasure Island” blends human actors with muppet characters, with the human actors taking the front seat as our primary protagonists and antagonists and the Muppets rounding out the supporting cast of well known Treasure Island characters. Much like its source material, the film follows young Jim Hawkins as he comes into a treasure map and sets sail on an adventure to find it. On his voyage, his meets and befriends Long John Silver, who turns out to be a villainous pirate out to claim the treasure for himself. With the help of his Muppet friends, Hawkins must brave the treacherous seas and become the hero he was born to be, rescuing his friends from danger and discovering the treasure before Long John Silver does.

The blend of humans and Muppets is almost flawless here, with “Muppet Treasure Island” creating a fully realized world where both exist without attention or difference being drawn to either. Their co-existence allows for the film to reimagine the age old tale with both types, rounding out the cast and notable characters as they see fit. While some muppets are more relegated to filler characters and others being more prominent supporting characters, “Muppet Treasure Island” does well enough to make the world robust and interesting for both types alike.

It’s a smart move, because any time there’s a weak link (like say, Kevin Bishop as Jim Hawkins) they are always paired with a recognizable and always on muppet, like Hawkins being paired with the hilarious duo Gonzo and Rizzo. That’s probably being a bit too harsh on Bishop. Were I the age of a young boy seeking adventure, it probably wouldn’t bother me in the slightest since he exists specifically for the younger audience. Let’s just say he does fine for what is needed and leave it at that. He’s no Tim Curry as Long John Silver, but then again, who in the world could be?

As far as humans go, you don’t get much better than Curry hamming it up to the absolute max in “Muppet Treasure Island.” Tim Curry is typically best when he’s allowed to let lose, and from the moment he appears below deck, sporting one leg and crutch, you’re immediately on board for whatever pirate shenanigans awaits you. Seriously, Curry is an absolute delight here, possibly the best compliment to his muppet counterparts. Fully aware of himself, the story, and intention, Curry dials himself up to 11 and “Muppet Treasure Island” is all the better for it.

The Muppets are all here and just as fun as ever, filling their roles with slapstick comedy, catchy musical numbers, fourth wall breaks, and of course, irreverent humor. Rewatching “Muppet Treasure Island” as adult most certainly hits different, and there were multiple times where I had to stop and ask myself why any adult would let their child watch this. While sure, none of the humor geared towards adults would be understood by children, but more so that ever this entry seems a bit more brazen with its approach. It also the darkest entry into the Muppets franchise, though to be fair you’re better off embracing the violence and savagery of pirate life than you are trying to pretend it doesn’t and didn’t exist.

Even in the songs about death and rum drinking and yes, murder, it’s hard to imagine how parents let “Muppet Treasure Island” get away with so much. Obviously, the muppets didn’t stick with these dark tones, opting to continue the much more lighthearted approach in their latter films. But this is perhaps what makes “Muppet Treasure Island” so unique and so enjoyable 25 years later. Sure, none what is in the film is new to or for the Muppets themselves, it is still refreshing to see the studio and makers fully embrace their off colored humor and tone so completely.

It certainly holds up well both for children newly introduced to them and adults who grew up on them. As an adult viewer returning to the film after many years, there’s a lot to enjoy that you might have missed, and it is worth a go if you haven’t taken to the high seas with Captain Smollett recently. In a world that seems like it’s getting closer and closer to end with every passing day, watching the Muppets sing about their peril with “Cabin Fever” is eerily fitting for our current climate of being stuck at home and wildly entertaining to watch them do it with complete silliness.

“Muppet Treasure Island” is just downright fun, earning its place among the classics and holding up 25 years later.