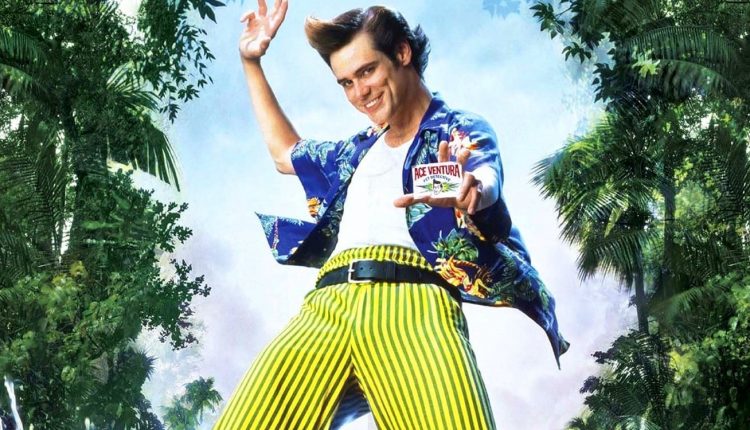 Full disclosure, adult me and 15 year old me are going to be at odds on this one. “Ace Ventura: When Nature Calls” is treasured film from youth that has somehow become unwatchable as an adult. This is despite me regularly quoting it out of context on a regular basis. Criticizing “Ace Ventura: When Nature Calls” feels like a betrayal of my youth. I can feel the teenager in me telling me I’ve sold out and have grown up a grinch. But I’ve taken this nostalgic journey enough now to know that some films hold their own through time and others do not. Unfortunately, this is really the latter.


An immediate follow up to “Ace Ventura: Pet Detective,” this film sees the return of Ace Ventura (Jim Carrey) on another animal adventure. After failing to save a raccoon that falls to its death, Ace is in a deep depression in a Tibetan monastery.

British correspondent Fulton Greenwall (a perfectly bumbling Ian McNiece) finds him and convinces him to take on an important case in African in which Ventura must find a precious missing bat to stop two rival tribes from breaking out into an all out war. Of course not all is as it seems, and once again Ace must use his skills to uncover a dastardly plot before war ensues.

I will do my best not to lambast “Ace Ventura: When Nature Calls” and give it some benefit of the doubt to appease my teenage self. For that, let’s talk about what works. Adult me is resigned to say that it’s slim pickings, but there is a charm here, driven primarily by Jim Carrey given free rein to do as he pleases. The jokes are exhaustingly constant, but there are some memorable comedic moments and solid quotes that have made their way into pop culture indefinitely. “Bumblebee Tuna” as a botched greeting comes to mind, as well as the “Circle of Death” and “Rhino Birth” scenes becoming internet meme staples.

While Carrey shoulders the film with outrageous, over the top antics, the film itself is an absolute mess and a stark contrast from its predecessor. Beginning with Carrey, he takes an eccentric but somewhat grounded character and turns him into a caricature of an already absurd character. Dialing up Ace Ventura to 11 becomes far too loud, and outside of the aforementioned moments, it begins to dull the senses to its outrageous slapstick comedy. When isolated scene by scene, this film does have some genuinely funny moments, but that’s just it. “When Nature Calls” is a string of silly Jim Carrey sketches loosely connected by an even sillier story that becomes a cacophony of sounds and fart jokes.

Even the “When Nature Calls” opening is a stark contrast from its predecessor, and puts the viewer on notice that outside of the titular character, nothing about what made “Ace Ventura Pet Detective” so enjoyable is in its sequel. Beginning the film with a direct “Cliffhanger” parody is an indication that “When Nature Calls” is set on acting as a standalone film that is only recognizable in name only. And the film commits this foul again and often, transitioning almost directly into a “Twilight Zone” parody within the first 10 minutes. Its comedic sensory overload that very rarely sticks the landing.

Despite being somewhat unwatchable 25 years later, “Ace Ventura: When Nature Calls” still manages to sport an impressive soundtrack. Packed with 90s hit makers, it is one of those rare times where the collection of music is almost better than the film itself (here’s looking at you Batman and Robin). The soundtrack his everyone from Sting, to the Goo Goo Dolls to Blues Traveller, and even Montell Jordan. It’s surprisingly eclectic, and could be enjoyed completely independently of the film itself (again, here’s looking at you Batman Forever).

Even as I write all of this, the teenager in me is seething underneath and forcing fond memories of everything I just criticized. To be honest, I can’t tell if I’m just being too harsh and should indulge him or carry on as a the critic I’ve grown up to be. Perhaps “Ace Ventura: When Nature Calls” can be both. I will never tire of the fond memories I have of endlessly watching this film over and over again, and to say it has not become a permanent part of my vernacular would be lie to both parts. So perhaps it’s ok to look at it objectively with disdain, noting that as a film it ultimately fails on most levels. But as a nostalgic collection of sexual innuendos and fart jokes, The White Devil may still have us saying “allllrighty then” no matter how old and grumpy we get.

“Emergency” Buddy Comedy with Something…