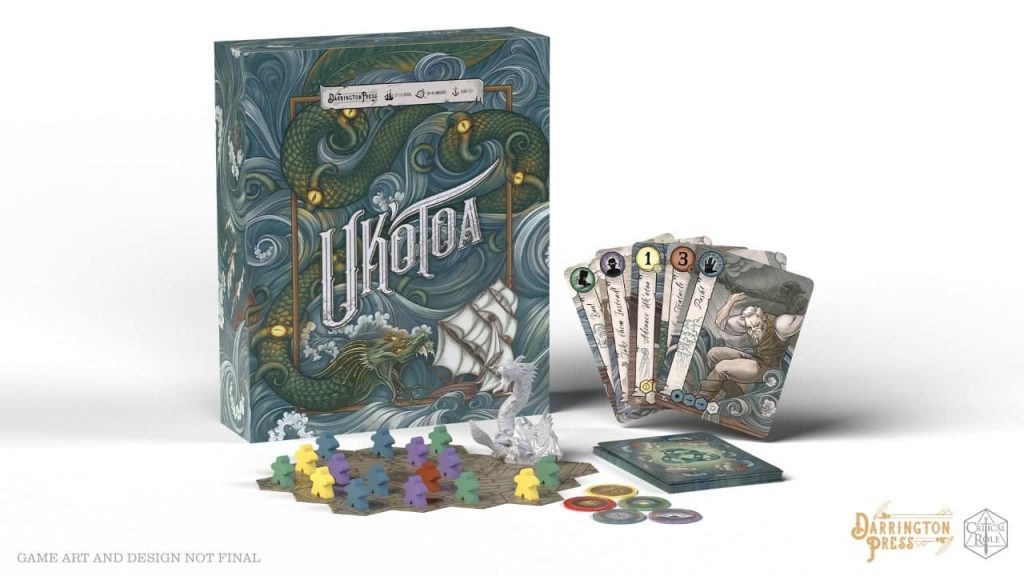 This is absolutely wonderful news if you are a fan of Dungeons & Dragons streaming series “Critical Role,” as the team has just announced a set of table top games they are creating are coming in the next year!

The 2021 titles include the semi-cooperative game Uk’otoa, the legacy-lite campaign game Critical Role Adventures (in which players play as the heroes from Vox Machina, the tabletop RPG Syndicult designed by Matt Mercer, and the co-op card game Guardians of Matrimonia.

CB: Will players need to know much about Critical Role to understand Uk’otoa, or does the game act as a gateway to the wider world of Critical Role?

Norman: This game takes place in the world of Tal’Dorei and as a result, there are lots of fun details that fans will enjoy. However, at the end of the day, Uk’otoa is a game anyone can play. Enjoy Grandma fighting for both Ank’Harel and The Revelry as she moves The Great Leviathan across the board!

CB: What are Darrington Press’s plans for 2021 in addition to Uk’otoa? Can you tell us anything else about the other games?

Norman: Along with Uk’otoa, we have one more Critical Role themed game slated for 2021, which is a cooperative, legacy-lite big box board game called Critical Role Adventures, a modern magical role-playing game set in criminal underworlds titled Syndicult, and Guardians of Matrimonia, a cooperative card game that was actually made for Matt and Marisha’s wedding back in the day!

And, CB also had descriptions of the upcoming titles:

A battle for life and death on the high Lucidian seas! This flagship title from Darrington Press is a tactical game of semi-cooperative card play as factions of sailors vie to be the last claimed by the raging sea leviathan Uk’otoa. As the ship slowly falls into the ocean, you’ll have to run, push, and sacrifice others to win! Fans of Critical Role know Uk’otoa as the ex-patron of warlock Fjord (played by Travis Willingham). Who could say whether these tales hold any truth? Fjord isn’t telling.

Embark on your own journey through Exandria with Critical Role Adventures! Play as the upstart adventurers Vox Machina and overcome treacherous challenges. This cooperative legacy-lite campaign game uses a unique narrative social, and combat mechanic, luring you back session after session. Within this enormous box, you’ll find a host of hidden treasures and a rich storybook to guide you through thrilling combat, dynamic character growth, and tales worthy of the name Vox Machina!

Syndicult is an original modern magic roleplaying game designed by Matthew Mercer in which mob families jealously guard secrets and battle it out for power on the city streets. Featuring a simple storytelling dice mechanic, Syndicult is a low magic world where all bets are off.

Fight the monsters, save the party! Guardians of Matrimonia is a cooperative card game where players have pre-built decks that are pitted against a deck of monsters (party crashers). If your deck runs out, everyone loses. But if you battle your way through the entire party crasher deck, everyone wins!