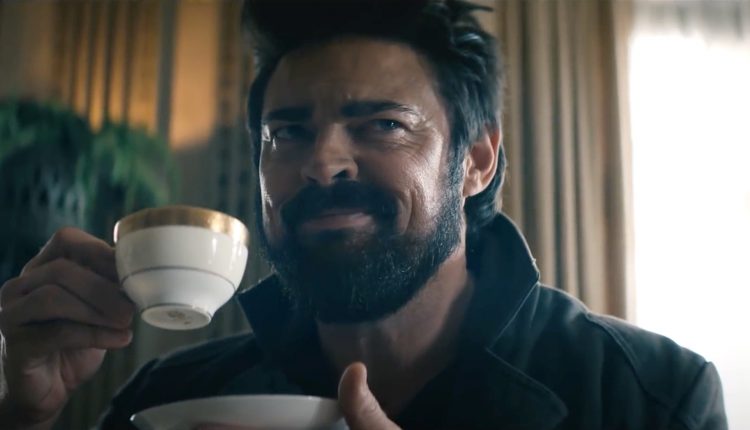 Amazon’s hit series “The Boys” is returning for a second season, and this morning the streaming service released yet-another (that they’re saying is the final) trailer for the sophomore season. It’s almost three-minutes long, and hits incredibly hard, with lots of profanity yay!

So, consider that your NSFW warning. You know, just in case you’re working from home includes younger persons or those offended by lots of uses of the F word.

There were two new posters released, too.

During last month’s San Diego Comic Con (SDCC At Home) event, Amazon announced that the series had been renewed for a third season. And, bonus- a new talk show hosted by Aisha Tyler called “Prime Rewind: Inside The Boys“ will be coming with season 2 as well!

The even more intense, more insane Season 2 finds The Boys on the run from the law, hunted by the Supes, and desperately trying to regroup and fight back against Vought. In hiding, Hughie (Jack Quaid), Mother’s Milk (Laz Alonso), Frenchie (Tomer Capon) and Kimiko (Karen Fukuhara) try to adjust to a new normal, with Butcher (Karl Urban) nowhere to be found.

Meanwhile, Starlight (Erin Moriarty) must navigate her place in The Seven as Homelander (Antony Starr) sets his sights on taking complete control. His power is threatened with the addition of Stormfront (Aya Cash), a social media-savvy new Supe, who has an agenda of her own. On top of that, the Supervillain threat takes center stage and makes waves as Vought seeks to capitalize on the nation’s paranoia.
The Supes of The Seven also include Queen Maeve (Dominique McElligott), A-Train (Jessie T. Usher), The Deep (Chace Crawford) and Black Noir (Nathan Mitchell). Recurring stars in season two include Claudia Doumit, Goran Visnijc, Malcolm Barrett, Colby Minifie, Shantel VanSanten, Cameron Crovetti, PJ Byrne, Laila Robbins and Giancarlo Esposito returning as Vought boss Stan Edgar, among others.

A “The Simpsons” Vans Collection is Coming Soon!