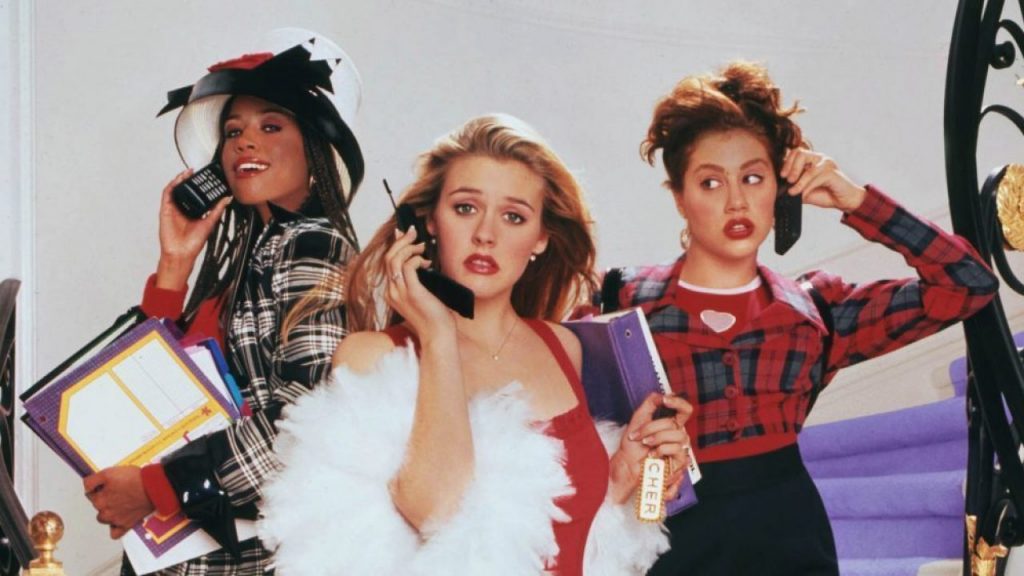 For better or worse, “Clueless” is a film trapped in the times it was made. It is a perfect representation of Mid 90s filmmaking, capturing every aspect of the culture. While there are many ways in which this time capsule is extremely problematic, the film still ranks high on most 90s cult classic lists. From fashion to lingo to music trends (the soundtrack is killer), “Clueless” sparks an unparalleled nostalgia for those of us that grew up during the time. With a young up and coming cast and undeniable proof that Paul Rudd is in fact a vampire, “Clueless” is a classic 90s film that still holds up despite its inability to be culturally relevant today.

Loosely based on the famous Jane Austin novel “Emma,” “Clueless” follows Beverly Hills debutant Cher Horowitz (Alicia Silverstone), a high school teen at the top of her social ladder. After she renegotiates her grades to improve her report card by facilitating a romance between two of her teachers, Cher decides that she wants to continue to doing “good deeds.” With the help of her best friend Dionne (Stacey Dash), they decide to transform new girl Tai Fraiser (the late Brittany Murphy) from tragically unhip to social elite. All of her good deeds seem to go awry, and Cher must undergo some self reflection and discover true friendship, kindness, and romance.

Before we get into all of the problems that plague this 90s classic, there is a lot of greatness that “Clueless” has to offer. The young cast is absolutely brilliant. Everyone is having the most fun you can have in their roles, hilariously playing up the exaggerated versions of 90s teenagers. There is a lot of great comedic timing from everyone involved, and it’s hard to find a cast member that doesn’t pull their weight. There is an innocence and naivety to these characters, and the cast captures the subtext to near perfection. Though actors like Paul Rudd, Donald Faison and Breckin Meyers all went on to have long careers, it is surprising that Alicia Silverstone and Stacey Dash never quite capitalized on the “Clueless” success.

To be fair, Silverstone tried all throughout the 90s and Dash seemed to talk her way out of tinseltown for years. Luckily, we have “Clueless” to remember how good they can all be and how good they are together.

In addition to the great performances, “Clueless” is also extremely self aware. From the writing to directing, the film knows that it is both a parody of teenager films while simultaneously being one itself. It is credited for setting 90s fashion and lingo trends while also exaggerating them to be laughed at. “Clueless” being a product of its time it is one of the films greatest strengths, and this self awareness cements the film as a staple of 90s film culture.

Being a product of its time is also the film’s greatest weakness. It is so rooted in 90s culture that much of the plot fall apart under the slightest scrutiny. For example, Cher has one black friend and her boyfriend (Faison) checks every box of black men stereotypes. For the 90s, this was considered diversity in film. Furthermore, their relationship is as toxic and borderline abusive as a couple can get. While meant to be funny at the time, our current culture would not find it humorous in the slightest. While “Clueless” was released two years before Ellen Degeneres came out, it has just about every LGBTQ stereotype you can think of for both men and women alike. There’s also issues with consent, a glossed over stint in rehab, and the barely mentioned eating disorder that Cher definitely has.

Perhaps the biggest issue with the film is the relationship between Josh (Paul Rudd) and Cher. While the film tries to put a crowbar separation between the two by making them ex-step siblings, it is still disturbing in just about every way. The ex doesn’t change the fact that they are step siblings, that there is an inappropriate age gap between them, and their father seems to have absolutely no issue with his daughter dating his step son. While many other romcoms are guilty of doing similar things with romantic relationships (“Never Been Kissed” for example) it is more glaring and uncomfortable in “Clueless” than other films.

While the film loses steam the longer it goes and is riddled with cultural issues that are unacceptable in today’s climate, “Clueless” is still one of the funniest and best teenage films of its time. It is still classically 90s in the best and worst of ways, capturing all aspects of its culture and standing tall as an example of its time. It simultaneously mocks its culture while paying homage to it. With top notch performances and an infinite combination of quotes, “Clueless” is classically 90s and always leaves you wishing “As If” was still a common phrase.