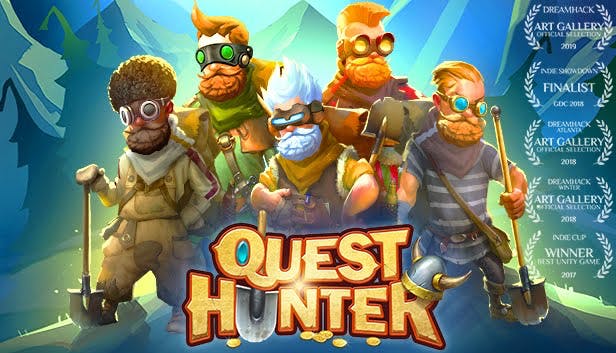 All action-RPG fans, rejoice! The highly anticipated action-RPG game Quest Hunter is coming on Xbox One this May! Quest Hunter is an isometric action-role playing game where your decisions move the story further. This highly entertaining game is simple and easy to play. Search for treasure, secrets, and loots while decoding puzzles. Rig out your character with the best gear, increase the levels of your skills, and defeat main villains. Get cozy and play it alone, with friends, or even organize an online party for up to four max players!

Standard features include the following: Plot-driven RPG, Cooperative mode, Random Generated Dungeons, Powers and skills, Weapons, armors, and items, Monsters and bosses, Treasure, and trophies, Be warned: the light of the torch will be your survival.

Quest hunter has own casino version. Before the developers of “Quest Hunter” went for X-box, they adapted the game to the casino platforms. “Quest hunter” developers created the first version for slots. Casino online slots had the privilege to get the attention of quest lovers. Casino players are big fans of quest games, especially when it’s played on the slot platform. The slot gives them a chance to play different levels and have various themes on each step. Game developers say that game is actual heat and the real deal for quest lovers, especially on the slot-adapted version. The story of the quest is the hands of the player and they can unveil new stories on each level. Quest is perfectly suitable with slot as a passion for action games is not lost at all. The player can choose characters. The slot offers various characters and each of them has a different role in searching for a national treasure. Just like Nicolas Cage’s character in “National Treasure”, you’ll need to run through the different buildings to find the hidden treasure. In a word, the game has debuted on slot platforms successfully before hitting the top spot on X-box charts.

Other Exciting Games to Debut on Xbox This May 2020

Numerous games make their debut on Xbox One every week, but which Xbox games in May 2020 will stand out?

·        Archaica: The Path of Light – Your mission is to proceed through the fabled Path of Light; traverse an ancient and picturesque world. Use your cleverness and challenge your logical thinking to merge the powers of the artifacts.

·         Gato Roboto – You get to play as a cat tasked to save your captain and his wrecked spaceship from the perils of an alien underworld. Adventure awaits for the most fearless of cats!

·         Help Will Come Tomorrow –The only way to win is to understand the personality of the characters and use that knowledge to flourish relationships among them, avoiding conflicts and raising moral.

·         Sunless Sea: Submariners Edition – Set in a Victorian Gothic setting, this RPG revolves around discovery, melancholy, and death. Search for your father’s bones. Defy the deities of the sea.

·         Obey Me – This game is a 3D brawler that focuses on the story of two misfit demons as the clash with mobs of mutants, infernal fiends, and heavenly machines.

·         Deliver Us The Moon – Set on an apocalyptic future where the Earth’s natural resources are exhausted, Deliver Us The Moon is a Sci-Fi thriller where a single astronaut gets deployed to the moon to fulfill one mission: save humanity from impending doom.

·         Quest Hunter – Quest Hunter, is an action-RPG game where your decisions move the story further. This highly entertaining game is simple and easy to play. Get cozy and play it alone, with friends, or even organize an online party for up to four max players!

·         MotoGP 2020 – Get a taste of all the new additions the MotoGP 2020. Featuring the new Managerial Career mode, have fun with the upgrades a graphics improvement. Personalize your ride and outfit! Compete against the legend or your friends online! MotoGP 2020 will debut on April 23. Pre-order yours now for just $50.

·         Quern: Undying Thoughts –Be the one to unravel the truth of what happened to Quern. Discover its mysteries and mold its future.

Which of these games do you like the most? Make sure to pre-order the game if you want to have a fun and enjoyable time. Are you looking for a console upgrade? Go ahead and check out the latest deals on Xbox One X deals to sate your curiosity.