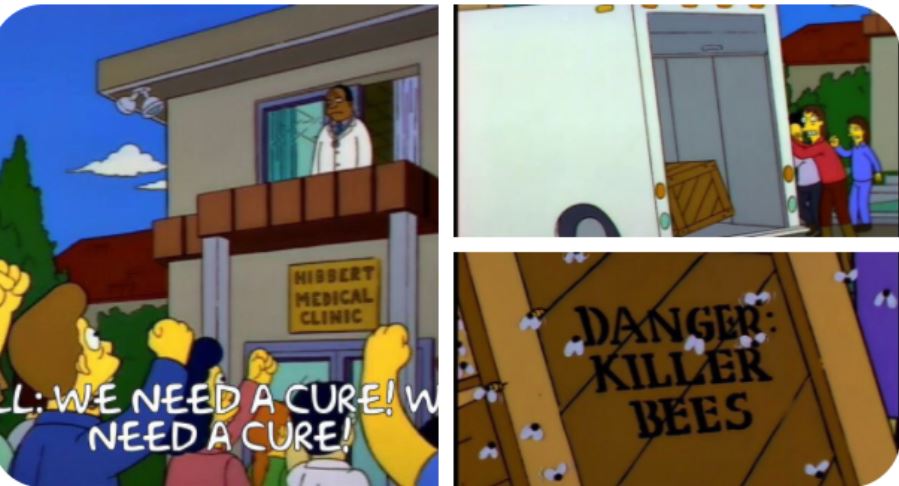 How “The Simpsons” Predicted 2020 Coronavirus and Murder Wasps

So it looks like The Simpsons did it again. Along with their other predictions like the Siegfried and Roy Tiger attack, smartwatches and Trump becoming president. They’ve been known to predict many things that have actually happened but now we have the footage of the time they predicted 2020 events.

This scene is from The Simpsons season 4, episode 21, “Marge in Chains”. The illness in this episode instead comes from Japan and is dubbed the “The Osaka Flu”. Sound familiar? Now dubbed racist to call things after a place of origin we call it COVID-19 or coronavirus but in the past sicknesses were called by the name of origin. And our own President Trump recently was under fire due to him calling it the “Chinese Virus”.

People are also under shelter at home orders and have been protesting about their rights for a haircut. Not quite the same as people shouting about a cure but you get the rioting imagery just the same. In the video you see people saying “we want a cure” and Doc Hibbert saying he doesn’t have it. Then they go crazy because they want a placebo.

It’s then that the people start rioting and knocking stuff over uncovering a crate of killer bees. AKA Murder Wasps. Currently they have been spotted in the United States and we are trying to get control of the population. They decimate bee colonies by decapitating them and feeding their mandibles to their young. And they are the cause of death of about 30 people in Japan a year due to multiple stings and the venom they carry.

Now whether or not these wasps are actually a cure is highly unlikely but if The Simpsons predicted it I say give it a shot. What do we have to lose?

So now the question is what will they predict next. Do we just close our eyes and point to an episode on the screen after scrolling through them? Or maybe we’re just that predictable that The Simpsons had us all figured out from the beginning.