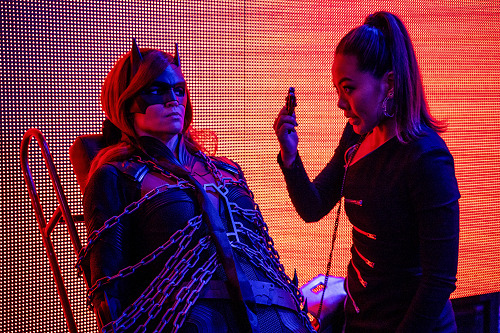 We’ve made it to the 18th episode of the CW’s freshman season of ‘Batwoman‘, If you Believe in me, I’ll Believe in you, and Kate and company are racing to recover a journal filled with Bat Secrets and Alice and Mouse Makes some moves.

Can Kate (Ruby Rose) and Friends take down Gotham’s Mafia? What plans are Alice (Rachel Skarsten) setting into motion? Before we dig into it, be warned that after the following image we’ll be getting into episode spoilers.

Now the opening action sequence was well choreographed, although the camera tracking on the action was distracting – the camera movement and angles was unmotivated. This episode’s director, James Bamford (who has served as a stunt man on more than 60 episodes of ‘Arrow‘ before stepping into the director’s chair for 17 so far), did incorporate a lot of interesting angles during the episodes, particularly the tracking shots.

Ruby Roses acting was actually kinda charming this episode, and seeing her operate without drama at the forefront of her mind was really refreshing. There are times during the first couple of episodes where her delivers can be really rigid, but its clear that she’s gotten better.

The center piece of this episode revolved around the Journal mentioned in the last episode that contains all of the schismatics to Batman equipment. And it is enable watching everyone scramble for the journal, with team Bat and Alice and company trying their best.

Also bringing up the fact that Kate brought property and lowered the rent was really cool, especially since this has been mentioned before, not not brought back up until now.Their plan wasn’t really clever or well thought out at all. If this is team Batwoman with confidence, then they need humble themselves and work on their strategy more.

The Alice / Hush / Magpie secondary story was, like last time, really fun and engaging. Alice and Mouse’s role as the “King and Queen” of Arkham gives the characters an interesting environment to play in.

The mafia and their actions ranged from legitimately terrifying to silly, and that mood shift didn’t take me out of the moment.Mary’s eagerness to help out is really earnest and relatable, and the fact that she is able to help in end is really gratifying

Brianna’s betrayal is a genuine twist that actually fits with her character, which is appreciated. The whole sister twist doesn’t work as well as said betrayal, but is a fun little jab at another dysfunctional sibling relationship.

Since the next episode promoted the rise of Hush, in full comic bandages, etc., things are gonna get interesting. Since many of the characters have been built up through the season, all that remains is the finale which’ll be paramount to the shows overall quality.

Batwoman airs 8/7 c Sunday Nights and is available on the CW app.

How “The Simpsons” Predicted 2020 Coronavirus and Murder Wasps