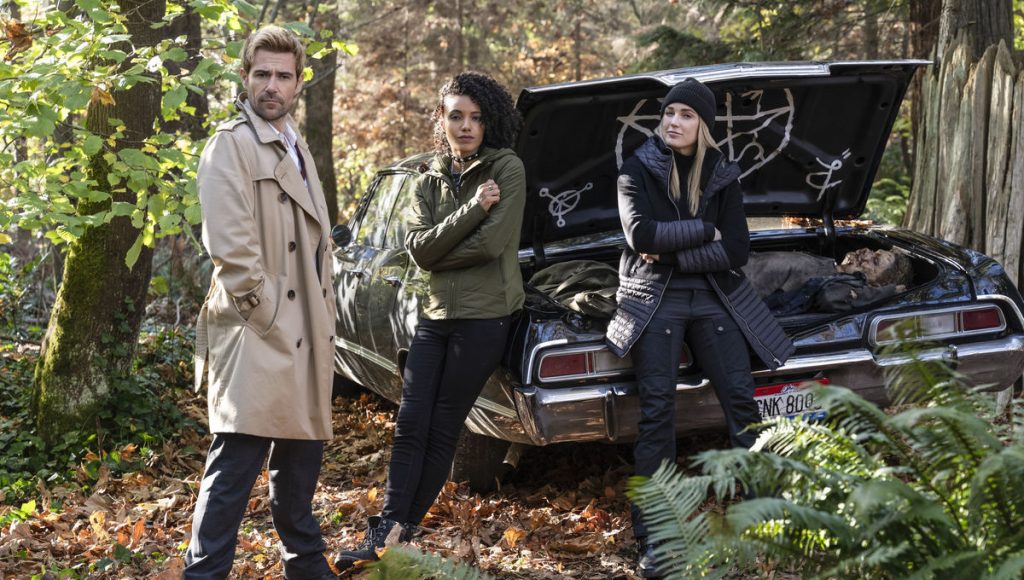 The Legends of Tomorrow from the Arrowverse will cross paths with another CW show – Supernatural – in an upcoming episode (scheduled for March 24). Sadly, we won’t see Sam or Dean (or Castiel) in the crossover. Instead, the Supernatural character crossing over will be Dean’s baby, the Winchester’s 1967 Chevy Impala. And before you say a car can’t be a character (unless, of course, it is Knightrider‘s KITT), remember that the Supernatural episode “Baby” centered around the impala.

In photos from the Legends of Tomorrow episode “Zari, Not Zari”, the Legends characters Constantine (Matt Ryan), Charlie (Maisie Richardson-Sellers), and Sara (Caity Lotz ) are seen rummaging around in the trunk of the Impala, with its distinctive demon trap visible on the inside. (The car used in the episode is said to be a replica created by a Supernatural fan. How thrilled that fan must be to see the car on a show, even if it isn’t Supernatural!) Sadly the Legends won’t actually be venturing into the Supernatural universe; in the crossover episode, they get involved with a TV show called “Supernatural” being filmed in British Columbia while they search for the Loom of Fate. This show-within-a-show idea echoes “Wormhole Extreme” on SG-1 or even better the infamous “French Mistake” episode of Supernatural in which Sam and Dean were sent to an alternate universe where they were—actors on a TV show called “Supernatural”.

Legends of Tomorrow co-showrunner Phil Klemmer said that the producers of Supernatural helped out the crossover by allowing some of their show’s musical score to be used in the Legends episode. Klemmer said that “[W]e wanted to do a spooky, Predator-style skulk-around-the-woods episode and at the 11th hour decided to have the Legends intersect with the crew of Supernatural.” There are supposed to be some other nods to the real-life Supernatural show throughout the episode.

This unexpected crossover echoes another crossover we saw during the recent Crisis on Infinite Earths event (which was full of cameos). During that event, Constantine, John Diggle (David Ramsey), and Mia Smoak (Katherine McNamara) sought help from the Devil himself, Lucifer Morningstar (Tom Ellis) of the TV show Lucifer, which apparently takes place on the appropriately named Arrowverse Earth-666. That cameo, which occurred timewise as a prequel to the Lucifer TV series, had a brief mention of some previous interactions between Lucifer, Constantine, and Maze. Which leaves us wondering if we will ever get the details on that backstory.

Supernatural is set to wrap up the series with its 15th and final season, returning on March 16 to Mondays instead of its usual Thursday spot. Though at Comic-Con, Jensen Ackles told fans “we love you, and we won’t be gone long, I promise.” Could that mean an appearance by Sam and Dean sometime in the Legends future? Even better might be if, like Constantine, they could somehow find a new home on the Waverider! Stranger things have happened – on both shows