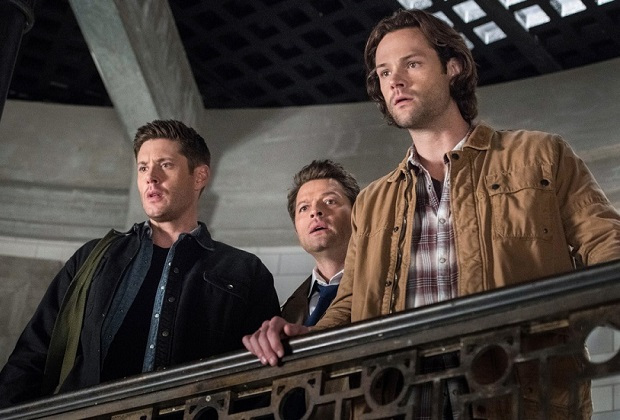 Cast of Supernatural Confirms They Won’t Be Gone for Long!

Supernatural has been a part of our lives for 15 years. We as fans have become friends and in some ways family; not just with other fans but the cast and crew of the show as well. So when it was announced in March that the show would be airing it’s final season this fall, many hearts were broken not just the fans but those of the cast and crew as well.

This past weekend was comic con and the cast was present for one last year as the supernatural cast many interviews were held, tears were shed and laughter was shared. However TWO bombs were dropped in possibly a good way.

We all know that it has always been J2’s choice to end the show…and with the rest of the cast and crew they made the unamious decision and announced it in March. At Comic con Jared Padalecki “let the cat out of the bag” so to speak when he said “Jensen texted me last week saying that he could do this for two more years”. Then Jensen himself chimed in with his own words “we love you, and we won’t be gone long, I promise.”

So is this hope that our beloved show may NOT be ending for a couple of years? Does this mean there may be a movie? Or a spin off?

For the 15th season, Executive Producer Andrew Dabb has confirmed the return of Ruth Connell, Jake Abel, and Shoshonna Stern. I as most fans am hoping for Mark Sheppard’s return as well as Richard Speight Jr. I mean if we are getting the band back together one last time…lets do it right.