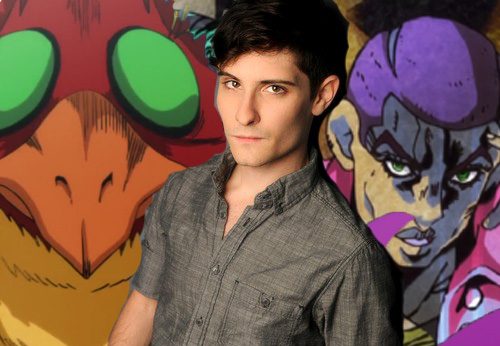 For those you who may not know Jonah Scott, he is one of many talented voice actors working in the industry. He’s done a wide range of voice acting from audio books, to anime, and video games. Scott has even been cast for the lead in the upcoming Dying Light 2. But being in the acting scene isn’t new to Scott at all, he’s been doing professional voice acting for the past 6 years now.

Much like every great actor he has a pretty amazing origin story. Scott studied Musical Theatre at Western Kentucky University, but was a bit confused on what avenue to follow with his studies.

“I was a freshman in college and I had the tough choice of doing stage work (Off-Broadway, Shakespeare or Repertory Theatre) or Film and TV”

He was soon informed of the hardships he’d face doing what he studied at a professional level. Knowing the toll that it could take on his body in the long run, made him second guess what he wanted to do. Being at a crossed road in life not to be sure on what to do his, he and his girlfriend at the time had a brilliant idea gaming late one night. (as most great ideas come) And that was to pressure voice acting professionally.

“I had a eureka moment. I had never given it a second thought but yeah, people get paid to do that; and you can make a living. And it’s fun as fu*k. So I worked the indie online scene in college. I got out and I moved to LA with $200, a damn good friend and a floor to sleep on. Now we’re here”

A near Cinderella story, Scott moved to LA with only a couple of bucks in his pocket. And soon after he began working professionally for companies such as funimation and others. And even though he works in professional studios with big name people he is still human, and finds himself in awe he’s working alongside such giants in the industry.

“Matthew Mercer is a high tier Demi-God to me. I have never met him. I have friends that are in VERY close proximity to him often. But I have always wanted to meet him at work. In passing. A subtle “Hey I’m doing the thing too and you inspired me to get here” kind of deal. But I’d probably freak out and ask him to sign my McCree Alarm Clock. Another is Roger Craig Smith. We tend to play similar characters and if I had one iota of that man’s talent I think I’d be set. Oh yeah. And Troy Baker. But he’s on everyone’s list so he doesn’t really count.”

As stated before scott does VA for video games as well. Saying how it can be a bit different based on what kind of game you’re doing. You do get to have some room for creativity but you still have to hit your marks to make the game as immersive as possible.

Scott is still fairly new still in the industry but has been making some huge plays. For instance he was casted in the hit series One Punch Man as Phoenix Man. And only a few months later appearing in yet another big anime JoJo’s Bizarre Adventure as Formaggio. Being in two huges shows back to back only pushed his career further and exposing him to a lot more people.

And with all that exposure he had learned quickly. Such as doing adult things like making sure you properly schedule your day to day out, as well as taxes. Two very important things everyone should learn. On the other end of the spectrum he finds talking about himself a bit odd, but loves to do so at conventions and talk to fans.

“No problem I’ll talk all day, it’s my job there. Sure, cool things are happening and I am SO DAMN EXCITED.”

But even though he has been making some pretty huge plays lately, Scott has just started doing voice acting full time last year! Making such a huge jump like that would scare anyone fully putting yourself out there like that. But early last year Scott dealt with a truly heartbreaking event, that almost changed his life completely.

“I started working regularly last year, at a horrific time in my life. I lost my mother suddenly to a Heart Attack  early in 2019. I didn’t know if I could keep going. I contemplated moving home. I was terrified. She would always tell me to just keep going. After I had some friends reassure me that I was wanted and needed in the community. I wasn’t nervous at all. Living in another’s shadow made me the most nervous. A lot of people try to pin you down for an ‘archetype’ or compare you to other actors or whatever. ‘Oh he plays villains, or heroes, he sounds like x’. That’s a crock. You aren’t just selling a voice, people are buying you. Be yourself. You’re the only one like you. It’s hard and you’ll be nervous at first. But you just need to keep going”

As for other things he’d love to do motion capture is up there on his list, but he knows it’s going to take some time to get to that. Other hopes he has is to work with 2K on a Bioshock game if given the chance, as well as anything he could do for Blizzard. Also working with Riot Games, even though he got to work with them briefly he’d kill to be a Champion in the game.

Lastly he wanted to tell anyone thinking of becoming a voice actor to do it! He states better than I ever could.

“ Get your fundamentals together. Watching hundreds of episodes of dubbed anime and playing video games does not teach you the skills those actors had to create those performances. I have studied acting for almost 17 years, gotten several degrees and I still am learning to keep pace with my INCREDIBLE peers. Read your Uta Hagen. Your Stanislavsky. Get into some shows. Community theatre. Even being in the ensemble will teach you SO MUCH.”

With all that being said Jonah Scott is by far one of the kindest people I’ve met. It’s clear he loves what he does and it shows, not only in his work but how he presents himself. I can’t wait to see what else he does in this industry because if I’d had to guess I say he’s going on to do some big things. Be sure to keep up to date with him on his social medias