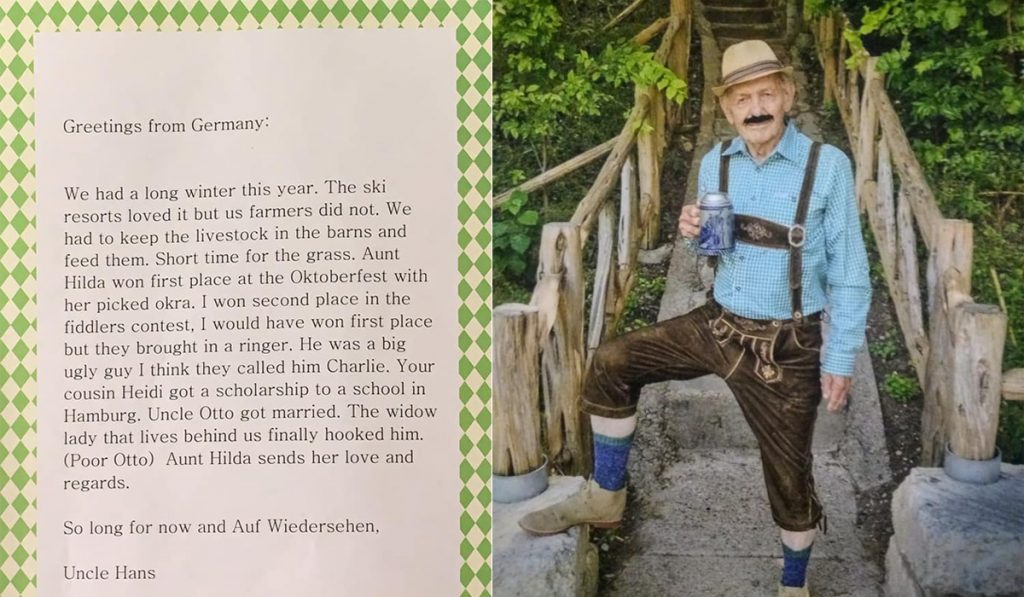 While browsing through my absolute favorite Facebook group, Weird second hand finds that just need to be shared, I came across a post by a woman named Sarah Padgett. She had posted about her grandfather who would send her family pictures and a letter each month. Each time dressed as a new character and the letter written as the new persona. Martin Padgett(age 91) is a mystery since Martin may not even be his real name, but he answers to it and the family has adopted it as his official name. I was able to speak with Sarah a bit about her grandpa.

Martin is one of five brothers! And his official name isn’t even Martin! There is myth surrounding the name on his birth certificate but he will answer to: Mart, AWood, AC, Atwood, A Coyle, Mr Padgett

Martin worked for a church furniture and equipment company in Waco Texas where he was an organ tuner. This was when pipe organs would take up whole rooms. He knows every church in Texas that he had worked on. Some of the churches sadly didn’t last when the oil boom fizzled out.

Once he became a grandpa he was a natural! He and his late wife ( my grandmother who passed in 2007) practically raised us. He was always the strongest man I knew, an expert at hide and seek, talented Domino stacker and still make time for a quick nap on the livingroom couch. The kinda guy that would sit in 100 degree heat drinking day old coffee.

When we were kids he had a beard made out of cotton balls to play Santa. Then he decided to be a French Santa Claus because an ascot and pipe were readily in supply.

He has always stayed busy by woodworking , making puzzles and even writing a book! About the last ten years Martin has worked alongside my dad for his plumbing business. He and my dad bicker like an old married couple but in their down time you can find them in Martin’s back yard playing target practice with a slingshot. One of his greatest collections is his slingshots he has hand made from wood to even metal!

He’s always liked thrift stores and dressing up (it embarrasses my dad to no end) for a family gathering or to greet family friends that are in Texas for the first time. There’s ample downtime these days for work so they go to the salvation army every Wednesday for a sale. He looks for stuff to add to his latest and even later characters. The characters will mostly develop around what props he comes across while thrifting. Also the locations he takes the pics always fuel his persona. I really think he is just making his way around the globe to give every country a dedication!

My dad doesn’t mind his characters but leaves all the helping stuff to my Aunt. Aunt Celeste has really made this all possible. She takes his pictures and prints his letters to be mailed. She lets him have fun considering he’s 91 and she knows how happy these projects make him despite his unending trivia he wants Celeste to Google.

As a kid I knew Martin was different than most grandpa’s but the response to his adventures has been so heart warming. It only makes sense that he should bring smiles to faces across the globe. He’s been my treasure since I was a kid and I think those that don’t have a Martin in their lives can just go through his pics and letters and for a moment experience his charisma the way I have for thirty years.

Every character is absolutely fleshed out and uniquely original every time. This is just how creative he is, knowing how his characters will walk and talk, what their job is, even their hobbies.