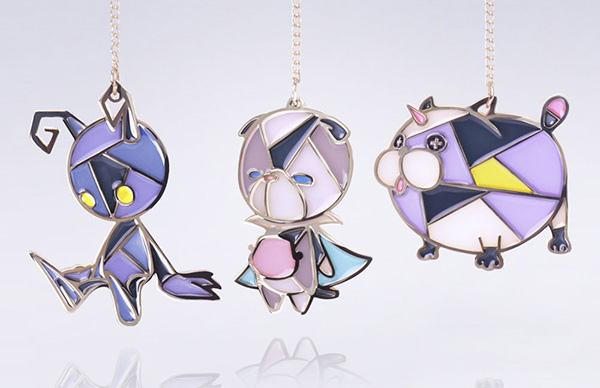 The holidays are on their way and Square Enix is making sure there is plenty of holiday cheer to go around! Square Enix has announced a ton of new Kingdom Hearts merchandise from digital clocks to phone cases. There is certainly something for every keyblade wielder in your life.

Next, we have the adorable Shadow action doll. This super soft doll has bendable limbs so that you can put it in whatever pose you like. Unlike other Shadows, this one will try to steal your heart with love. The doll releases on April 25th for 5,280 yen (about $48).

Looking for something smaller? Square Enix is also releasing some beautiful stained glass keychains. Each keychain is cast in metal and pastel resin. You get a Shadow Heartless, Chirithy, and the rolly polly Meow Wow as part of a three keychain set. Releasing April 25th, they will cost you 4,180 yen ( about $39).

Still haven’t found what you are looking for? Perhaps these wall stickers are what you want. Each sticker features artwork of Sora by series director Tetsuya Nomura. The art is accompanied with iconic quotes from the series. These stickers release December 7th and cost 1,980 yen (around $18) a piece.

Finally, you can’t forget about your phone. If you want to show your love for Kingdom Hearts off to the world, then these phone cases may be perfect for you. Releasing on December 21st, these iPhone 7/8 cases are sure to please dedicated fans. There are four designs to choose from, each costing 3,278 yen (around $30).