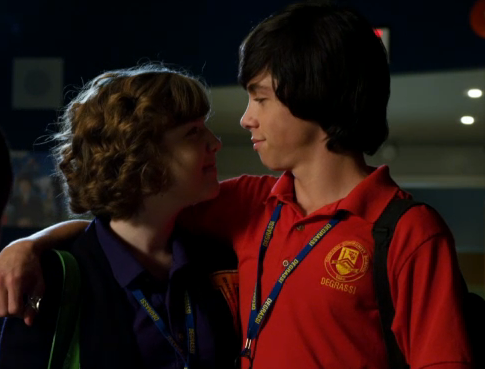 What Keeps Me Coming Back to Degrassi?

Last week I made the decision to binge some Degrassi, for probably the sixth time this year, and it got me thinking… What really keeps me coming back for more?

Degrassi started out in 1979 with The Kids of Degrassi Street and continued with many of the same characters through the years with Degrassi Junior High and Degrassi High. These shows ran all the way to 1991 and was one of the first of its kind to cover teen life and real teen issues, like sex, abuse, drugs, pregnancy, and average school life.

In 2001 the show finally continued with Degrassi: the Next Generation, which saw the return of some of the now adult characters from the previous shows, like Snake, Spike, Joey, and Caitlin, among the new stars of the show, with Spikes daughter Emma at the center of the drama. This was the Degrassi that I grew up with, that helped me through my teen years. The show continued to tackle tough teen issues like rape, abuse, drugs, love, and coming out.

By 2010 the show entered its 10th season and there was almost a completely new cast of characters. The show had dropped the “the Next Generation” from it’s name, but it also gained something incredible. Something that kept me glued to the show up until the very damn end. Eclare.

No, not the pastry, the couple. In season ten they introduced the troubled Eli, an emo boy who drives a hearse, played by the amazingly talented Munro Chambers. Eli became the main love interest for Clare, the bookish Christian girl, played by Aislinn Paul, and voila! The show exploded in popularity. But what makes Eclare so special?

I honestly can’t explain it. From the moment I heard the line, “You’ve got pretty eyes.” I was done for. Honestly, Eli and Clare seem doomed from the start. They start out as partners in English class just as Clare’s parents are heading toward a nasty divorce, which puts things on rocky ground from the start. As they begin to get closer, Eli starts to pull away, and reveals to Clare that he is not over his dead ex girlfriend yet, so he asks for time. When they finally start dating, things immediately begin to get rocky again when Clare discovers that Eli is a hoarder, then the writers throw about a million other wrenches at them, Eli becomes overwhelmed by his mental illness, and they break up at the end of the season.

Fast forward through the awkward clustercrap that is season 11 to season 12 and Eclare is back together! Yay! Heart eyes! During this season, the little couple that could endures Clare’s sexual assault at her co-op, more of Eli’s struggles through mental illness and subsequent drug use, ANOTHER FREAKING BREAK UP, and even some post prom sex, and make it out even stronger than they were when they went in. Then came the worst season of Degrassi history.

As soon as we go into season 13 we find out that Clare has cancer (really, writers?!). Eli comes back from his summer job working on Bret Barnett’s new film to be with her through chemotherapy, and she fortunately goes into remission. This season sees Clare and Eli struggle to stay connected in their long distance relationship while Eli is off at NYU. Eli even cheats on Clare with a girl at college and they break up momentarily just in time for Clare to suddenly be attracted to the vile Drew Torres. She tells him about Eli’s betrayal, kisses him, and runs away to get back together with Eli. They continue to struggle with the distance until they inevitably break up and Clare has sex with Drew. The season wraps on Clare’s visit to New York for a college interview at Columbia University, where she’s been stranded at Eli’s dorm because of horrible storms in the area. After her interview he confesses his love for her, just before she heads back home and finds out shes pregnant (WHAT).

Season 14 picks up with Clare thinking shes pregnant with Drew’s baby and planning on having an abortion. Realizing that she may never be able to get pregnant again because of the cancer, she ultimately decides to keep the baby, but has to figure out how to tell Eli that the baby isn’t his. Again, we get a bunch of on again, off again with them, until we find out that the baby is actually Eli’s. Yaaayyy. But, of course he’s a total jerk to her when she tries to tell him and won’t listen and, in one of the biggest asshole moments of Degrassi history, calls her a whore for sleeping with Drew. Of course he eventually finds out the truth and tries to win her back, which eventually works. Just in time for them to lose the baby. Yep, the writers officially hate this couple.

The episode where Clare is in denial over losing the baby and just wants to push on through life is easily one of the most heartbreaking things I’ve ever watched. The episode aired four years ago and I still can’t watch it without crying. She tries to drive to Columbia University in New York on her own to tell them what happened so that she and Eli can live out their dream, but she agrees, reluctantly, to allow Eli to come, just in case she goes into labor while they’re on the road. They stop at a road stop at some point and talk and cry to each other about what their son might have been like, in one of the most heart wrenching scenes of Degrassi history. Clare then decides to come back and go through the induction process and give birth to her child.

Eli and Clare then try to carry on as a couple, and even go to prom together. Before prom, Eli presents Clare with a box with a key in it, asking her to move in with him after she graduates. And she freaking declines. Because the writers hate this couple. She decides that she doesn’t want to just follow Eli to New York and she wants to take a year to figure things out, and try to make things work long distance, because that worked so well the first time around. The season, and Eclare ends with Eli once again telling Clare that she has pretty eyes, and they kiss.

Degrassi continued on Netflix with Next Class, but Eli and Clare never return, so it doesn’t matter. Eclare added an amazing romantic element to the show that I didn’t know it needed until they got there. They truly were the little couple that could, right up until they left the show, and it was never the same again.