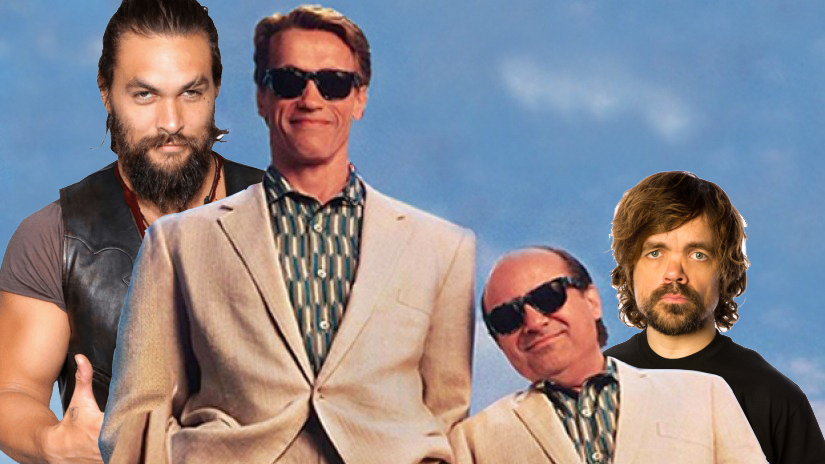 No, Jason Momoa and Peter Dinklage are not actually twins separated at birth… but what if they were?

Kind of sounds like the premise of a 1988 movie starring Arnold Schwarzenegger and Danny DeVito. Two dudes, completely different, including size, appearance, yet they are twins. Then, in your typical Hollywood fashion, the brothers are reunited and go figure, each one is able to help the other, which leads to a blossoming relationship. Yes, that is a brief, but surprisingly accurate three sentence description of the classic comedy.

Though the wheels of production haven’t started spinning yet, the Aquaman studhorse expressed a good amount of enthusiasm when asked at Celebrity Fan Fest in San Antonio about maybe joining forces with Dinklage to bring the comedy back to life;

“F**kin’ tell me where to sign! Absolutely. That’d be amazing. I love that movie.”

Momoa then requested folks take to Twitter to build some momentum. #Twins2

I’d like to thank MentalFloss.com via ComicBook.com for reporting on the story.

So, we all know it’s 2019, and pretty much everything, even my life story, is on the table for a Hollywood reboot. Why wouldn’t something like a new Twins starring Momoa and Dinklage get put into production? Honestly, this little exchange at a convention could be the spark of electricity that turns on the ever coveted studio greenlight.

Seriously, I’m doing all but guaranteeing this movie gets made.

Who would be a better fit for a Twins reboot? Let Nerdbot know in the comments!!