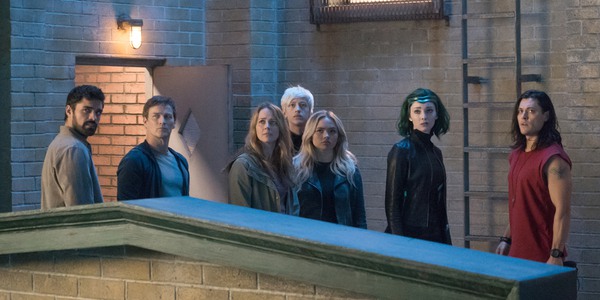 This lead in is possibly the most hopeful I’ve been for this entire series. While the show has been so far entertaining, and definitely thrown some twists and turns, this teaser is everything. Lets recap real quick though.

Season 2 of Fox’s The Gifted has been focusing on two main plot lines- our mutant underground trying to find some sort of hope after the destruction of their entire infrastructure, and the two members of our resistance fighting their own demons and their new allegiance to series antagonists The Hellfire Club.

So basically : Hellfire Club Leader Reeva is killed from a suicidal blast from Reed, Esme forces a confession out of Benedict Ryan and joins the group, Jace is left unconscious in the hospital,Lorena and Marcos reunite with their child and Erg( leader of the morlocks) approaches them to rebuild the Mutant Underground.

The scene we are left with is John leading the group outside of the building where they encounter, once thought to be dead, Blink appears from a portal ( a fiery landscape)  stating that they need to come with her and that there’s something they need to see.

Esme joining the group is expected and happily received – being the more compassionate of the Frost sisters it’s great to see her fall into place as the teams resident psychic. She’s been very sympathetic to the cause and although her sisters are still at large, her connection to them and her goals of mutant human coexistence will be an interesting storyline.

The death of Reed is sad but not entirely unwelcome. The constant struggle with his powers were consistently and issue which never was in sight of ever being resolved. And Andy finally coming back into the fold is great for him, since his character could’ve easily gone bad.

Clarice’s death was a major shock to fans and mutants alike. Not only was she a refreshing outlook, skillset and look, her return is a window of possibilities. Did she get away and this is a future version of her ? Or a X-man from an alternate timeline.

Now we are getting real strong Days of Future Past vibes, with this X-man’s portal origin seeming to be filled with destruction and fire.

Her entrance is a signal for an expansion of the series that it needs. The certain environment, issues, drama and cinematography that started the series off is starting to all blur together and this teases the possibility of change. And I suppose that’s what’s most exciting about the season finale.

What’s your opinion? Do you think the Gifted is going in the right direction? Tell us in the comments!

‘Persona 5’ May Be Coming to Nintendo Switch