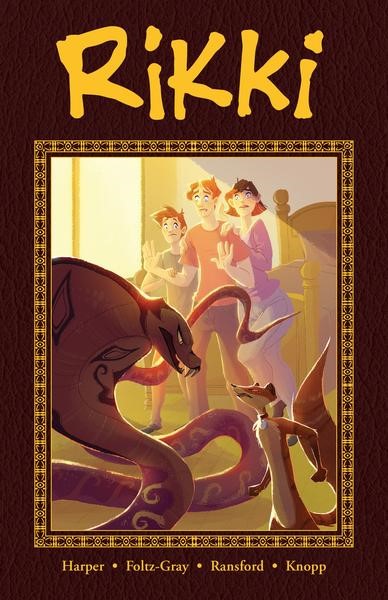 This graphic novel is based on the short story “Rikki-Tikki-Tavi” from The Jungle Book by Rudyard Kipling. Synopsis: A young mongoose raised to fear mankind is separated from his burrow during a fierce storm. He awakens in a human home with no memory of who or what he is. Now, with a pair of deadly king cobras targeting his new family and his memories slowly returning, he must choose between the values of the mongoose society he was born into and the humans he has come to care for. This full-color graphic novel includes a reprinting of the original short story by Rudyard Kipling as well as bonus art pieces by Christine Knopp, Patrick Ballesteros, and Travis Hanson.

First off let me just say that as a child I was given The Jungle Book as a bedtime story and was always in love with stories in stories. Seeing adaptations and the different directions that stories can go by different writers, artists, performers, etc is an eye-opening experience to see all the different perspectives from people and how did their inspirations lead them to what they create?

I met Norm Harper when he had a booth at Nerdbot Con 2017, I was captivated by the pitch that I got “Rikki” and dove straight into the comic to see what adventures Rikki, the Mongoose, would go on.

The journey of finding one’s purpose, finding approval of those around, starting fresh, and defending those close are just a few things that happen in this graphic novel. Rikki, at the beginning his name is Tavi, who is just a digger mongoose doesn’t get the approval of Padma’s father. To be a true mongoose worthy of Padma he needed to be a warrior. There’s a whole history of mongoose from Egypt to Hawaii. In Hawaii they were introduced to take care of the rats on the sugar cane plantations but it didn’t work as rats are nocturnal (night-active) and mongooses are diurnal (day-active) so they went after turtles, birds, and eggs. They’re basically known for their ability to handle serpents and were known in Mesopotamian and Egyptian history as sacred and even are seen held by Buddhist and Hindu gods of wealth. After a storm he is found by a boy whose name is Teddy, doesn’t remember who he is, what he is, or where he’s from and starts a new life in Teddy’s home. With the help of a cat – Khan – and an outside bird – Darzee – he grows fond of the human family that helped him recover. There’s a war, peace is restored in the garden, the mongooses and the human family find harmony, and Rikki-Tikki Tavi becomes an honorable, full-fledged Mongoose! (Yay!)

This is all a sloppy sum up. The artwork is simple, but beautifully delivered and the story is top notch for ages 7+. This graphic novel consists of adventure, conflict and solution, humour, redemption, and love. The copy (which you can purchase on Karate Petshop’s site) also includes the Rikki-Tikki-Tavi short story at the end!! This may be a very mellow comic for many but for those who want to enjoy a concise, light-hearted tale then this is what Sandy gives 4 out of 5 sand dollars.

Stephanie “Sandy” Sandmeier is a smorgasbord of things from cosplayer to reality tv actress to gamer to writer. She has dedicated most of her life to music and fashion for Lolita Dark, dolldelight, and fashion show coordinator for conventions including Ninja-Con, Long Beach Comic Con, and Nerdbot’s very own Anime Pasadena. She’s been seen on My Strange Addictions, I’m Asian American And… A Living Doll, The Doll Life, and very rarely she comes out of hiding for Nerdbot’s Nerd Knights as your sarcastic front desk friend. When she’s not running around conventions she is usually writing, karaoke-ing, or Funko pop hunting. She would like to mention she loves Harry Potter, Disney, DC, and her two fur-babies Domino and Marble.