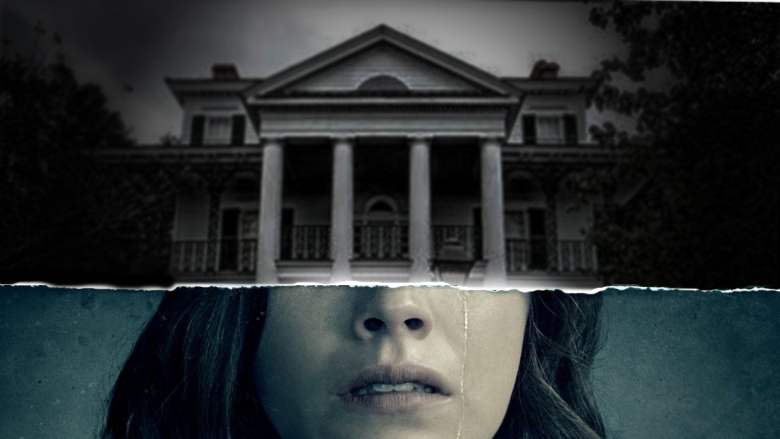 Being a former caretaker at Disneyland’s Haunted Mansion, I was privy to a lot of secrets to the house that I love. Lifting the veil and seeing how the house worked fascinated me and made being a cast member there, to die for.

However, there are stories there that still haunt me now. I guess in a way, the ghosts did follow me home. But they never left…

The following stories are true accounts of what happened to me 14 years ago at The Haunted Mansion.

A month after my hiring, I found myself at The Haunted Mansion. For those that don’t know the process, if you choose to work ‘Attractions’ at Disneyland, you don’t get to choose which one.
It really is a where ever the operations are in need of people, they’ll pipe you there. My whole ‘class’ was going to Tomorrowland Attractions, yet I’m the sole person going to Mansion. Cinderella moment.

After the initial training, I was signed off to close and open. Incidentally, the night I got signed off, I had to do my first closing shift. The process was fairly straightforward: wait till the last guest is out, close the gate, grab a flashlight and trash picker, walk the house.

Being the new guy, my leaders were keen on making me walk the grounds by myself as they did paperwork back at base. To establish the distance and the scope of the entire Mansion, refer to the blueprint here. 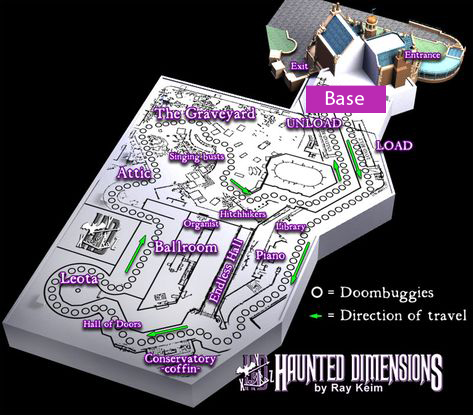 So there is quite a bit of walking. But I didn’t care since this was my first time walking the hallowed grounds of the Haunted Mansion after training. It filled me with excitement and anxiousness because while the idea thrilled me, I still had to do my job.

I grabbed the checklist of things to look for as well as my supplies and I was ready to go until my lead pulled me aside. “We need you to check out the Ballroom. Maintenance said one of the light was going out but didn’t say which one. You know how to get there?” he asked. I nodded and turned on the lights to the attraction. ‘Lights’ is a soft term here because it didn’t really light anything in my path, hence the flashlight.

The lights from above the attraction were devoured by the dark wallpaper and black doombuggies. Visibility was about 20% brighter than what you see when you’re on the attraction. It was dark enough where if I made a wrong step, I would plummet to where the gears were.

Its worth mentioning that during this time, the Mansion had the ‘Nightmare Before Christmas’ overlay on it. So some areas were glowing neon colors due to black light, especially the load area. The audio and animation were off, so it was just the stillness of the air plus glowing outlines of the characters.

I made my way around, successfully reaching the Ballroom area. I walked in from the library and down the steps to where the dining table is. The air smelled like gingerbread since there was a huge decoration planted in the dead center of the table. I scanned around with my flashlight to look for the out bulb. 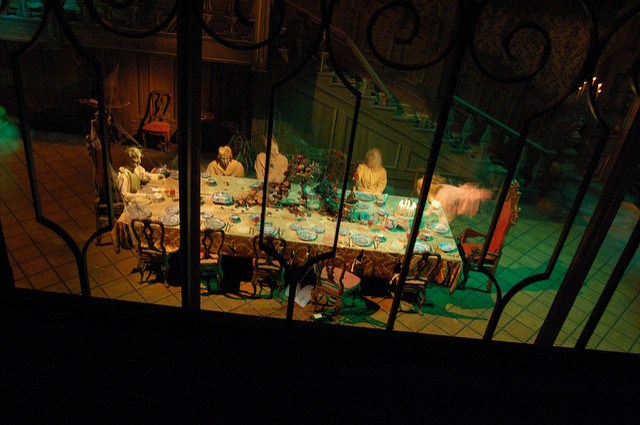 Incredibly haunting looking at the Ballroom mannequins when they’re not moving. Breaking the magic a bit here, there is a process called the Pepper’s Ghost effect. It’s the illusion of using mirrors and lights to simulate a ghost effect. Kind of a like a hologram. If you’ve ever been on Mansion, you know what I’m talking about.

So there I was, standing in a room full of mannequins. The only thing separating us is a sheet of glass pane. I panned left and right, didn’t see anything till I noticed something out the corner of my eye. I shined the light briefly towards the direction and saw a figure in a red hoodie, facing the corner.

It was bent at the knee slightly, facing away from me, tucked in a corner.

I kept panning since I thought it was part of the decor until I looked again and it wasn’t there anymore.

Officially freaked out, I decided to exit immediately and finish my rounds. When I finally got back to base, my leads were asking if there were anything to report. I answered, “Didn’t find any broken bulb but I think maintenance was in there.”

Both leads looked at each other and asked “What maintenance?”
“The guy in the red hoodie. I think he was fixing the light you were talking about.” I replied casually.

“What the hell is a Timmy?!” I said as a chill went down my spine. “Nothing to worry about, it’s just our resident ghost.” my lead said, going back to his paperwork. I jumped back and shouted, “THIS PLACE IS ACTUALLY HAUNTED?!”

They just laughed it off and carried on like I didn’t just say that.

If you don’t know who or what a ‘Timmy’ is, its the long-fabled ghost of the Mansion. His backstory changes slightly depending on which cast member you hear it from. The gist is that his mom spread his ashes in the attraction back in the 90s. Wanting to be a part of the attraction forever type of deal. By the way, this isn’t uncommon. According to the Wall Street Journal, IT HAPPENS ONCE. A. MONTH.

It’s one thing if you see something paranormal by yourself, but it’s another when someone else sees it with you. The 2nd incident that happened to me was when a co-worker and I were waiting for guests to arrive from the Stretch Room at the loading dock. There is a conveyor belt that we walk on when loading guests and it usually is staffed with 2 cast members. 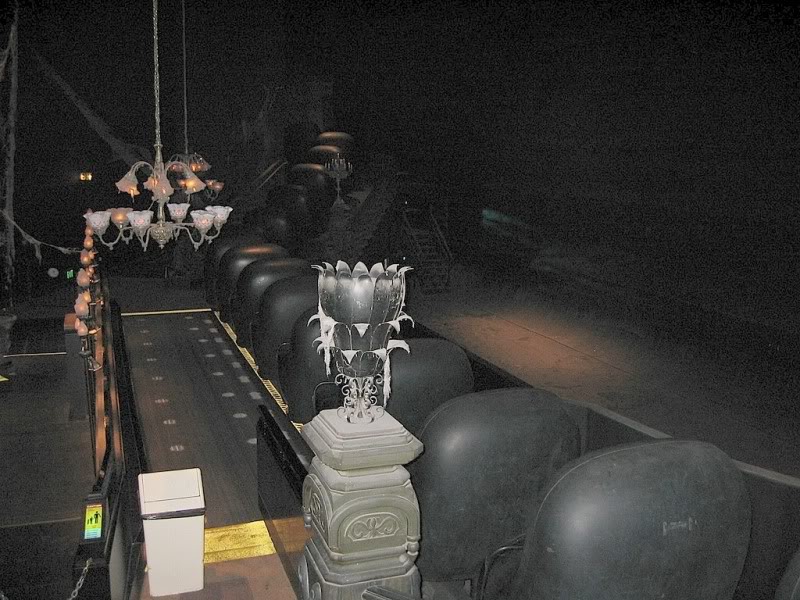 While we were waiting, chatting about nothing, we saw a piece of candy wrapper waft out of a doom buggy. We glanced at each other in a “did you see that?” moment. The wrapper then danced around a bit on the conveyor belt like invisible strings were pulling it. Mind you the belt was still carrying this dancing wrapper towards us as we just watched it.

It finally stopped moving as it laid dead in its tracks at our feet. “Did uh, did you…” I finally said after a long pause. “Yeah. That was weird,” she replied.

I walked over to inspect the area for wind or any kind of explanation. There was none. No wind, no gust of anything that would’ve prompted what we saw to happen.

Later when I recounted the tale to my other CM’s, they noted that buggy 92 is the “haunted” one since that was supposedly where remnants of Timmy’s ashes were. Makes sense, looking back. Kids do like candy…

With the regular Mansion decor in place, the setting was ready for the 50th Diamond Celebration. I had a closing shift that lasted till midnight thirty. Again, I had the Load position, staring down the hallway that was soon to be filled with park goers. 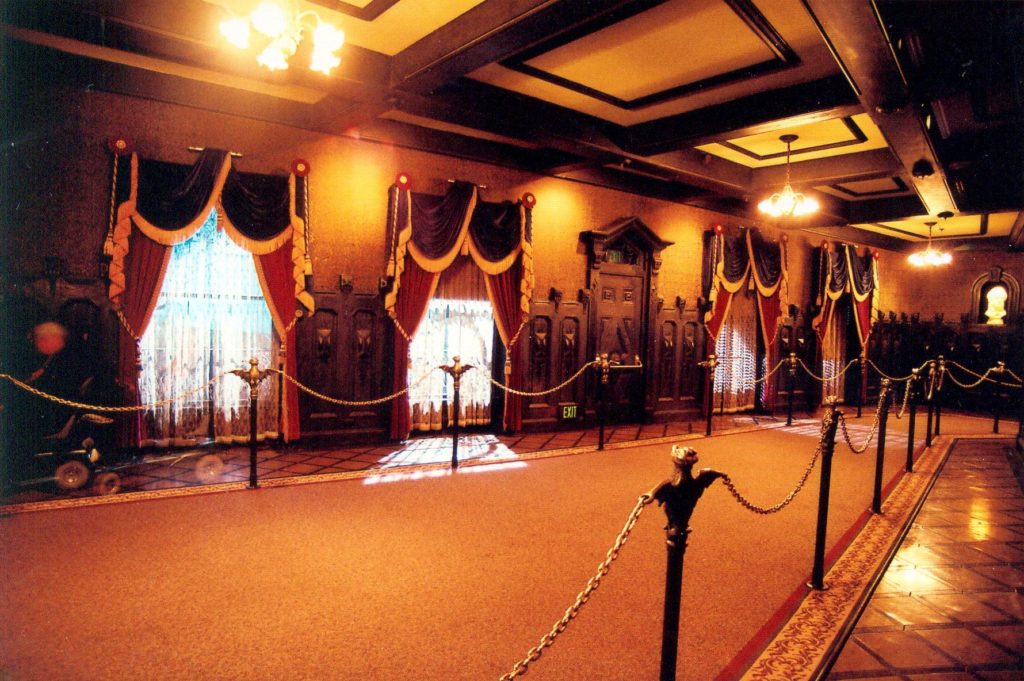 You see that far right window there? The one next to the bust? That’s the one we’re gonna focus on for this final story.

I had a clear view of it down by the loading dock. It would flash on and off as lightning would. Now by this time, we were loading the last family since the park was closed. So I waited patiently for the guests to come till I saw a pair of glowing red eyes peeking through the blinds.

At first, I thought nothing since it’s probably decor or lasers or something. I paced up and down the hallway since I was tired from the day and just wanted to get home. I looked again in the window, still there. Glowing red eyes.

Its shape wasn’t that of humans NOR was it the height.

I decided to take a closer look since I waved my hands at it in some attempt to see if it was lasers. As I got closer, it disappeared from behind the window. Just the regular lightning effect. When I got back to my position, I saw it reappear. Something made me feel really uneasy then. It just didn’t look normal.

The guests arrived and I did my job of loading the people on, called to base to let them know everyone was boarded. I glanced one more time down the hallway to see if I was imagining… I wasn’t. It was still there. Glaring at me.

I felt fear when I didn’t have a reason to.

Got out of there and said NOPE to closing shifts after that.

Oddly enough, if you go to the Mansion now, all the window blinds are open in the hallway.