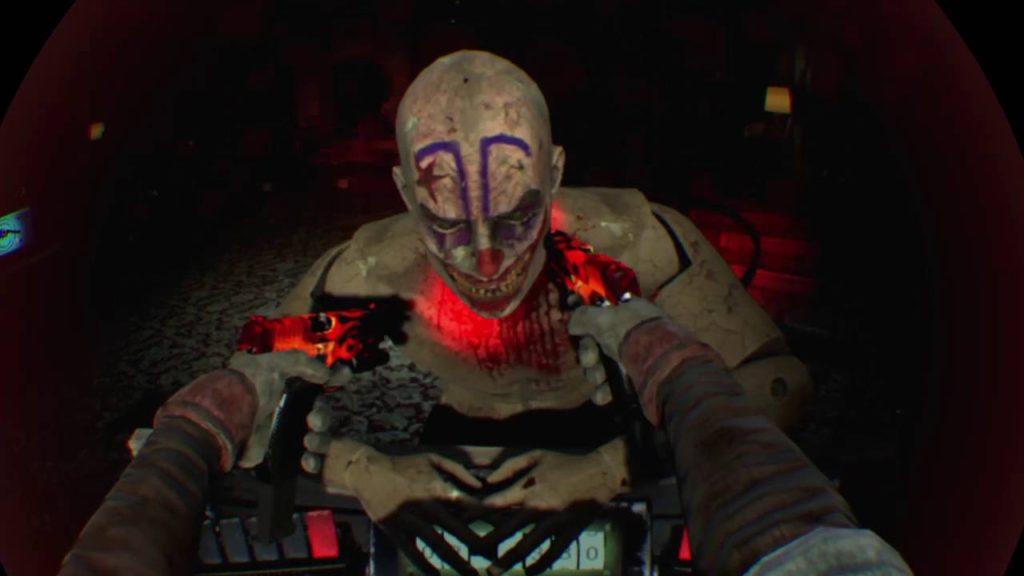 This is a “Nerd Voices” contributing piece from Nerdbot reader Chris McAuley. You can find more from him on his comic book blog or on Facebook!

I was swallowed by a demonic looking door, its large painted clownface like something from my deepest nightmares.  The rollercoaster cart was swallowed whole as I descended at a ferocious speed into the darkness, all the while cackling laughter filled my ears.  Rush of Blood is a powerful VR experience which brings some of the most potent jump scares and atmospheric tension straight into your room.

It’s true that VR is very much in it’s infancy and we are awaiting a title which delivers a stand out experience.  Something monumental in the same manner that Pong was for the first generation of gamers.  However what VR does deliver is a series of familiar tropes which are done incredibly well.  This is spin off title of the PS4 horror game Until Dawn a series which has received critical acclaim and has a solid fan base.  Supermassive games have capitalised on this by creating a solid on-rails shooting experience which some seriously unsettling moments. 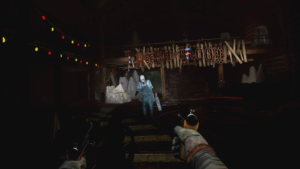 Most VR games have a problem with fluid movement control, with Rush for Blood setting you in a rollercoaster cart, it seems more fluid and is an excellent design choice. It’s also a novel and exciting setting to place a horror game.  It’s more terrifying because you are literally strapped in for the experience. With the cart setting your pace, you are free to focus your attention on shooting the various monsters that shamble towards you from the darkness. Shooting at multiple targets with your PSVR controllers feels badass and really fits the medium.

Super massive games have also injected some incredible experimental 3D audio into this experience. The Jump scares are made even more effective through use of this technique and on more than one occasion my blood truly ran cold.  The audio also does a fantastic job at telegraphing where threats are coming from to enable you to anticipate and quickly swing your shooters around just in the nick of time. 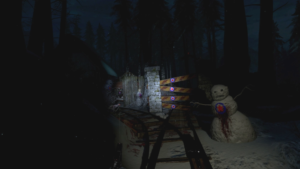 Rush of Blood is loosely related to the original Until Dawn, but not so much that newcomers will feel like they’re missing out. It features some imagery and characters from the previous game in disturbing tableaux and brief cutscenes between levels, but deployed in a way that feels impressionistic and fragmentary, like a nightmare. Recurring motifs like a young weeping woman and the plaintive cry of an unseen infant give the sense that there is a psychological substrate to the otherwise somewhat stock horror imagery, but not such that it is confusing or distracting.

The moment-to-moment sights and sounds in Rush of Blood are all well-executed, but far from imaginative. The seven levels cover standard horror locales like a creepy carnival and an abandoned asylum, populated with all manner of zombies, clowns, and giant spiders. It’s nothing we haven’t seen a thousand times before in conventional horror games, with no twists that might subvert our expectations. 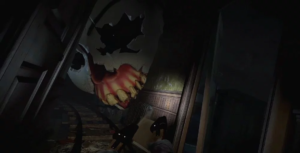 Even rote horror imagery, however, can be effective in virtual reality. Rush of Blood takes full advantage of the medium’s visceral immediacy, which compels a reaction to jump scares that horror fans might normally shrug off. There’s a level full of giant spiders that we found particularly unsettling.

This is an excellent experience and one I highly recommend for horror lovers this Halloween season.