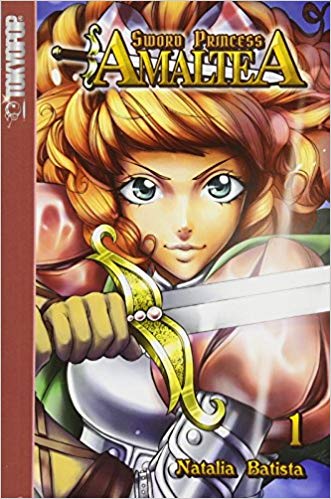 Nerdbot would like to thank Tokyo Pop for providing us with a review copy of ‘Sword Princess Amaltea’ Vol. 1 by Natalia Batista.

I was completely sold by the cover and title of ‘Sword Princess Amaltea’ alone. The tough young woman with the challenging, Utena-esque gaze really did me correct and I was very eager to dive face first right into the story. Which, if I may add, is written and drawn by a Swedish female manga artist. I’ll reiterate that I love the push that Tokyo Pop has on female artists who are not solely from Japan. It’s really a spectacular movement.

We all know the way the story goes. The valiant prince goes on a perilous journey, kills a ferocious dragon, rescues a captive princess, earns his family’s honor. But what if this time the prince…was a princess?

In a fairy tale world where queens rule and magic is power, Princess Amaltea is sent on the biggest quest of her life — to rescue a prince in need and fulfill her duties as a princess. Spoiled, prejudiced and sheltered from the world at large, Amaltea reluctantly sets out on her journey and finds her “lad in distress”…only to find out he’s not so willing to join her.

Thus, we have a world, setting, and a hook. Now, we’re ready to begin our adventure.

The joke in this world is this: if you flip the script on male and female gender roles, what sort of world will you create? Well– a pretty basic one, if you ask me. Yes, gender roles are swapped, but the behavior of those in control of their new roles remains exactly the same. Girls act like boys, and boys act like girls. Therefore, you have the same behaviors simply assigned to a new sex. There isn’t much revolutionary happening.

What’s interesting to note is physical gender roles. Everyone sort of presents female, save for Princec Ossian, who has short hair (which we all know is a traditionally male gendered trait). But Amaltea herself, the queen, and the older sister Dorotea are all quite fancy in a westernized cis-female gender sort of way.

There’s a male barmaid who is hyper feminine, to the point where he reminds me of a Japanese Onnagata (men who played women’s roles in theater). I like him because he’s sassy and uses his body to trick the horny women in this world before robbing them, but again, it’s a familiar idea; he’s doing what women do by using his body to get what he wants. Another unfortunate familiar storytelling resort here is that the women clearly rape the men. There are many drawings of Ossian looking scared and gasping “Oh no, not again”, and something about this doesn’t sit well with me. Just like it’s weak storytelling in media when a woman’s tragedy (or means of finding her inner strength) happens because her body was compromised and her agency removed, the same goes here in our “gender swap” fairy tale universe. On the topic of Ossian making certain faces, I want to talk about the artwork for a little bit. Truly, the art in ‘Sword Princess Amaltea’ is inconsistent. You have these spectacular money shots and glamour, but then there are just these upsetting flat angles where the characters seem to morph. It’s very odd and it definitely doesn’t stay pretty.

Overall, it’s an entertaining story. A spoiled young person will come of age on an adventure she never chose to go on. Two people with seemingly nothing in common other than lineage and roles they need to fill will learn to become friends of sorts. And maybe even more. And while I was really hopeful for a more serious story, this quirky tale still intrigued me enough that I’m curious to see what happens in this story and where these characters will end up.

6 Pop Culture Fads (That Have Faded Away)