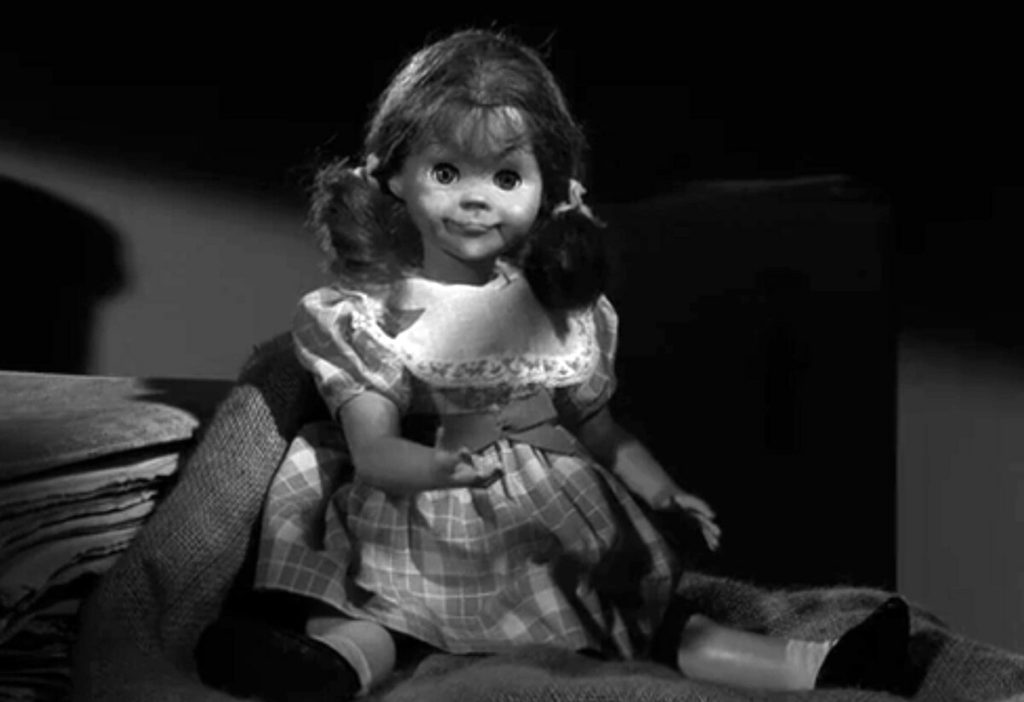 The Twilight Zone is my favorite television program of all time. Running from 1959 to 1964, Rod Serling entered the viewers living room every week with a new tale offering a glimpse into the human psyche.

Terror or horror doesn’t necessarily have to be blood and guts, or shock and gore. Mood, atmosphere and what lies within our subconscious can be just as frightening. John Carpenter once said, there are two basic tales for horror. The monster dwelling out there in the darkness, and the monster found within, and Rod Serling along with a plethora of talented writers, producers and directors brought these tales to the forefront.

The episodes within this article will be as spoiler free as possible for those who have never watched the show, because their respective reveals are worth watching unfold naturally. With Jordan Peele’s revival of the show currently in production, and this being the Halloween season, let’s look at fourteen of my favorite spooky stories that can be found…in The Twilight Zone. 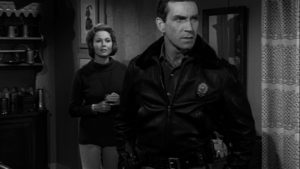 The penultimate episode of the series, The Fear finds Highway Patrolman Robert Franklin and fashion editor Charlotte Scott trapped in a remote cabin over the course of a terrifying evening.

Where are these mysterious lights coming from amongst the darkness of the forest, and who or what is the cause of the strange sounds emanating from the rooftop? Morning soon arrives, and our protagonists discover that there truly are times when the only thing to fear is fear itself. 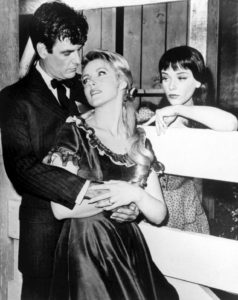 Season four switched from a half hour format to a full hour, but only for the fourth season. However, the extra runtime gives this episode the proper amount of time it needs to unfold.

Jess-Belle makes a deal with a suspected witch in the Blue Ridge mountains of the Appalachian territory to win back the love of her ex Billy-Ben Turner, but there’s a price to pay for dabbling in witchcraft, for all parties involved, including Jess-Belle most of all. 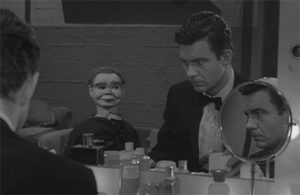 Does anyone else think that ventriloquist dummies are creepy? If you didn’t before, you should after watching this episode.

Jerry Etherson; portrayed by Cliff Robertson who may be better known as Uncle Ben in 2002’s Spiderman, is a ventriloquist trying to catch his big break and aspires to go to Kansas City, but desperately wants to get away from his ventriloquist dummy Willie, who Jerry is convinced is real, but to all others is just a wooden caricature.

Is Willie real, or is he only real at the bottom of the bottle Jerry empties every night? What happens when the voice that’s being thrown is thrown in the other direction, taunting him, and what happens to Jerry if art really does decide to imitate life? 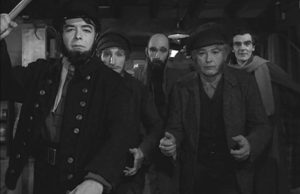 We’ve all heard the expression, “don’t take your work home with you”.

However, when Martin Senescu takes the “Murderer’s Row” exhibit of figures from the soon to be torn down wax museum that employed him into his home, he quickly becomes obsessed with his new wax companions to the point that he believes them to be real and will do whatever it takes to keep them safe, no matter who gets in his or their way, descending further and further into madness as he goes. 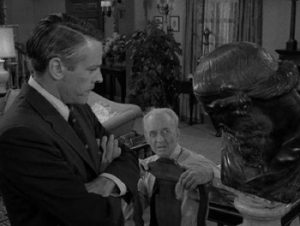 Walter Jameson is a respected college professor, but when he asks for the hand of a fellow professor’s daughter in marriage, his colleague is hesitant and suspicious, because in the twelve years Sam Kittridge has known him, Walter hasn’t aged a day.

One of Walter’s much older ex-wives appears and reveals the long-hidden secret behind Walter’s inability to age, before delivering a fatal physical blow. Sam’s daughter Susanna is left with questions that for her, are best left unanswered and her engagement to Walter is reduced to dust. Literally. 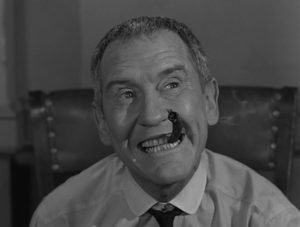 There are several Twilight Zone episodes that deal with the devil (see what I did there?), and I almost went with season one’s Escape Clause, however being an enormous Burgess Meredith fanboy, I went instead with Printer’s Devil from season four.

When a large newspaper conglomerate moves into town, small time editor Douglas Winter feels down on his luck, and sees only one very desperate way out, until a mysterious Mr. Smith appears and gives him an offer that seems too good to be true but leads Douglas down a path to a fate almost worse than death.

Burgess Meredith with a gleam in his eye, and an ever-present crooked cigar turns in a truly devilish performance, making the devious Mr. Smith almost likeable. But, who is the devil if not persuasive? 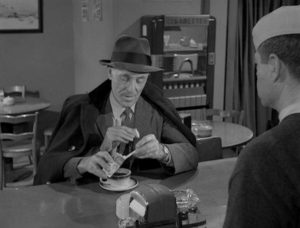 And put one of those fingers on each hand up.

Six strangers on a bus take refuge from a snowstorm at a nearby diner, or was it seven? The driver can’t be sure, but once a pair of state troopers show up and begin questioning the patrons of the diner if they have any information about a UFO that was reported to have crashed nearby, tension begins to mount.

No one within the confines of the diner can agree on who the mysterious seventh member of their party is, nor can they agree which of them is human and which of them may not be what they seem. 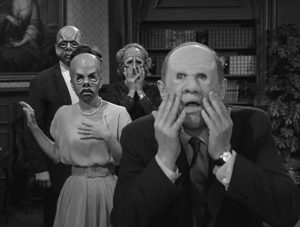 Jason Foster has only hours to live, and his children are all too eager to inherit his fortune. Each of his four children has a less than desirable quality, and their father shines a spotlight on these qualities with the aid of special masks, which he instructs the four of them to wear until midnight on the eve of Mardi Gras, if they wish to inherit the money.

The masks are a representation of each of their personalities, yet terror reigns when at the stroke of midnight, the masks cannot be removed and the four hopeful heirs are cursed to live out the rest of their lives with their shame on full display. 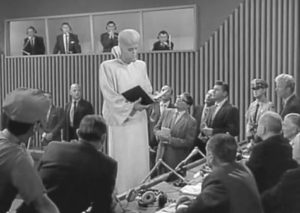 When a race of 9-foot-tall aliens known as Kanamits come to Earth and wish to aid us with their advanced technology, how can we possibly say no.

Should we trust them, however? Trust comes with a price, and throughout To Serve Man that trust is eroded when a human discovers the aliens wish to have us as very special dinner guests.

Watch out for snakes! 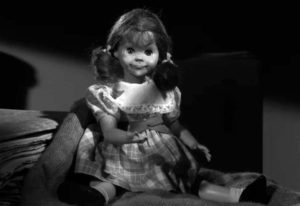 They share a home with a man who cannot have children of his own and is bitter because of this.

Annabelle persuades her husband to try and love her daughter Christie, because she loves him.

But, Talky Tina is a haunted doll who recognizes Telly Savalas character for who he truly is and tells him in no uncertain terms, “my name is Talky Tina, and I’m going to kill you!”

Free of potassium benzoate (that’s bad), Living Doll is one of the more famous Twilight Zone episodes when a possessed doll takes the families surrogate father to his breaking point and was parodied years later in the Clown Without Pity segment of Treehouse of Horror 3, as well was partly an inspiration for Chucky and the first Child’s Play. 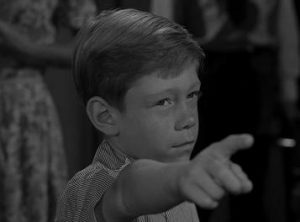 Speaking of the Simpsons, fans of that show will recognize the scene within It’s a Good Life when a young boy named Anthony transforms one of the adults into a jack-in-the-box, as this was played up to humorous effect when Bart did it to Homer.

It’s a Good Life however is the opposite of funny. The inhabitants of a small Ohio town are forced to remain happy, always think good thoughts, and be forever grateful for having young Anthony in their life; otherwise with the point of a finger they are cast into the oblivion simply referred to as the “cornfield”. 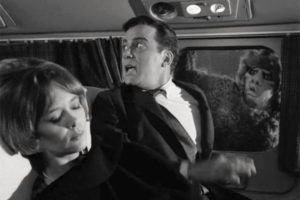 Nightmare is a little more on the goofy side than it is terrifying, look no further than the star of the episode William Shatner.

However, Shatner turns in a solid performance as only he can, of a man who is recovering from previous nervous breakdowns just to have it all unravel for him again aboard an evening flight, when a gremlin that only he can see wreaks havoc on the aircraft, with Shatner’s pleas for help falling on deaf ears.

The reveal of the gremlin today will illicit more laughs than gasps, but this super fun episode is still a classic for several reasons and is always worth a watch. 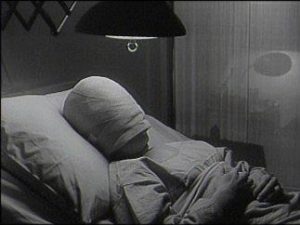 This second season episode asks what it means to be “normal”. Janet Tyler lays in a hospital bed her face shrouded in bandages after undergoing her eleventh surgical procedure, only to overhear the doctors describing her face as a “pitiful, twisted lump of flesh”.

Desperate to see what lies beneath, Janet convinces the doctors and nurses to remove the bandages, much to their horror and disgust. A man similar in appearance to Janet arrives to escort her away to a village of “their own kind”, since there is no possible way she can or will be able to conform to the standards of beauty in her current community. 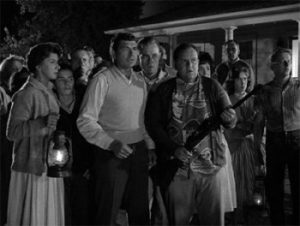 The Monsters are Due on Maple Street may very well be the best known and most revered episode of the Twilight Zone and is a true “monster within” tale that John Carpenter was referring to.

When a UFO is apparently seen flying over the neighborhood of a small town, and all electricity within the town is affected, tensions mount and distrust amongst the townsfolk quickly and violently bubbles to the surface. The true horror comes however in how quickly we as a species and as a society are to turn on each other when the fear of the unknown looms largest.