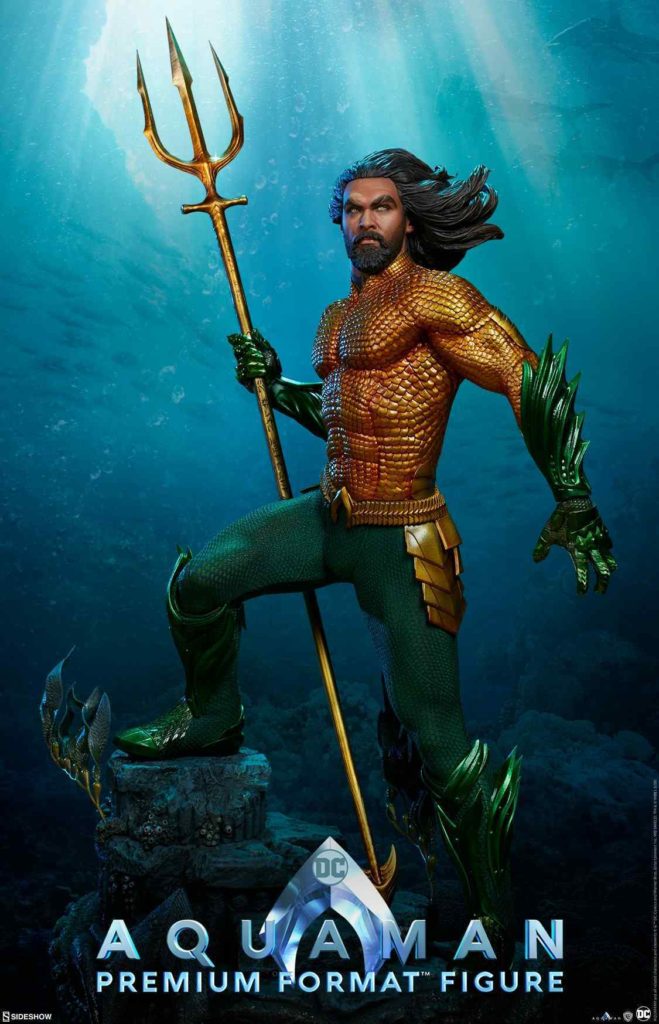 Sideshow Collectibles has revealed the first look at it’s Aquaman premium format figure based on Jason Momoa’s appearance as Arthur Curry in the upcoming film.

The figure shows Momoa’s Aquaman in the film’s version of the classic Aquaman costume from the DC Comics Universe. The costume takes Aquaman’s signature gold and green color scheme and spreads it over a suit of scale mail armor. 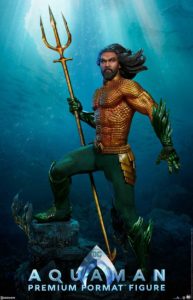 Momoa’s classic costume was first revealed in the Aquaman movie trailer released at New York Comic Con. While there was plenty to unpack from that trailer – including the first shots of Black Manta and his troops in action, the first full look at the Trench, and the first look at Dolph Lundgren in the film – but director James Wan says the trailer only reveals the tip of Aquaman’s iceberg.

“Trailers contain spoilers by nature, Wan said. “So if you don’t want anything spoilt, don’t see it. But I can say this – this 5-min trailer barely scratches the surface of the actual movie.”

Speaking to ComicBook.com, Wan said that it is important this film has its own identity rather than allow him to be swept away by the larger DC Extended Universe.

“It was very important for me early on to be allowed to make my own film and to have my own voice be in there,” Wan said. “After Furious 7 and Conjuring 2, I didn’t want to be a director for hire. After Furious 7, that’s kind of who I was to some degree, but after that, I don’t want to be that guy again. So, it was very important for me to be able to bring my own stamp, my own visual aesthetic, create the characters. Even though Jason has somewhat been established Justice League, I wanted to bring his character into this, basically, fresh in a lot of ways.”

That said, Wan isn’t going to forget what Zack Snyder established about Aquaman in Justice League.

“I really think what has been really fun, and I think for moviegoers, not just the fans, is when they see this film, they’re not just seeing a world of DC. They’re literally seeing a world within Aquamanitself,” Wan said. ”Just within the world of Aquaman, just creating the different kingdoms, like the different world, the machines that drive the world. They transport the animals that live in this underwater world and all that stuff. So I’ve never made a movie that is so heavily designed to this extent, and it was really awesome just being able to come up with really interesting things, and just run with it. And when the film comes out, I think you’re going to see how crazy big it is.”

What do you think of Sideshow’s Aquaman premium format figure? Let us know in the comments!