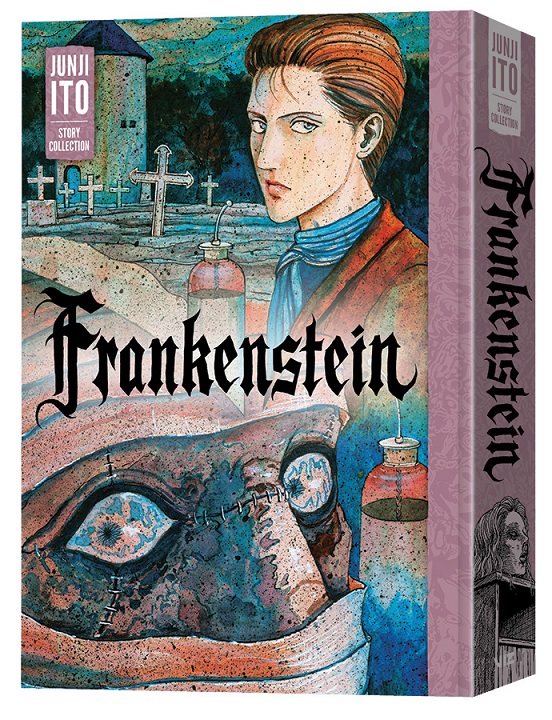 Nerdbot would like to thank Viz Media for providing us with a review copy of Frankenstein by Junji Ito.

Happy Halloween month, ghosts and ghouls! I am so excited that in addition to all of the amazing ghastly and spooky Halloween-related content we have on Nerdbot this month, that we’re able to include horror manga on the list, courtesy of Viz Media! The kind people over at Viz provided Nerdbot with a copy of Junji Ito’s Frankenstein and I knew this was a book I not only wanted to take down hard and quick with a vengeance, but really make sure I wrote up during the very start of the Halloween season.

Junji Ito has a massive following, and he is more or less known as the master of horror manga. Which made his elegant and tragic retelling (or adaptation) of Mary Shelley’s Frankenstein so appealing.

I use the term ‘elegant’; Frankenstein is very much a period piece. A ship captain sees a giant on a sled out in the icy fog on his ship with his crew. Moments later, an emaciated Victor Frankenstein, a man who dedicated the rest of his life to chasing the pieced-together reanimated zombie man of his own making, rows up to the ship. The captain pulls him into the ship, lets Frankenstein rest a few days, and upon waking, Frankenstein tells the captain his story.

Summarized, Frankenstein’s mother dies and he leaves for university. He’d always been attracted to philosophy and the odd, but when he learns about reanimation in a science class, he decides to figure out how to piece together a man created by the scraps of several dead people. He creates a huge, lumbering, rotting mess (instead of the ‘perfect person’ he was set on making) and abandons the creature. The creature goes on his own side quest to understand what and why he is, learning to speak in the process. Unfortunately, the creature (while originally wanting to be loved, loving, and kind) becomes violent and full of rage when human after human fears and rejects him.

As told in a flashback to the captain of the ship, Frankenstein and his monster cross paths again. The monster reveals that he murdered Frankenstein’s five year old brother, is clever enough to frame the handmaid who was supervising the child, and then demands that Frankenstein build him a woman so he is not alone. Frankenstein, along with his friend Henry who has discovered his necro-magical-reconstruction (it’s a little unclear what the potion liquid is that he pumps into his creations, but the imagery is typical in the sci-fi horror genre, so we’ll just call it “zombie-wakey-juice”).

Long and short, the woman monster wakes up all freaked out. She’s a grunting screaming mess and Frankenstein’s original monster snaps her neck in like, seconds. Ten hours to bake. Five minutes to eat. I literally cringed for all the effort that took Frankenstein just to have it all unraveled within seconds. After the failed woman attempt, the creature declares he will dedicate the rest of his existence to making Frankenstein as miserable and alone has he is, therefore killing everyone he knows and loves and escaping. Frankenstein chases after the monster he’s created in an endless chase until the moment he is pulled onto that ship. Frankenstein dies and the monster feels the loss of his maker in his bones. He screams in anguish and agony, presumably forever.

While the story is a little flimsy, the artwork is astounding. Junji Ito has the ability to draw some of the gnarliest, more nightmarish creations I’ve ever seen. I can’t believe any of this stuff is in his head. It’s remarkable and grotesque art.

Now, while I’m inclined to give the clear novella/star of the show Frankenstein here a 3.5 out of 5 stars, we need to remember that there’s about eight short stories left in this beautifully bound hardcover book. There are six stories about a high school boy named Toru Oshikiri, a terrifying Twilight Zone style tale that are very loosely tied together. The first Oshikiri story, ‘Neck Spector’ is without exaggeration one of the most terrifying illustrated stories I’ve ever read in my life, short of those amazingly hideous Scary Stories to Tell in the Dark illustrations. As the Oshikiri stories continue, they tie tighter and tighter together until they begin referencing each other. I could read those all day.

The last two stories was an unsettling story about a woman bound to a chair via metal spikes in her ears, and a couple whose daughter transforms into a calcified doll. Incredible illustrations, terrifying premises, unsettling notions, and something that just pulls unease right from your bones.

I didn’t read the last two stories about the dog.

I give Frankenstein by Junji Ito 5/5 stars if you want to experience some truly good manga scares. 4/5 for overall storytelling.