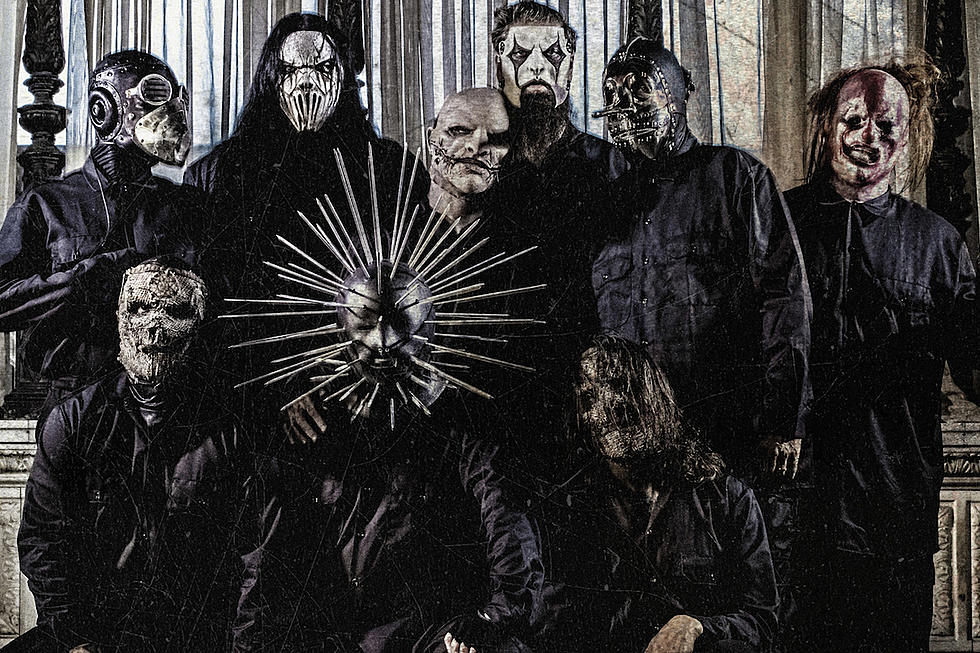 Everyday is Halloween (For These 10 Heavy Metal Acts)

What better time than Halloween to put on a mask and become another person, to assume an identity different than your own, an alter ego.

Here at Nerdbot we love music, heavy metal especially, and today we have 10 examples where the music and the macabre came together. Ten artists who treat everyday as if it were Halloween, and step behind the veil and project a persona towards their audience.

We all wear masks…metaphorically speaking.

You think this is a costume? This is a way of life! We were going to launch this countdown by saying “Bro, Slipknot, duh,” but we thought these late 90s answer metal gods deserved more love. While Thrash was still going strong and Nu-Metal was just starting to surface from the ashes, Slipknot brought a harder sound than their Korn and Tool contemporaries. Their hit song Wait and Bleed was the first to come to my attention when it was all over the radio. But when that music video hit, it was over. Those costumes…those masks…is that Pinhead in the above picture?! Slipknot launched a look and sound that perfectly embodied spooky culture and they’re still going strong, saying they’ll likely play again after they release another album. You may think their look resembles Billy Butcherson from Hocus Pocus, but Ghost has a look and sound that’s all their own. Somewhat doom metal and another part Nine Inch Nails, these guys have solidified their place in the spooky metal genre. Ghost is somewhat fresh on the scene compared to other bands. They formed in 2006 and released a three track EP in 2010. As of 2018, they’ve only released their third studio album. With that said, when it comes to them lurking around the Halloween field, there’s plenty of dark opportunities for them and their exciting state shows.

Yes, we discussed German power metal band in our last music countdown about bands that brought out our inner fantasy nerd. But now, we’re talking about aesthetics and tone. With spooky songs about the dark, the night, and religion, Powerwolf has a sound that’s ready for any Halloween countdown. And when Demons Are A Girl’s Best Friend from their newest 2018 album The Sacrament of Sin dropped into our ear holes and made us think of haunted houses and boo-clowns, we knew there was no way we could make a Halloween Metal countdown without giving Powerwolf some more love! 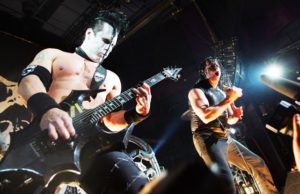 The forefathers of horror punk, The Misfits stormed the New York club scene in the 70’s with a relentless, driving punk rock sound with horror and science fiction themes and imagery mixed in with their music. Songs like Vampira, I Turned into a Martian and Night of the Living Dead being prime examples.

Bassist Jerry Only created what would become known as the devilock hairstyle, a long strip of hair extending from the forehead to the chin that would be copied by generations of fans, and the bands fiend skull logo is as iconic as they come.

Frontman Glenn Danzig would depart from the band to form Samhain and then the solo group that bore his name, while the Misfits would continue to soldier on and by the 90’s had transitioned from punk to more of a heavy metal/hardcore style and began incorporating more corpse paint as part of their stage act.

Danzig by this time had also experienced success with the single Mother and continued to release songs that included gothic imagery and evoked thoughts of All Hallows Eve sung in that booming baritone of his, whether it be Twist of Cain, How the Gods Kill or Left Hand Black, and today is the owner of the adult themed comic label Verotik.

Danzig and the Misfits have reunited a handful of times and while they may not pass as Teenagers from Mars these days, they continue to Walk Among Us. 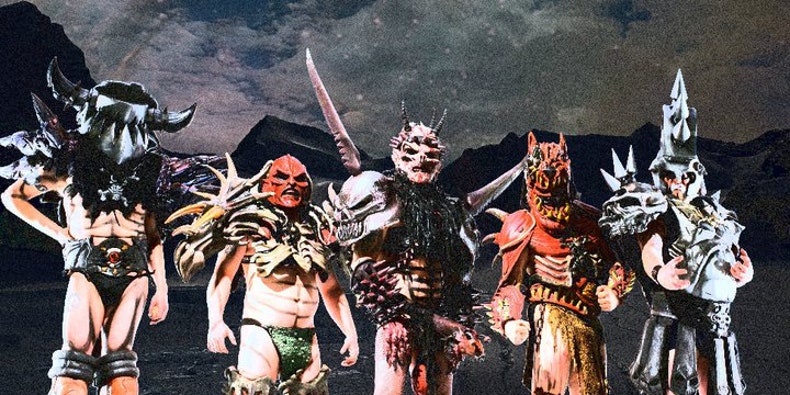 “Marge, I’m confused. Is this a happy ending or a sad ending?” “It’s an ending, that’s enough!”

Is attending a GWAR show a happy experience, or a confusing, revolting, maddening experience?

It’s an experience, and that’s enough.

If you’ve never seen GWAR live, you should do yourself the favor and go at least once if you have the chance. What’s being doused in fake blood, urine and semen if not the recipe for a good time, right?!

Formed in the mid 80’s, GWAR goes deep into their gimmick, cultivating a science fiction themed mythology about being barbarians from another planet, covered head to toe in outrageously grandiose costumes and with names like Beefcake the Mighty, Balsac the Jaws of Death and Oderus Urungus along with the aforementioned bodily fluids being shot into the crowd and a controversial stage show that doesn’t shy away from over the top violence, parody and sex, GWAR is impossible to ignore. 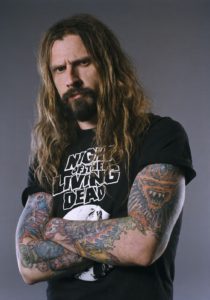 While I’ve never been the biggest Rob Zombie fan overall, I’ve always appreciated his love and admiration for the horror genre whether it be in his music videos like Dragula (how can you not bob your head along during the song) or Living Dead Girl which draws heavy inspiration from the classic German expressionist film The Cabinet of Dr. Caligari.

Rob Zombie has also directed several unique horror films, The Devils Rejects standing out for me as his personal best. His Halloween films are a story for another day, (a million f-bombs do not necessarily a good horror film make) but you can’t fault him for trying to think outside of the box.

Being a huge KISS fan and a card-carrying member of the KISS Army as well as being drawn to Alice Cooper and his various costumes at an early age, Zombie certainly puts on a show that revels in the spectacle that can only come from being inspired by the hottest band in the world along with his lifelong Alice Cooper and horror movie fandom. 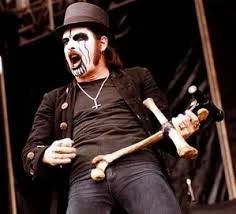 Kim Petersen may not be a name that stands out to you, but when he dons the makeup, and hits that high falsetto under his alter ego of King Diamond, you don’t want to be caught breaking the oath, but rather give your full and undivided attention, visually as well as sonically.

Both the frontman for legendary metal act Mercyful Fate as well as his own eponymous band, the King has been serenading fans for over three decades with tales of the macabre and the mystical. Whether it be A Mansion in Darkness, Doomed by the Living Dead or his most famous song Melissa, King Diamond’s albums usually carry with them a story arc throughout and in many cases are considered concept albums about the haunted, the disturbed and the bizarre.

Noted for his ghoulish makeup which he’s had to since alter after catching the eye of KISS’ Gene Simmons for it appearing to be like Gene’s Demon makeup; which is open to debate and personal interpretation, and a mic stand constructed from a femur bone and a tibia bone in the shape of a cross. While I can sometimes find him to be a little too schtick heavy, I’ve dug the music, and it wouldn’t be Halloween without the King. 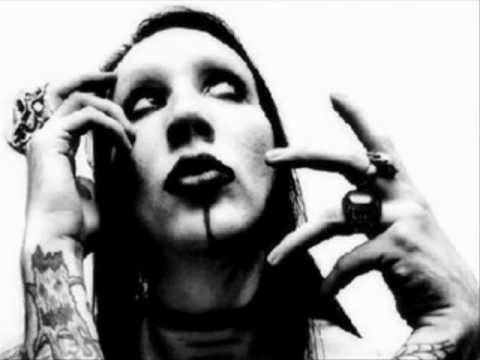 In high school I was deep into the Marilyn Manson fandom as were most teenagers in the 90’s. I had several t-shirts, owned every full-length album and EP I could get my hands on, and will admit to painting my face just like Marilyn’s when he appeared on the cover of Rolling Stone. Thankfully this was pre-Twitter and no such photos exist for me to be embarrassed by.

But hey, I was 16, we’re all impressionable at that age and will try on several masks as we shape and evolve during those formative years.

Originally formed in Florida as Marilyn Manson and the Spooky Kids, the quintet adopted their names as an amalgamation of beauty queens and serial killers. Imitation being the sincerest form of flattery, Manson without question took inspiration from groups like KISS and Alice Cooper as it relates to his stage show with ever evolving iconography, religious themes and if the music won’t hold your attention for the duration of his shows, the strong visuals on stage surely will.

Always the center of controversy, and a lightning rod for parents’ groups and religious activists who try as they might to tear him down, while more figurative than literal, the Halloween season can always use a boogeyman or two to keep us on our toes. 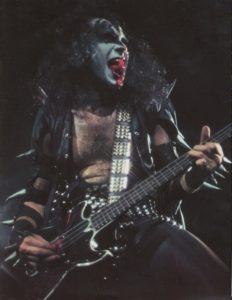 Kids in the 70’s and early 80’s were already members of the KISS Army and without a doubt wanted to dress up as the Spaceman. I’ve done it twice, at age 13 and in my mid 30’s. Once a Rock Soldier, always a Rock Soldier.

Some fans may have wanted to emulate the Starchild, and I’m sure there were a few out there who dug the Catman. I can guarantee there were more Catman costumes come Halloween then there were Ankh warriors. Sorry, Vinnie Vincent.

But if you’ve got to choose which member of KISS to go out as on Halloween, and you want the whole neighborhood watching you, Gene Simmons makes the most sense of all.

An admitted fan of horror films and comic books, Gene would prowl the stage with his battle axe bass, spitting blood, breathing fire and flying above the heads in the crowd like the mighty War Machine that he is.

A list like this wouldn’t be complete without the God of Thunder, in fact it would be considered unholy if the Demon wasn’t included in this rock and roll hell. 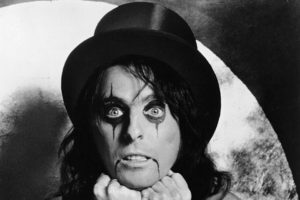 The godfather of shock rock, and horror theatrics, Alice Cooper is still going strong after nearly five decades. Incorporating various vaudevillian aspects into his show, you’ve got Alice being decapitated by a guillotine, riding the lightning in an electric chair, as well as having a giant romping, stomping Frankenstein’s monster patrolling the stage.

Alice is the original and arguably still the best at what he does. He’s hung out with horror icons like Vincent Price, had acting gigs in both John Carpenter’s Prince of Darkness and Freddy’s Dead: The Final Nightmare as Freddy Krueger’s abusive stepfather, been featured on a Friday the 13th soundtrack and will also help you with your golf game and let you know the true meaning behind the name of Milwaukee. Does this guy know how to party, or what?!

Without Alice’s contributions we wouldn’t have KISS, Marilyn Manson or Rob Zombie as we know them today to help continue to carry the torch, and what would Halloween be without a nightmare or two.

Do you have any favorite spooky-rock bands? Any other metal bands in makeup you want to discuss? Tell Nerdbot about it in the comments!