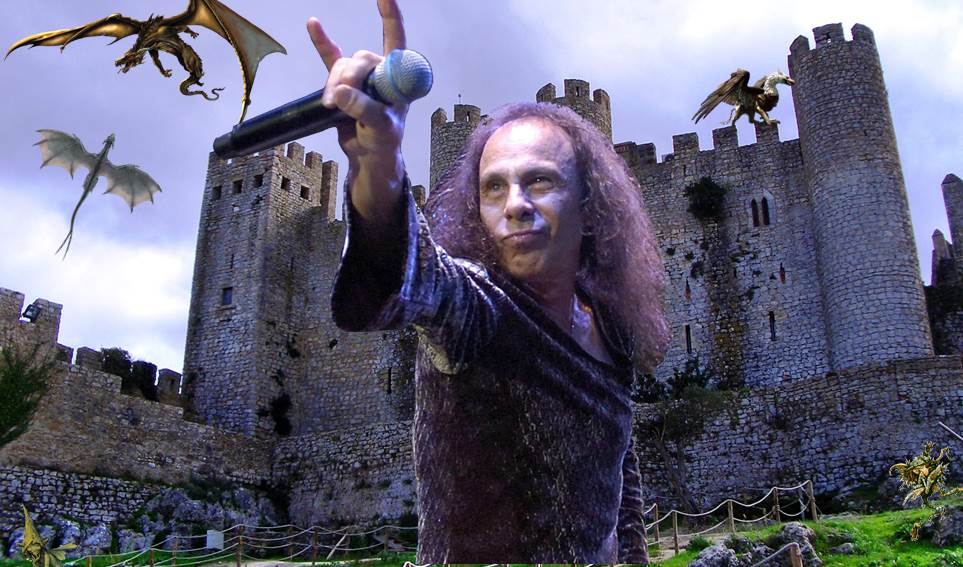 If there’s anything all of us at Nerdbot HQ can agree on, it’s that music is awesome. Especially when we’re rocking out to nerd-inspired bands. From that article we wrote about Simpsons Inspired Bands, down to the one about Video Game Cover Bands, nothing rocks our faces like some bad ass music blasting straight into our ear holes.

But what about when a mainstream band delights our inner nerd? It’s no surprise that many heavy metal bands are nerds in disguise. After all, what are the topics of their songs? That’s right– Dragons and magic, forging steel, sword fighting alongside your brother, the triumph of the warrior, and riding that horse to the depths of VALHALLA!

So today on Nerdbot, we’re counting down our top picks for heavy metal songs that brought out the inner Dungeons and Dragons inspired fantasy warrior in us all! Bring that hammer down and behold the light– because we’re fighting for the glory of the steel!

I’ll go calm myself down over here.

I’ll express my bias right off the bat; HammerFall is the greatest band in the world. Their rockin’ heavy metal sound from Sweden has been owning face since 1997. Dethrone and Defy is a song that makes me feel like a metal warrior. HammerFall is still going strong and currently working on a new album! And guess what- they’re also secret nerds. Their fifth album was called ‘Ch. V: Unbent, Unbowed, Unbroken’, which was the family motto/slogan/trademark of House Martell in the A Song of Ice and Fire books.

Guitarist Oscar Dronjak doesn’t hide the fact that he’s a huge Zelda fan and retro game collector. With songs like “Take The Black”, “Winter Is Coming”, and “Twilight Princess”, HammerFalls are rock gods…and secret nerds like us. And with other songs like ‘Blood Bound’ and “Hero’s Return’, they summon the warrior who fights for glory in us all!

Side note: They also call their recording studio “Castle Black”.

Two of my favorite words combine to form the name of one of the most ass-kicking bands in the world. Glory. And hammer. While the band themselves describe their sound as “Heroic Fantasy Power Metal”, I affectionately refer to this genre as “Glory Metal”. And man, does it tell a story. Much like Gwar, the band has an ongoing narrative:

In the distant future of the year 1992…war has returned to the galaxy. One thousand years have passed since the brave hero Angus McFife defeated the evil sorcerer Zargothrax in the battle of Dunfermline, trapping the wizard in a frozen prison of liquid ice. But now, a cult of unholy chaos wizards are plotting to release their dark master from his ice-bound tomb and once again unleash the sorcerer Zargothrax upon the universe. The tragic destiny of the Galactic Empire of Fife now hangs in the balance once more…

Manowar is one of the granddaddy fantasy metal bands. On their website, they claim themselves to be the first band to sing about magic and sorcerers on the regular. With Manowar, you’re never quite sure which songs are legitimately their thoughts, or which is a concept album. Maybe every album of theirs is a concept album. Founded in New York in 1980, they’ve been leaders in the heavy metal fantasy movement. And the song Sleipnir hits every single fantasy metal warrior lyrics jam-packed into a single song.

Carry we who die in battle

over land and sea.

Across the rainbow bridge to Valhalla

Oden’s waiting for me!

Like seriously; add reference to a sword or warrior, and this would be a flawless victory nerd metal chorus.

7) Dragonforce: Valley of the Damned

When Dragonforce burst onto the scene with their “Because it was on Guitar Hero” hit ‘Through the Fire and the Flames”, there was a moment there where it looked like speed metal was going to hit the mainstream scene. Secret was, anyone who’d been listening to metal already (or had a Sirius Radio subscription in 2006 like me) was already well aware of Dragonforce. With a name as strong as lightning (and a pretty regular look), Dragonforce kept their warrior-nerd status on the down-low. That is, unless you’re smart and your favorite song by them is ‘Valley of the Damned’. A beautiful song about a warrior wielding his sword on a dark winter night and saving the world. Full of sensory details, it transports the listener into a fantasy realm of heroism and moonlight.

If Manowar is the granddaddy of fantasy metal, then Dio is the sorcerer who created the dirt upon which the universe was built. While other bands dress the part and write the lyrics to take the listener into the universe they’re building, Dio is more like a creature who escaped from the songs they’re singing about and is teaching us pitiful Earthlings about the secrets of his fantasy realm. And Holy Diver is the song that gives us a sample of his world. Even when he’s not singing about lies and truth and steel and tigers, Dio is the bloodline between us and the goblins and dragons. Plus, there’s a great possibility that he popularized the metal-horns finger symbol, in spite of disagreement from Gene Simmons who claims he invented it. Before his death in 2010, Ronnie James Dio would tell stories about his grandmother showing him the finger horns before bed to keep the evil away while he slept.

5) Riot: Flight of the Warrior

A little-known heavy metal band from New York City, Riot was formed in 1975. They reached peak popularity in the mid-1980s, and their sound is properly solidified in their Thundersteel album. An amazing album from start to finish, it features incredible songs like “Signs of the Crimson Storm” (which funny enough very obviously influenced HammerFall’s own “Crimson Thunder”), “Bloodstreets”, “Where Eagles Fly”, and “Thundersteel”. But the standout track on this album goes to “Flight of the Warrior”, a thunderous, incredible story of a song that evokes images of a victorious warrior leaving the battlefield. (With the wind in their hair, no doubt!)

And come on– that cover art.

KISS is a band who is a household name with an identity problem. And truly, I mean that with full affection. I count KISS as my second favorite band in existence. I love their music catalog. (Yes, even that stuff from the 80s. “Lick it Up” and “Heaven’s on Fire” are amazing, fight me).

But before they took off the makeup (but after the dreaded disco album ‘Dynasty’), KISS wrote a fantasy-inspired concept album called ‘Music from The Elder”. And the results are…mixed. It primarily features Paul Stanley singing in his high falsetto (he is a boy that becomes a man by the end of the “story”, you know). However, there is one stand out track on this album and it’s called “The Oath”. The lyrics hit the head on all the fantasy nails, from flames, swords, glory, riding, and so on. I want to say this is also the last album Ace Frehley fully performed on, because by the next album “Creatures of the Night”, he was all but checked out.

And seriously– these Elder-era tour costumes KISS wears are just incredible. I’d wear Paul’s outfit on the regular, complete with purple headband, just because it’s Tuesday or whatever. Truly, “Music From The Elder” was a special time in KISStory.

The definition of “special” is up to subjective speculation.

Stratovarius is a Finnish power metal band that formed in 1984. Along with Helloween, Blind Guardian, and Gamma Ray, they’re considered one of the most influential power metal bands. While I’m not a huge fan of all of their songs, their sound won me over with “Eagleheart”, or as I affectionately call it, a song that “out Power Rangers the Power Rangers theme”. It conjures images of MST3K’s Cave Dwellers, or Attor the Flying Eagle  which in essence, is a Conan the Barbarian ripoff. Therefore, every time I hear this song I think of that scene in Cave Dwellers where Miles O’Keefe, in complete “medieval warrior” clothes is flying on a hang glider. None of this making sense?

Just enjoy the song and ignore me, my metal hearts.

2) Powerwolf: Army of the Night

Powerwolf: Another band that combines two kick ass words to create an amazing band name. These guys, from Germany, are different from some of the other bands on our list. Instead of creating a world based on traditional fantasy elements, they season their darkly themed songs with religious imagery and lots and lots of “Hallelujahs”. “Army of the Night” combines that heavy “Attack on Titans” theme songs with the timing of the “Sailor Moon Crystal” theme to create a sexy anthem where you’re not sure if you’re a night soldier, a sex zombie, or someone giving religion the middle finger.

But either way, a darkly delicious universe unfolds and we want nothing more than to be part of this Army of the Night!

Twilight Force takes the fantasy metal power cake. No explanations needed. Watch the video. You will be enlightened.

Did we miss any of your favorite nerdy-fantasy-DnD-style-fighting warrior riding a steel horse power anthems? Tell Nerdbot about them in the comments!