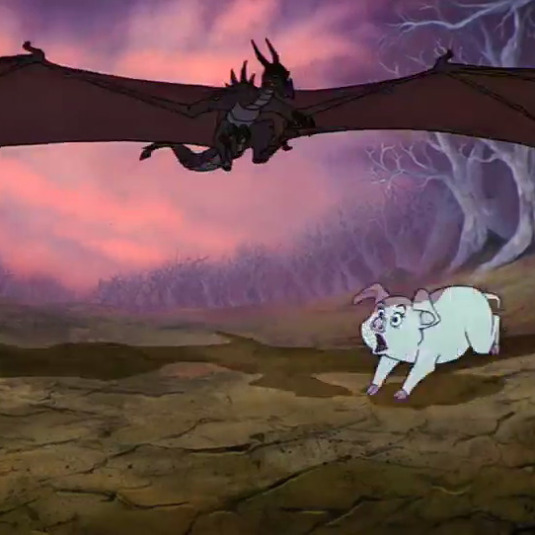 Movies for the family often have scenes that might be considered a bit intense for younger kids. Likely, every movie buff can think of a scene that scared or upset them as a child. However, some movies have scenes so unsettling that you simply can’t forget or forgive the film makers even as an adult. Some of them make you sit up and think “What the hell made them think this was okay?” or “who wrote this? the Marquis De Sade?” Exactly! Thus, prepare to be disturbed as you read about four worrisome, messed up moments in “children’s” cinema.

This animated sci-fi action adventure fantasy was made when Return of The Jedi was only three years old, and believe me, you can see Star Wars influence all over it.

Looking back, it’s hard to believe this movie was rated PG in the UK. Particularly after the ridiculous furor that happened here with the so called “Video Nasties” and the Video recordings act of 1984. This film contains a myriad of quite surprising and controversial moments, but none quite as unsettling as the one I’m about to talk about.

Early in the film our hero Orin has escaped his life of slavery in the mines below the surface of the planet Trinia. He encounters a large group of sinister malformed creatures who are part organic and part machine (referred to as “Man Droids”). Their bodies are decaying and so in order to survive they must keep on replacing their damaged living parts with mechanical ones. It is in this same scene that we are introduced to Dagg (think Han Solo but more of a jerk) who shoots one of the creatures dead when they attack him. Before the body even has a chance to grow cold the surviving creatures all converge on the corpse, ready to cannablise their unfortunate former comrade for spare parts. The creature in front leers at the camera, snipping his large surgical shears with anticipation. Urggggghhhhh…….gives me a bit of a shiver just thinking about it!

When this movie came up in conversation recently, my friend and I discussed our first viewing of it. I told him about finding this scene really creepy. He told me that when it first came out on rental and he rented it out he actually checked the rating sticker thinking maybe they’d made a mistake.

Me: “Was that after the corpse mutilation bit?”

“Honestly…I can’t remember if it was that bit, the giant leeches, the implied sex trade references or the bit where the female robot’s ass circuitry is tinkered with to make her into a subservient bimbo-bot.”

Yeah……about 60% of this movie is not fine for children

Despite containing many adorable Disney tropes, don’t be fooled, The Black Cauldron is the closest the house of mouse ever came to making an animated horror movie. The main character Taran is a pig farmer who is caught up in adventure trying to protect a clairvoyant pig from the evil sorcerer the horned king. This is where things get creepy. The horned king is pure nightmare fuel. As you may have guessed from his moniker he has demonic horns protruding from his skull, not to mention fangs instead of regular teeth. He wants the pig’s abilities so that he can divine the location of the titular black cauldron that can give life to an undead army of fallen warriors known as the “cauldron born”.

Did I mention that the only way to stop the cauldron’s evil power is to willingly kill yourself by jumping into it?

Everyone I’ve spoken to over the years about this film remembers the horned king’s introduction. The moment we see under his hood and get to peer at the evil within terrified me as a kid. What makes it more troubling is that seconds after his face is revealed he leans right into the screen and reaches out towards a pile of bones. In the cinema it looked as if he was reaching towards the audience and I swear my five-year-old heart felt like it was going to stop for a second!

One look at this character tells you everything you need to know, he is evil incarnate, without mercy, pity or any semblance of reason, empathy or understanding. His only real desire is to kill all living things and populate the world with the undead. The hell Disney?! And some people think Cruella De Ville is a scary Disney Villain!

Think of the Jim Henson company and you might picture sitting in front of the TV as a child being taught stuff by Big Bird and his pals or watching poor Kermit get Karate chopped across the room by Miss Piggy. However, the fantasy movies that Jim Henson directed are another thing entirely. Labyrinth is well known for having its share of creepy moments (as well as an abundance of Bowie bulge) however it’s Dark Crystal that gives a reading of 10 on the disturb-o-meter.

In the film the two unlikely heroes Jen and Kira try to restore the titular dark crystal’s integrity to bring order back to the universe and rid the world of the evil creatures the Skeksis.

Now the Skeksis themselves are creepy mo-fos. For one thing they look like demonic, desecrated birds which is unsettling on its own.  However, one scene that it is burned into my retinas to this day is the essence stealing scene. In the scene in question the Skesis “scientist” (a more adequate description would be torturer) grabs a harmless little podling creature from his cage and puts him in a horrible medieval looking chair with restraints.

“It won’t hurt” he says “we just want to drain your living essence. Then you can be the same as the other podlings here. A slave.”

He then instructs one of the aforementioned slaves to open the wall which reveals the dark crystal itself. Positioning a reflective device, they refract a beam of energy from the dark crystal into the podling’s stunned little face. His breathing gets heavier and heavier as every aspect of his being is drained leaving him an aged and mindless zombie with scraps of grey hair and lifeless, empty eyes.

So far so fucked up. Except it somehow gets worse. When the Skesis scientist says essence he means it literally, a tube attached to the unfortunate podling collects a liquid that the scientist puts into a test tube-like container.

“You’re very lucky slave” he says “Only the Emperor gets to drink your essence”.

He then hands it to the emperor of the Skeksis who knocks it back like a frosty beer on a sunny day. There is something profoundly wrong about the entire concept of this scene. It’s bad enough that this little creature’s entire personality and hopes, dreams and fears are erased making him a living vegetable but then someone drinking his mind in liquid form? That’s just plain sinister.

As if director Martin Rosen hadn’t psychologically scarred enough children with Bigwig’s bloody and protracted fight scene and visions of rabbit apocalypses in Watership Down he returned with an even more harrowing film in The Plague Dogs (based on another book by Watership Down’s author Richard Adams).

The basic plot concerns two dogs called Rowf and Snitter who manage to escape a laboratory that just so happens to be doing extremely dangerous research with lethal diseases. The origin of the research isn’t clearly explained in the film however one thing IS made abundantly clear. The dogs getting out into the general population would be deadly……and so they must be destroyed at all costs.

Thus begins a canine adventure movie like no other which is both poignant and horribly sad in places. Honestly, I struggle to pick the scene that stayed with me the most in this film but this one is certainly the most alarming.

Snitter is the more trusting of the two dogs and he holds out hope that they can live out the rest of their days with a human master whereas Rowf has nothing but distrust for all humans. Due to his trusting nature in one scene Snitter runs up to a friendly man who is whistling and urging for him to come towards him. The man has a rifle at his feet and when Snitter runs towards him and jumps up excitedly one of his back legs rests on the rifle’s trigger…accidentally blowing the kind man’s face off!

Now If the viewer just saw Snitter looking shocked and fleeing then the scene would still be horrible but it actually shows the poor guy screaming in agony and holding his bleeding (and likely non-existent) face before he collapses to the ground. Then there’s the music! It plays the creepiest horror movie music as he dies just to ensure that it worked its way into my young psyche FOREVER.

This is number one on the list because this really troubled me as a child. I guess I wasn’t alone because subsequent VHS releases throughout the 80’s and 90’s were missing this scene (along with a few other dark moments in this film) until they were restored in a 2008 DVD release.

Well that’s it. I hope you’ve been entertained by this hellish trip into the depths of my now fragile and haunted brain.

Craig is a writer with a Retro Anime Blog.