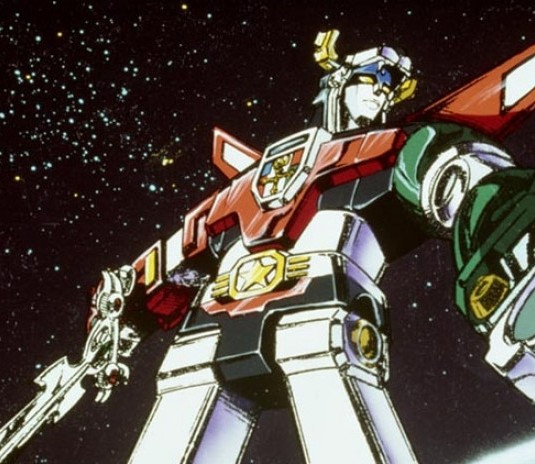 Nostalgia is a tricky situation for me.

My childhood was filled with noble robots who turned into various trucks, other robots who could combine, and various anthropomorphic adventurers who filled my afternoons with glee. But I also understand that I watched these things with rose colored glasses. (As opposed to the whiskey filled ones I watch things with now).

I realized that there’s some stuff you shouldn’t go back to. And there was one show that proved that point. And it hurt.

Because that show was Voltron.

The night I re-watched it my eyes opened wider than a twacked-out Powerpuff Girl. And here are some reasons why it proves that sometimes nostalgia is best left alone.

As a fan, I know animation has made leaps and bounds since the 80s. And back in the day we all know that they used to reuse backgrounds and certain scenes. But there are parts of this show that are literally a person reacting one way and then cutting back to a previous frame. It’s jarring.

It’s the spliced together scene from The Simpsons where they make the Radioactive Man movie and Milhouse goes missing.

You know exactly which scene I’m talking about.

At one point in an episode, during a “training session” one character says to another “You couldn’t hit me if a stood still” and then promptly they don’t move the character for a while. That’s the “I’m fine to drive but who has my keys?” of animation.

It would be one thing if it were just dated. That’s understandable. But it’s just bad. I know the difference between a lion staying still, and then a robot staying still but suddenly shooting lightning out of it’s tail.  My childhood notebooks are full of various mammals shooting various things from their backsides.

In the show’s defense, it was chopped and put back together to make it friendly for children in an America that pretended it didn’t love violence.

4) What is Voltron Even?

Peter Cullen (Optimus M’Fing Prime) does the voice over for the intro. And as far as positive nostalgia, hearing the sweet honeyed tones of Peter Cullen tends to save everything it surrounds. I could receive not only bad medical news from him, I could receive news of every break up I’ve ever had and all worldly disasters in one night and still feel soothed.

It’s what he says in this situation that’s bananas.

“From days of long ago, from uncharted regions of the universe, comes a legend; the legend of Voltron, Defender of the Universe, a mighty robot, loved by good, feared by evil. As Voltron’s legend grew, peace settled across the galaxy. On Planet Earth, a Galaxy Alliance was formed. Together with the good planets of the solar system, they maintained peace throughout the universe, until a new horrible menace threatened the galaxy. Voltron was needed once more. This is the story of the super force of space explorers, specially trained and sent by the Alliance to bring back Voltron, Defender of the Universe!”

So…Voltron is…the last unicorn? Well I guess the last 5 magical lion unicorns. But was always around? As in like he’s it’s just been there forever? Like there’s no Excalibur moment here. No heroic discovery. Voltron is favorited in the GoMaps function of this society. It seems to go like this:

“We need a Voltron. Go Get A Voltron.”

“But how?” asks our weird protagonists.

“You’ve been specially trained, asshat” is the response from a higher up who I can only assume has a handlebar mustache.

“Word” says the only member of the team allowed to voice an opinion.

I love my MacGuffins as much as the next kid. But come on. Specially trained to do nothing until you need to find a space cat? As much as I would immediately sign up for that job, it makes no sense here.

I get that shows need cute sidekicks. I was a kid. I wanted to be the sidekick. I wanted to be Robin. I wanted to have a rich duck uncle who flew me around the world. I was just old enough to not fall for Jar-Jar. The partner is essential.

I draw my line at space mice.

Not just mice that happen to be from another planet. They happen to be smart. No there has to be more. Otherwise it would be absurd!

Nerp. They also have hidden passageways throughout the crazy castle. This allows them to be where ever they are needed. Because apparently, they are always needed.

In one episode they hide in the Princesses hair. She shakes them out and sends them off on a mission.

Isn’t Pidge supposed to be the youthful partner? Smart as all get out but still inexperienced, Pidge figures out solutions no one else would think of due to his (now her, which is awesome sauce!) intellect!

Why do we need Space Mice? Is it just to make the Princess seem that much lonelier? Her only followers on Spaceagram were the mice?

And they save the day just as often as the “specially trained” Lion pilots.

Are they really good or do the pilots really suck?

Why do I care so much about Space Mice?

2) Repetition Does Not Mean Good

I made a mistake one night as we were powering through the series and said I would take a drink every time I heard that phrase at some point.

After one episode where I literally couldn’t go more than 7 minutes without Voltron being put together (I believe it was the episode where they got their groove back) I decided this game was stupid and quit. I couldn’t believe that every episode they dedicated this much time to putting itself together, forming the head, and then swooshing for a while.

But knowing more now then what I knew then, I understood that this was a smart way to save money and time if you can chew up 3 minutes in a 20-minute cartoon?

And no one can bitch?

Of course! This was before the internet and if you had a problem, even odds you had to settle it with someone in a playground via full contact hopscotch.

However, it makes watching the episodes a bore. You know when the call is going to happen. You know it’ll be solved before you finish your drink. Hell, your eyes might still be rolling into the back of your head by the time the finale comes around.

Which brings me to my final point….

I am by my very nature sarcastic and cautious. My first word to a person that wasn’t my Mother or Father was…

I get it. I question every reboot of anything I see. But I am also weirdly sentimental. When I saw the first Transformers movie, I was mad but when Optimus Prime talked while Linkin Park played, two parts of my adolescence combined and I felt ok. I bought a DVD set of the movie because the box transformed!

Would I want the ridiculous sequels? Of course not. Tell 6-year-old me I would rather watch a British story about a man running away from home in a phone booth instead of Ninja Turtles, I would probably have thrown a toy truck at your face.

But as an adult, I realize some stuff is just for kids. I have watched the old animated G.I. Joe movie many times since I realized that my childhood cartoons aren’t exactly “funky fresh” anymore. But I watch that movie knowing it’s pretty terrible. I love Power Rangers and don’t think I will ever not. But that’s enjoying something. Just enjoying it. But I understand the difference between loving something because it’s good to me and loving something because it’s good to almost everyone.  Knowing that makes me happy. Because when I come across someone and they tell me they love something I don’t get, it makes me ask why they love it. And the answers are always great.

And who am I kidding? I still love Voltron.